Staying when you want to leave doesn’t just hurt you, but it also hurts the person you are with. Continue reading learn about which awful excuses you shouldn’t use to delay a breakup and why you should just end the relationship and get it over with.

10Staying Together For The Kids

Kids pick up on that stuff and it is not good for them to be around that type of negativity. It is better to part ways if that is what you truly want. But try to keep things cordial for the children’s sake. Learn to co-parent together while living separately.

Staying with someone just because you think they’ll change is not a valid reason for delaying a breakup. Some people are simply not capable of change and that is something that you’re going to have to learn to understand.

Plus, we shouldn’t be trying to change people to begin with unless it’s a life-threatening situation. It is one of those things where you are going to have to learn to live with whatever he is doing that is bothering you, or you are going to have to leave. If you are waiting for him to change, you are better off getting it over with and putting an end to the relationship now.

An awful reason for delaying a breakup if you really don’t want to be with someone would be to stay just because you feel like you can’t do any better. Don’t ever tell yourself that you can’t do better because there will be someone out there for you that will treat you the way you are supposed to be treated.

RELATED: Prepare Yourself: 10 Signs He Is Going To Ghost You

If your thinking is like that, a part of you already knows that you want to leave or that the relationship is already basically over. If you don’t leave, you would just be settling and you deserve so much more than that.

7You’re Close To His Family Or Friends

If you are not too fond of your significant other and have been wanting to break up with him, but you decide to delay the breakup just because you are close to one of his family members or friends; that is not a good thing to do. You may be scared of losing them if you were to leave him, but not everyone who enters your life is meant to stay.

You would basically be using him for who he knows. It is almost guaranteed that if the roles were reversed, you would not want to be used in this manner. You would most likely prefer to be dumped instead. So, instead of using him, you should just get it over with and leave him.

When the holidays roll around, people usually think of being with their loved ones and this usually includes being with your significant other. But if you’re delaying a breakup because it’s a holiday, you’re not really helping anyone or making the situation any better.

RELATED: 10 Things Men Do That Drive Women Insane (In A Bad Way)

You’re falsely making it seem like everything is okay with your relationship when it really isn’t. It’s best to just get the breakup over with so that you’re taking care of your needs as well as not leading your guy on.

5They Have A Good Heart

Just because your significant other has a good heart, doesn’t mean that you have to make yourself unhappy by staying with him. This is not a good reason to delay a breakup by any means. You partner could have a heart of gold and that should not matter if you no longer want to be with him.

While you may be making him happy by staying, the only thing you are doing for yourself is most likely making yourself miserable. Now is a better time than ever to end the relationship.

4Bedtime Play Is The Best Ever

While it may seem tempting to stay with someone who is absolutely amazing during adult time, that is not a good enough excuse to stay in a relationship that you don’t necessarily want to be in.

We can tell when a relationship has run its course, and if bedtime play is the only thing keeping you together it is time to move on. If you stay when you want to leave, you could potentially be missing out on something that is even better.

3You’re Afraid To Be Alone

If you have never really been alone, it can feel a bit scary or maybe even intimidating at first. But it does get easier. If you are delaying a breakup for the sole reason that you are afraid of being alone, then it’s time to put the relationship behind you so that you can move forward.

You should get used to being independent and being on your own. The only person who will ever fully have your back 100 percent is yourself.

2He’s Going Through A Rough Patch

We have all gone through rough patches in our lives. Yes, being with someone can make those rough times seem more bearable, but that shouldn’t be the glue that holds a relationship together.

This may sound a bit cold, but he is going to go through obstacles and challenges regardless of whether you stay with him or not. If you delay the breakup because of this, by the time you finally decide to call it quits, he is just going to be going through yet another tough time – the ending of your relationship. Life is full of bad times, and we can’t shelter everyone for the rest of our lives without risking our own happiness.

1You’re Comfortable Right Where You Are

If the spark in your relationship has faded some time ago, there is nothing left to hang on for. If you don’t want to be with someone any longer, you can’t help the way you feel. They say that the mind checks out of a relationship before the physical body does. If your mind checked out a while ago, it is time to walk away and make room for something better. 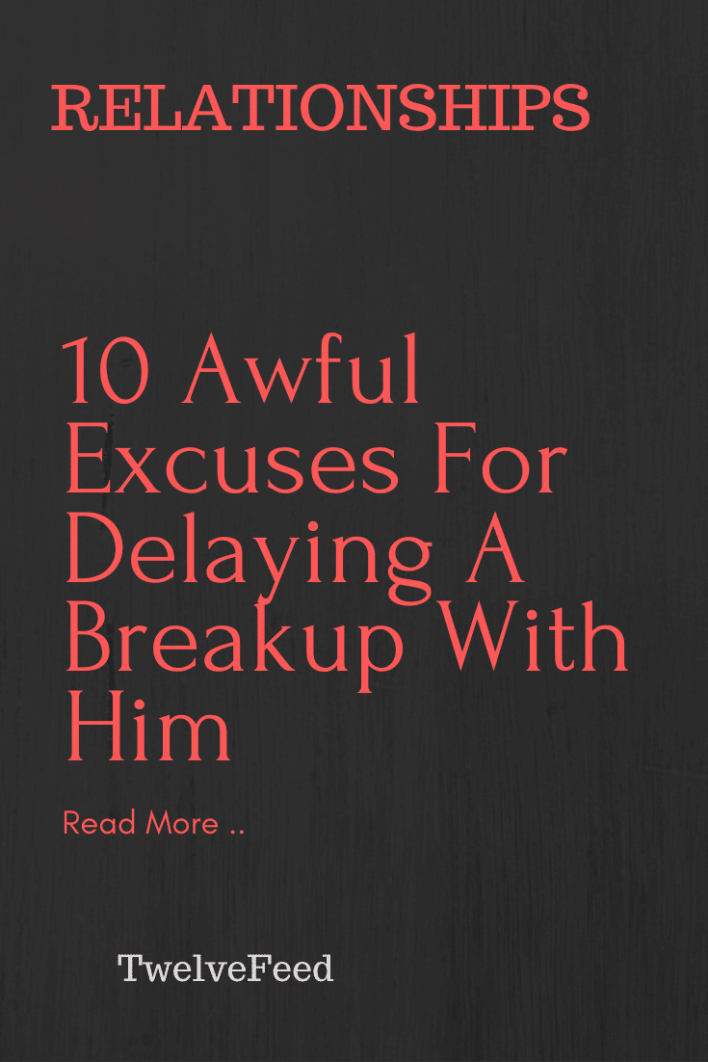 10 Reasons You Should Be Single Right Now

He’s Not The One: 22 Emotional Red Flags That Prove It