Has your man ever sulked or walked away in a huff for no reason?

Chances are, he’s a weirdo, or you’ve probably had an annoying girlfriend moment!

Here is a list of annoying habits that could annoy most guys. Avoid indulging in them, but if you really don’t have a choice, try to be subtle about it.

#1 Talking about relationship issues with others

Even the best of relationships does have its own share of ups and downs.

When a guy’s having a hard time in the relationship, he shuts himself up and gets surly.

When a girl’s having a hard time in love, she tweets about it, posts it on the wall, and calls her friends and whines about what a shitty boyfriend she has.

Now of course, all girls don’t do this.

But if you do, well, you know you’re on this list of annoying girlfriends. Guys hate washing their dirty underwear in public.

They don’t like talking about a bad relationship and they really don’t think they need any advice on love.

#2 When you keep talking when he’s playing

When a guy plays a multiplayer game on his Xbox or even if he’s just playing solo, he really doesn’t like talking, especially about gossip or relationship stuff. While women may use games for recreation, men don’t. They play games to win and stroke their ego. So each time your man’s “relaxing” and playing, he’s actually having an adrenalin rush.

By talking to him incessantly when he’s playing, all you’re going to hear is “uhh huh… hmm…” and a few other monosyllabic replies. But inside his frustrated head, all he wants to do is point the weapon in his game in your direction.

#3 When you leave him with a hard on

Girls love cuddles, and men understand that. But if you like a lot of foreplay and no real play, it’s obviously going to annoy your man. Men don’t mind a bit of physical affection, but they do want to take it further, especially if you’ve left a man hard and wanting more. [Read: How to turn a guy on]

And what’s really worse is when he complains to you about blue balls and you brush it off as a stupid excuse to have sex. Seriously, it’s definitely an annoying girlfriend trait when you warm a guy up and leave him on the couch and tell him to use his hands.

#4 Men hate it when they’re not given their space

So if you ever find your man doing something by himself, you can definitely ask him if he needs help or some company, but if he says he’s happy to do it alone, learn to leave him alone with whatever he’s doing, even if he seems to be struggling. If you’re going to sit beside him and start having a conversation, well, you’re definitely inching closer to the annoying girlfriend’s territory. [Read: Importance of space in a relationship]

Men may not voice this aloud, but they appreciate silence. A lot.

Most of the time, you may see your boyfriend staring into space or just lazing away, gazing at a book or doing something silly. Men love this peace and quiet at times. When you walk into the room and talk incessantly about something or the other even when he seems uninterested or answers only in monosyllables, it’s a sign that he’s in that quiet zone and wants to be left with his own thoughts, even if he’s not really thinking.

#6 When she flirts with others and not with him

If you get touchy feely with other men and snub your boyfriend or don’t treat him better, heck, you’re going straight on top of the list of annoying girlfriends.

[Read: How to flirt with a guy without making it obvious]

#7 When you ask him if you look fat

Let’s face it, this is ridiculous. Can’t you look at yourself in the mirror and see the truth sticking out of your panty line? All men already know what to answer when their girlfriend asks this dreaded question.

There’s just no other way to answer it. If your man ever did tell you that your butt looked ugly, would you still wear that sexy little dress and go out with him? Of course, you wouldn’t. Many girls ask their boyfriends the same question, every day and every time they try on a new dress or wear an old dress. While it may be a sure sign of happy security when you ask a man such intimate questions, it’s the kind of question where the answer just won’t change.

Do you want your man to tell you the truth? Start working out and ask him if you look fat. Chances are, he’ll be so impressed by your new physique, he’ll probably mention that you’ve lost a lot of weight and look so darn sexy! This way, you’ll at least know if you were fat last month.

#8 When you don’t understand his passions

Men are passionate about a lot of things. They may be useless or even silly, but to a man, it’s his passion be it cars, bikes, guy time or even fishing. Guys hate it when their girlfriends don’t understand their passion or tell them to grow up and stop behaving like a child. It’s definitely an annoying girlfriend trait when a girlfriend can’t understand what her own man loves and what he doesn’t. [Read: Why men need guy time]

But if you do want to win brownie points here, spend a while with him and genuinely try to understand his passion. Chances are, you may end up loving it too. And hey, that would definitely make you the best girlfriend!

#9 When his girlfriend constantly tries to change him

Most men do understand that women love to make a pet project out of their boyfriends. If they’re not painting his nails or cheeks when he’s asleep, they’re trying their best to make him a better man by pushing him into doing something he doesn’t like or doesn’t want to do.

Men don’t hate it when their girlfriends try to change them, but they hate it when their girlfriends start pushing them away from what they like and force them into doing something they absolutely hate. Want a few small examples? Eat salads, don’t eat so much meat. Watch opera, they’re better than those stupid movies. Watch romantic movies, Lord of the Ring sucks. Get the drift?

#10 When she’s too clingy or too independent

This may seem weird, men don’t want their girlfriends to be clingy and yet, they don’t want them to be too independent. But it does make sense if you think about it.

Some girlfriends want their boyfriends in their arms no matter what they’re doing, from buying tampons to going out with their girlfriends. And on the other hand, some girls *feminists* want to open the door themselves, get on top all the time, and don’t bother calling their boyfriends even if they’re packing their bags to go on a business meeting in another state.

while men do understand the need to be overly clingy or way too independent, it does take a bit of moderation to have a happy relationship, don’t you think? Lose the moderation and you’d end up being an annoying girlfriend. 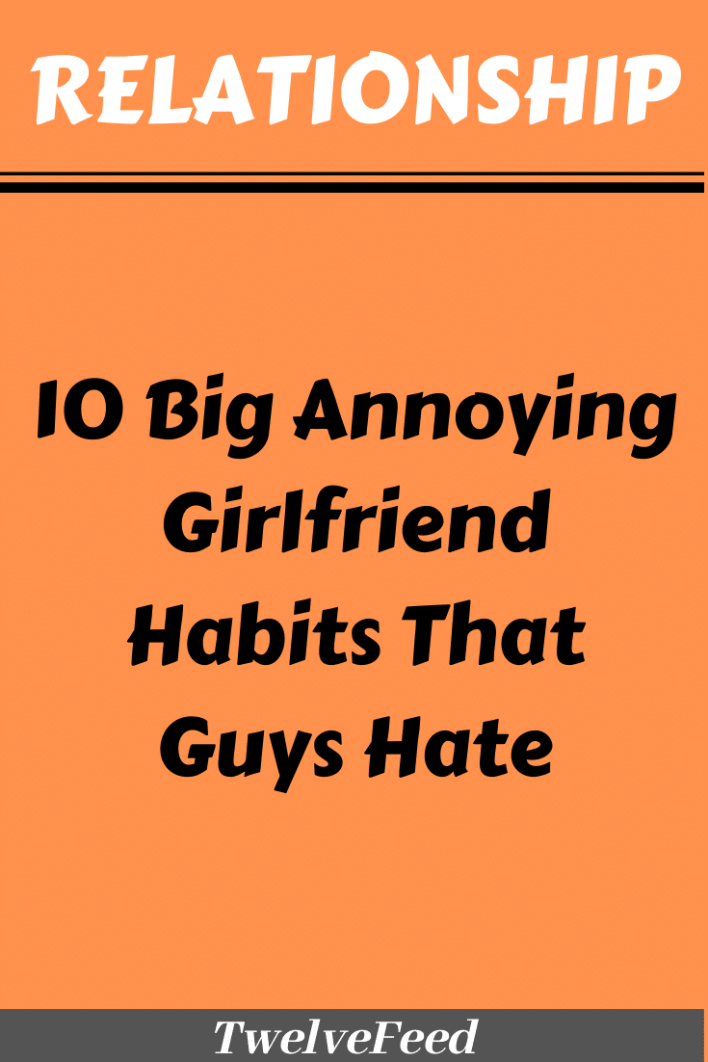 The Best Compliment Someone Could Give You, Based On Your Zodiac Sign

Love or Career? – How to Make the Right Choice