Many guys can be creepy for a lot of reasons.

Some guys are creepy because they laugh like they’ve been living in a horror flick.

Some guys are creepy because they smell like bad sex.

[Read: 20 things that turn a guy on sexually about a girl]

What makes a guy creepy?

Sometimes, even the nicest of guys can turn out to be creepy guys.

After all, creepy is subjective and what may seem desirable to one girl can seem creepy to another.

[Read: The story of a nice guy who ended up becoming a creepy clingy guy]

But we’ve all been there.

You’re walking on a street and bump into an annoying guy or are introduced to a guy you just can’t shake off. And they’re all creepy in their own ways.

But what makes a guy creepy really?

Almost all the time, it’s an unexplainable feeling of discomfort and awkwardness. You can’t really explain it, but you feel miserable spending time with this person.

But what’s the easiest way to define a creepy guy? Well, a creepy guy is anyone who shows interest in a girl when the girl doesn’t fancy him back at all.

It’s not fair to most guys, but if a guy can’t take a hint that you don’t like him, you have a right to brand him as your personal creepy guy. [Read: How to be just friends when he wants more]

There are some mildly creepy guys, and then we have the scary creepy guys. If you’re attracting the attention of a guy you don’t like, and he exhibits any of these 10 creepy guy signs, it’s time for you to back away and keep him away from you.

#1 The boob staring creepy guy. This is the guy who can’t help staring down your cleavage all the time. He thinks he’s too smart to get caught staring down your tee, but he gets caught anyway. And no matter how many times you catch him, nothing stops him from trying to stare at your breasts.

He’s a creepy guy with lust on his mind. If an unfanciable guy constantly stares you up and down like he wants to eat you, he’s definitely a creepy guy you need to avoid. [Read: Why do guys like breasts like crazy?]

#2 The touchy feely creepy guy. This is the creepy guy that can gross you out. He’s extremely touchy even when you don’t reciprocate his moves. He uses any excuse to touch you or, gasp, hug you! He holds your hand for no reason and runs his hand along your back until you bend your back like a contortionist and duck away from his side.

He’s the guy who may eventually reach his hands out to the front of your shirt in the heat of the moment. If a guy touches you and the hair on your hands start to stand, he’s definitely the touchy feely creepy guy.

#3 The personal space creepy guy. Do you have a friend or a colleague who just doesn’t understand the meaning of personal space? If you know a guy who stands so close to you that you can smell yesterday’s breakfast on his breath, he’s definitely a creepy guy that needs to be avoided.

He doesn’t understand social etiquette and he’s definitely getting close to you for a reason. Better push him away before he thinks you enjoy the intermingling of both your personal spaces. [Read: The 7 stages of love for men]

#4 The dirty talking creepy guy. Do you know a guy who thinks he’s a smooth dirty talker when he’s definitely not? If a guy talks about your visible bra strap or how sexy your ass looks today even when you tell him off, he’s a creepy guy you need to avoid.

He may assume that both of you are actually exchanging fun, sexy conversations with each other. What’s next, he may want to have sex with you!

#5 The rich boastful creepy guy. Well, what do you say about this one? He’s rich, but he’s completely obnoxious. He boasts and brags, and think all women must strip down and bow before him and his riches. If a braggart of a rich guy hits on you, and you don’t like him back, walk away from him before he starts wooing you and embarrassing you all the time. [Read: Are insecure guys ever worth dating?]

#6 The creepy fetish guy. Have you ever dated a guy who seems to have a lot of crazy fetishes? Unless you share his interests or are deeply in love with him already, end any relationships with crazy fetish guys who go overboard with their fetishes.

#7 The creepy stalker guy. Has a guy professed his undying love for you recently? Does he now spend all his time following you around town no matter where you are? The creepy stalker guy is the guy who thinks he’s being cool and persuasive by trailing you everywhere. Avoid him, don’t give him any attention and try to give him the slip.

#8 The older creepy guy. Does your dad’s friend hit on you? Old creepy guys are the weirdest of the lot! They’re socially cuckoo and desperate for attention from young perky people. They assume younger girls are easier to get, because they can’t ever get a date with women their own age. If you have an older friend who tries to behave like a touchy feely creepy guy, he’s surely an older creepy guy you need to get away from.

#9 The staring creepy guy. Do you exchange glances with interesting guys at a coffee shop? Then you’ve definitely meet Mr. Staring Creepy Guy. He’s the guy who drops everything else and stares at you with a vengeance. He stares hard, with an eye watering lingering gaze that stretches into an eerie smile each time you look at him. [Read: What kind of men stare at women?]

#10 The loving creepy guy. He’s obsessed with you, and no matter what you say, he just thinks you’re playing hard to get. This is romantic nightmare, and he’d do anything to try and win your attention and your love. There’s not much you can do to get him off your back because he just won’t believe you don’t love him back. The only thing you can do with this creepy guy is play nice. 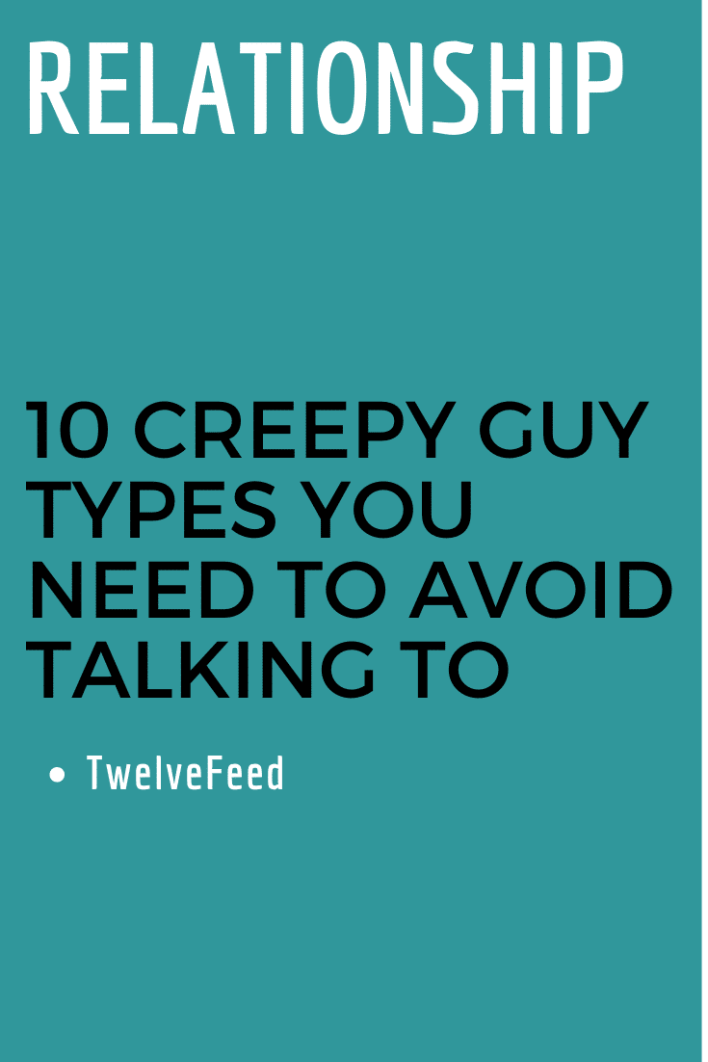 13 Secret Signs Your Boyfriend’s Not Over His Ex

How to be a Happy Couple That’s Envied by All