We guys are definitely the inferior half of the species when it comes to navigating our ways around the stony seas of relationships. If we manage to sail the full course without ending up shipwrecked, then we can either congratulate ourselves on a sterling performance or, being the more likely of the two cases, thank whichever guardian angel has been protecting us from ourselves.

That’s because the male members of the human race have an uncanny knack of putting their size twelves firmly in their own mouths when it comes to keeping the opposite sex sweet.

Why we do what we do

How many times have you blurted out something potentially relationship-threatening, and then immediately regretted it – wondering what it was that possessed you to say it in the first place? It basically comes down to a less developed ability to empathize in men.

Women can usually put themselves in someone else’s position and immediately identify the potential to upset and/or insult. That’s why, if a woman says something hurtful even if pretending not to be aware, you can bet your bottom dollar that she meant it.

Men are quite the opposite. Lacking an advanced understanding of what makes the people in their immediate environment tick, they blunder forward with unimaginable crassness… At the least, to the female mind. And there’s the problem. Being so aware of other people’s feelings themselves, women find it hard to believe that our oblivious bumblings weren’t intentional.

10 sentences never to be uttered in front of your girlfriend

So, in order to help you guys avoid starting off World War 3 at home, read on for the most common mistakes we make, and how to avoid them.

#1 “Don’t be so emotional.” Great start, guys! If you had to put together a top ten list of male chauvinist one liners, that would be right up there. In your mind, you may just be advising her to calm down and take a more logical line in the conversation, but to her mind, you are saying a whole lot more.

To her, you are making the assumption that she is incapable of logical thought, that this pointed flaw extends to the whole of her gender, and that you are making a statement about your own ability to control your emotions without fail.

Hypocrisy, gender stereotyping, and traditional sociological bias are not known to be particularly effective tools in dissuading the female of the species from removing your most valuable assets. And we’re not talking your coffee machine or remote-controlled helicopter!

#2 “She’s hot!” You’re probably a little confused over this one. How could the focus of your affections object to being called hot? Well, she probably wouldn’t – not if you were the one committing to the compliment, of course. However, walking down the street hand-in-hand with her and handing this most caveman-like of compliments to a female passerby is going to seriously make her reconsider the whole relationship.

If you can’t work out what’s wrong with so graciously sharing the love in this manner, then just put yourself in her shoes for a moment. Would you be happy if she said the same thing about a male passerby? No? Isn’t empathy a wonderful thing?

#3 “You look terrible.” In the immortal words of Homer Simpson… D’OH! She could be sick, tired, emotionally strained, battered by high winds or fierce heat, and looking like something the cat just dragged in, but keep it to yourself. No matter how insistent that male urge to blurt out the unadulterated truth is, try to find a way to suppress it.

Pay her a compliment, make her feel better about herself. If she looks so rotten that it would feel like an outright lie to do this, then just keep your mouth shut and say nothing at all. If you don’t heed this advice, then don’t complain if you end up sleeping on the sofa without privileges for the next week.

#4 “You’re wrong.” Not only is this an unacceptable insult whatever the gender, even if you have irrefutable proof of the matter, you’re also digging a hole for yourself if you say this to a woman. Seriously, women can dig up conversations from 79 separate points in time, and simultaneously weave them into an argument-driven web of such complexity that you end up tied in knots.

At the end of it all, they will not only feel offended, but also justified in their response. And what an insufferable combination that is.

#5 “Is it your time of the month?” Wow! Who would say this? Oh yeah – half the male population of the planet earth. Putting a woman’s behavior entirely down to her menstrual cycle, using it as an excuse to write off anything she has to say or anything she does, is not the way forward. It would be the equivalent of her dismissing anything you have to say any time you’re sporting an erection.

#6 “Where are you going?” Not when said out of general interest, but in a hounding, possessive, and controlling way. Women have as much right to roam this earth and pursue their own interests as men do, and treating them as cattle will not earn you any brownie points.

#7 “When’s your birthday?” Really? Come on, guys. Nothing is more likely to annoy your significant other than forgetting an important date such as a birthday or anniversary. It makes her feel unwanted and unimportant, and it only serves to make you look like a dolt. If you really have forgotten, then find out through another source. That way, you’ll save your relationship and your testicles from being forcibly removed.

#8 “That looks dreadful on you.” Mouth and brain disengaged. If she’s wearing something that you really don’t like, then please hold back from being quite so blunt. Tell her it looks nice, but then suggest another dress, and say you think that would look even nicer, more appropriate perhaps.

Let her know what you think about her clothes, she’ll often want you to contribute your opinion. Just make sure your comments are considerate and sensitive to her feelings.

#9 “Oh, Samantha.” Nothing wrong with this at all if your girlfriend is called Samantha. However, if Samantha is an ex-girlfriend or secret object of desire, then you’re in big trouble. Especially if committed mid-act. Our advice, if you can’t trust your tongue to say the right thing, then bite on it!

#10 “Sorry, I wasn’t listening.” We guys are in the unhappy position of falling far short of the average woman’s ability to hold effective conversation. Women can talk, listen, and muse upon what’s been said for hours at a time. To a guy, this pretty much constitutes torture. We can manage about 10 minutes before we start to think of tonight’s game, or that new PlayStation game we want, or that foxy new member of staff who just started working in the office.

Much longer than ten minutes, and we just tune everything out or try to steer the conversation around to something that we want to talk about. However, beware, for women have an uncanny ability to detect a wavering attention span and will always find a way to test you to see if you were listening.

If you get caught, you’re in trouble. To a woman’s mind, not focusing 100% upon what she has to say is not a physiological flaw – it’s a sign that you lack any respect for her, and that she doesn’t matter to you. In this case, you can say goodbye to your conjugal rights for at least the immediate future.

Think long upon these words and phrases, and make sure the next time you end up having a conversation with your special someone that you avoid using them. We won’t promise smooth waters, but heeding this advice will certainly make your journey a great deal less turbulent! 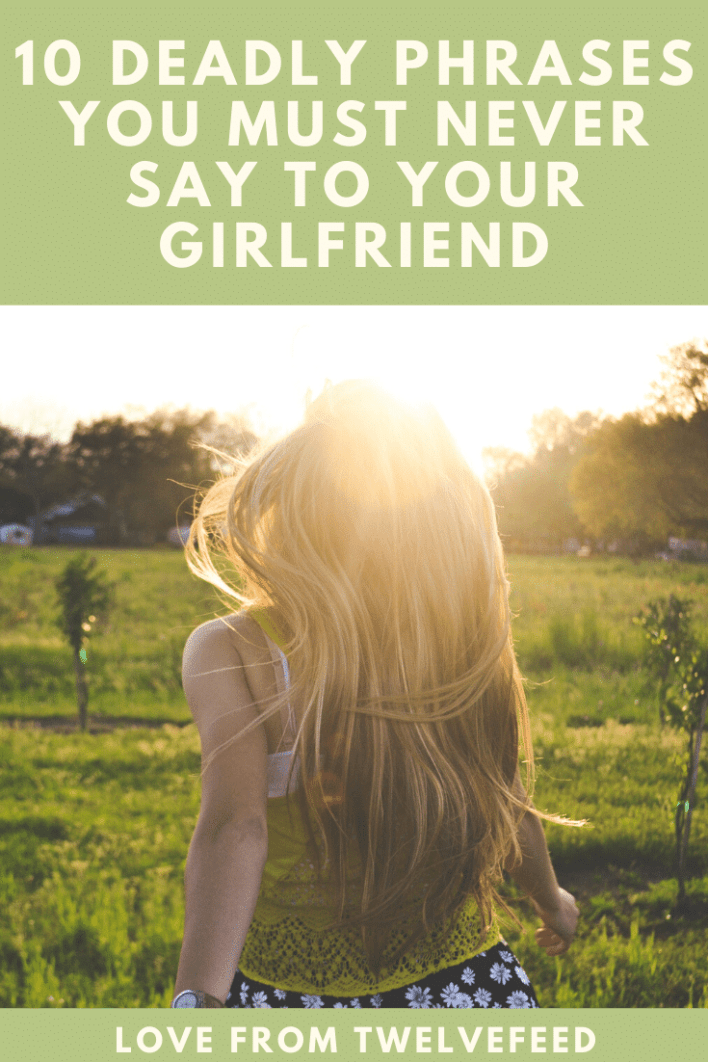 Dealing with a Boyfriend Who’s Addicted to Video Games