It could have been the dream marriage. You know, the kind of relationship that all your friends used to bring up as the perfect example of how a marriage should be. But, for some reason or other, whether triggered by particular actions or just the passage of time and the corrosive effect it can sometimes have, things turn bad.

Arguments, accusations, power plays, jealousy – a whole range of negative and destructive emotions, which seem destined to end the partnership you have formed over the years. Then comes a day when, for the sake of everyone’s sanity, divorce seems like the only sensible option. But is it really so sensible? [Read: 20 reasons for divorce that couples overlook]

Once you go down the path of divorce, there is rarely any way back, and a decision to take the relationship in this direction is one that must be thought about very carefully indeed. Just being unhappy with the situation isn’t really a valid reason to so brutally end that which you have invested so much time and emotional energy in. It is important then, to ask certain and very honest questions to yourself before you even think of filing for a divorce.

Things to consider before getting a divorce

You may already be thinking of a divorce, or you may have already made up your mind. But a little more introspection wouldn’t hurt, would it? The following list contains the ten most important of these very questions.

#1 Are you saber rattling? Not everyone has the ability to deal with things in a measured and emotionally mature manner, no matter what other great qualities and abilities they may possess. You may have lost your way in the relationship and are using the divorce card as a threat, saber rattling to get your way or make a point.

However, if your bluff is called and you’re unexpectedly taken up on your threat, or you stubbornly refuse to back down, even though it isn’t truly what you want, then things are not going to turn out well for you. Getting divorced on the back of stubbornness, pettiness, or pride will come back to haunt you, and will do so for the rest of your days. [Read: 10 ways to get through a rough patch in a relationship]

#2 Have you done enough? It seems like an obvious question to ask, but have you really done everything that you could in order to save the marriage? Of course, if you’re committed to getting out at all costs, then this isn’t a question that needs to be asked. Nor does it if there is a more serious issue at stake, like some form of abuse that exists within the relationship’s dynamic.

However, if you’re having a few pangs of regret at the idea of divorce, then it may be worth revisiting the journey to this position and being honest with yourself over whether you have truly done enough.

Have you tried to talk it out with your partner? Have you consulted family and friends? Have you seen a professional, such as a marriage counselor? If the answer is no to any of these, then you may want to hold back on your decision until you have exhausted the options. [Read: 12 signs it’s time to jump ship and leave your partner]

#3 Are you still in love? If you’re still in love with the person you intend to divorce, then you’re ignoring one of the most fundamental aspects to any salvageable relationship. Love can provide the foundation from which to rebuild those parts of your relationship that are causing so many issues. Of course, it isn’t the be all and end all, but ditching the love of your life is a step that should only very tentatively be taken.

#4 Are you being overly influenced? Friends and family will usually have your best interests at heart, but sometimes their viewpoints can be a little askew. Make sure the decision to divorce is yours, and not one you have been pressured into. [Read: 13 signs your friends are ruining your relationship for you]

#5 Will single life be better? A lot of people have strongly romanticized preconceptions of what single life is going to be like, and it’s rarely the case that the reality meets the fantasy. The first few weeks might be fun, but with a significant part of your life removed, you’re almost certainly going to find it difficult to adjust.

To begin with, the household duties and tasks were probably divided, so there are many day-to-day things that you haven’t dealt with for a long time. Friends will have their loyalties divided, and your social circle will dwindle with some of them taking a side and others just giving up on the whole friendship rather than risk one or the other’s displeasure.

But the biggest issue, of course, is loneliness. Your lifetime confidant, friend, and partner has suddenly been taken away from you, and even if all you did was argue, you will miss them keenly.

#6 Can you make it alone financially? Sometimes, you have to take material considerations into account, no matter how much you believe an issue such as divorce belongs to the realms of the heart. If you don’t have enough money in the bank to support yourself, if you’re likely to lose the house and the majority of your possessions to your wife/husband, then you may need to put things on hold until you’re in a better place. Now is not the time to jump in feet first, but the time to start putting plans in place.

#7 Can you live without the kids? If you have kids together, there is a chance, depending upon nation, region, state etc., that you’re going to lose custody. Worse, you could even lose access. Very few parents can experience such hardship well, and you could be putting your psychological health, and that of your children, at serious risk. It may be worth asking yourself if you shouldn’t wait until a more convenient juncture before committing to divorce.

#8 Can you handle the thought of step-parents? What do you think of seeing your biological child refer to someone else as their mother or father? Is that something you could live with? If not, then you may have to reassess your intentions.

#9 Are your expectations of marriage askew? Unfortunately, it’s often not the marriage itself that’s at fault but one of the couple’s expectations regarding marriage. This is something frequently seen with celebrities, who live in a somewhat fairytale world compared to the rest of us and expect their marriages to be the same.

The reality is, however, that marriage is a partnership built upon compromise and hard work. Fail to realize this, and the marriage will never work. So, ditching one marriage as a failure and expecting the next one to miraculously succeed will lead only to a string of doomed and dying partnerships. Better to hunker down, and make the most of the one you already have. [Read: 8 post-breakup questions you should be thinking about]

#10 Are they willing to give it another go? Look, if there’s even the slightest doubt in your mind over your plans to divorce, and your other half is still willing and able to give it a second go, then it might be time to lay down your arms and have an honest and frank discussion. If you can see something worth fighting for and, more importantly, if your partner is willing to confront the issues that have led you to this stage, then there’s still time to turn things around.

Filing for divorce is such a life-changing act, and it will affect you and all those around you. Make sure you’ve asked yourself the proper questions before taking the plunge. 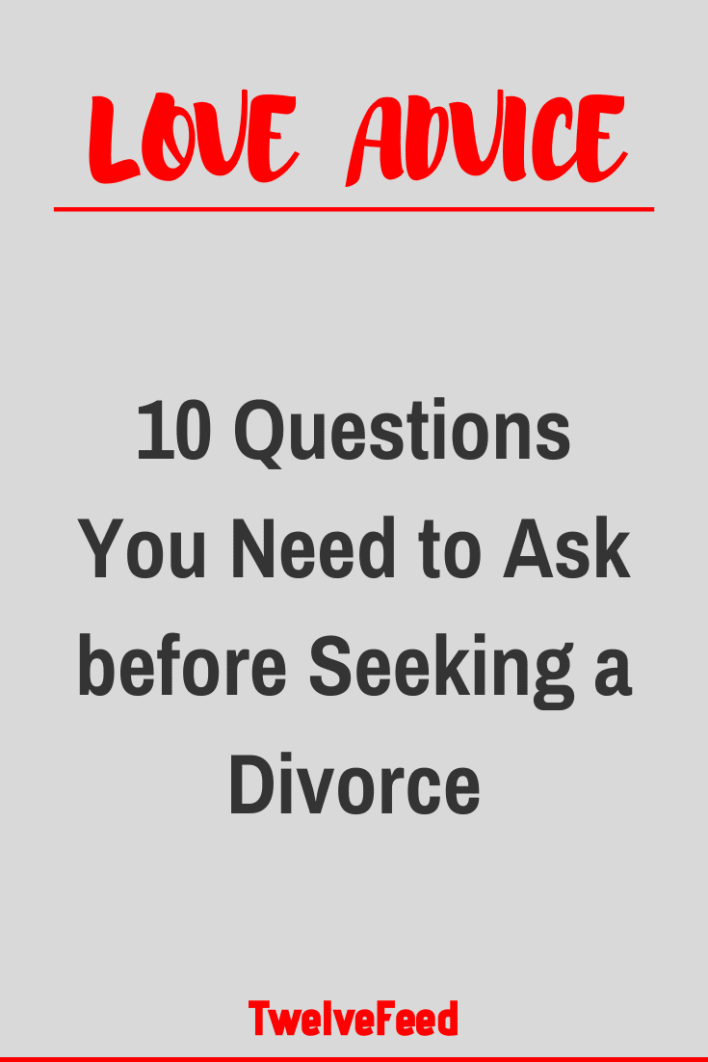 20 Ideas to Pull Off the Most Memorable Proposal Ever