Being in a relationship comes easier to some people than it does to others. That being said, for those who are unfamiliar with the normal ins and outs, it can be pretty tricky to read the warning signs. Luckily, we have put together a list of 10 signs that could show the relationship is coming to an early end. While every relationship is of course very different, there are always telltales signs when something isn’t working out.

Nobody is saying that a happy relationship means being someone’s top priority all of the time, but if early on you notice that you always seem to be low of their list of priorities, that’s a pretty telling sign. Especially at the beginning of a relationship, prioritizing a partner should feel natural, not forced.

19. It’s Going To Last: You Always Support Each Other

Whether we are talking about career support, emotional support, or simply just being there to listen to each other’s everyday struggles, the feeling of being fully supported is usually reserved for those in truly happy and committed relationships. Support is absolutely the best gift we can give to our partners.

18. Early Breakup: You Find Yourself Getting Ghosted

Being ghosted is an unfortunate reality of dating these days. However, it should NOT be a reality for someone in an actual relationship. If you find that your calls are often going unanswered or that you’re texts are never getting a reply, that could mean bad news for the relationship.

17. It’s Going To Last: The Apologies Are Always Sincere

Couples argue, that’s all part of the game. That being said, when two people truly care about each other, simple arguments and even fights should typically end in a respectful solution. When it comes time for apologies, it’s usually pretty easy to tell if someone is being sincere or not.

16. Early Breakup: Hot Dates Are Few And Far Between

While it is totally normal for the honeymoon phase to fizzle a bit, it’s still important to make sure you and your partner are putting time aside for romance. If you’re finding it hard to make time for date nights, or feel as though your partner isn’t interested in making the plans either, the relationship probably isn’t going to last much longer…

This one is just basic chemistry. We all have our own favorites scents, and this applies to people as well. When two people are attracted to each other, that attraction usually runs a lot deeper than just physical appearance. If you find yourself smelling your partner’s pillow after they’ve left, that’s a great sign of happy things to come!

When a relationship is coming to an end, it’s not always because of something personal. Some relationships just aren’t built to last. When one half of the couple starts to pull away, it’s usually not too long before the other starts to feel the distance they’ve created. Never doubt your instincts, especially when it comes to relationships!

13. It’s Going To Last: You Both Have Similar Hopes For The Future

This one is a huge sign that things are going to last. When someone is in a happy relationship, it’s natural for them to start picturing their partner as part of their future. Now, a happy future looks different to everybody, so finding someone who shares these same ideals, is truly half the battle!

12. Early Breakup: The Next Argument Is Never Far Away

As standard as arguments are in even the happiest of relationships, they shouldn’t be the only form of communication a couple has. While some couples may naturally argue more than others, it’s still important for them to note if the frequency in which the arguments are happening increases at a certain point.

11. It’s Going To Last: You’re Both Comfortable Being Your True Selves

The type of intimacy that comes along with being in a happy, long-lasting relationship, is not something that can be faked. Feeling comfortable enough with your partner to be able to let down your guard and truly be your authentic self in their presence, is a real sign of happiness.

10. Early Breakup: They Stop Asking About Your Day To Day Life

Little things like this can easily go unnoticed. That’s why, it’s important to always be fully registered when having a conversation with your partner, even if it’s just a simple “how was you day” type of chat. Should one day your partner stop asking these things, it could be a sign of them losing interest.

9. It’s Going To Last: Your Fights Aren’t Based Around Trying To Hurt Each Other

Even the most secruce couples have usually had their fair share of nasty fights. This especially becomes true once two people have started living together. While fights are natural and can sometimes even last for days on end, they should never be about trying to hurt one another. If the fights turn into each of you throwing low blows, it’s time to call it quits.

8. Early Breakup: The Future Is Never Part Of The Discussion

When we say “future” we don’t just mean chats about a potential wedding and or babies. Talking about or making plans for the future can simply mean discussing next year’s vacation. That being said, if even that sounds like something that wouldn’t come up naturally between you and your partner, there may be an underlying reason as to why…

7. It’s Going To Last: You Both Feel Adequately Listened To

It’s not fair to expect everyone to be a great listener, some people just aren’t born with that trait. However, feeling like you’re opinions and thoughts are being listened to within your relationship, is a huge sign that things are going well. Even if your partner is more chatty than they are specifically attentive, there are gestures they can make that should leave you feeling heard.

6. Early Breakup: The Potential End Of The Relationship Has Been Brought Up More Than Once

If questions like “what would would happen if we broke up?” often find their way into the conversations or arguments, that should be a red flag that something is wrong. While it’s normal to need space after a fight, two people who are truly in love don’t typically spend too much time envisioning a life without their partner.

5. It’s Going To Last: Things Are Never Boring In The Bedroom

Well, this one speaks for itself. Don’t get us wrong, everyone’s intimate relationships are different, but being on the same page as your partner when it comes to the bedroom, is a huge part of being in a long-lasting relationship. If the sparks have already left the bedroom, it’s not likely they’re coming back.

4. Early Breakup: Group Hangs Happen More Often Than One On One Dates

While dating someone who gets along with your friends is a huge bonus, it’s still important to make sure that the relationship itself doesn’t morph into a friendship over time. If you and your partner have to force alone time but feel happy committing to group plans, something’s not right.

3. It’s Going To Last: You’re Both Open About Your Pasts

We all have stuff about our pasts that we’re not proud of, or perhaps even embarrassed of. That being said, letting our partners in all of those messy details, is part of getting close to someone. If we feel as though our partner may judge us if they were to know the truth, the relationship will never reach its full potential.

2. Early Breakup: There’s A Gut Feeling That Something Is Off

When it comes to reading people and relationships, our instincts are rarely wrong. When something isn’t working within the relationship, we’ll often be left with a feeling in our gut that something is off. Don’t ignore this natural instinct, it’s your body’s way of saying it’s time to figure things out!

1. It’s Going To Last: You Aren’t Afraid Of Trying New Things Together

Feeling comfortable enough to try new things with your partner is a sign that the relationship is working. Trying new things often means breaking out of our comfort zone, which is harder for some people to do than it is for others. If we are with someone who makes this feel less scary, that means the trust is real! 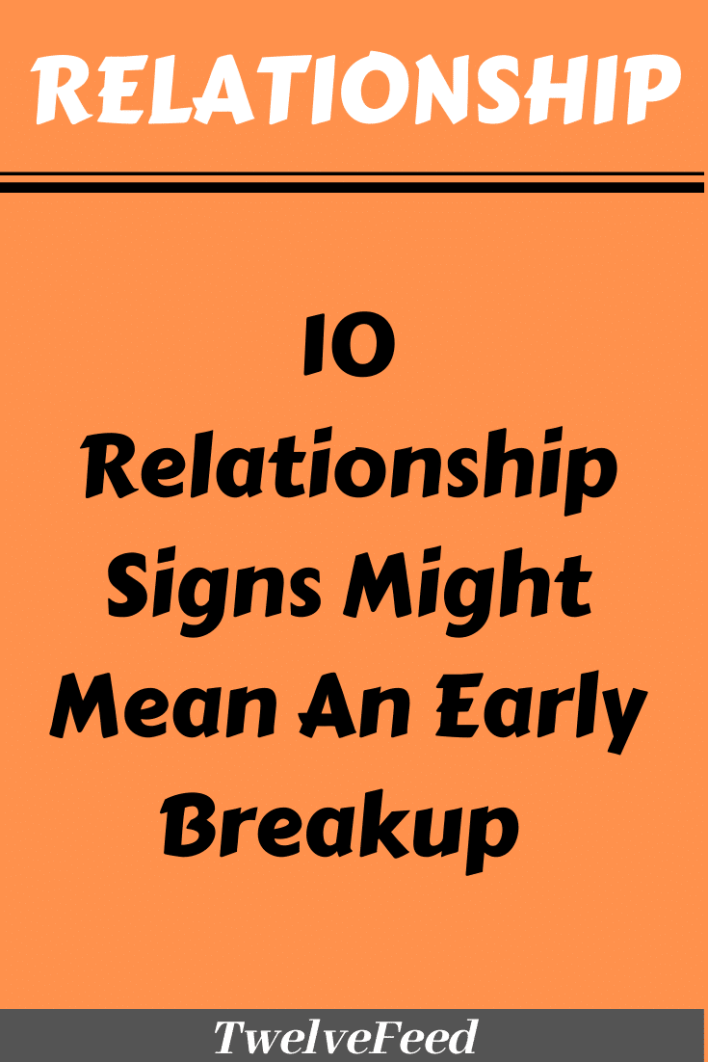 20 Surprising Things About Their Relationship