Marriage is a life sentence that takes no prisoners. These days, one can never be too sure of being together for life, and sometimes the word “forever” can mean just a few years. Sadly, many marriages never last, and some were doomed from the start.

So often, many couples are lured into marriage, and they rush into something they are never really prepared for. But then again, who really is prepared for marriage? A long and lasting marriage goes beyond an extravagant wedding ceremony. From what I have gathered, marriage is a long and arduous road couples have to take. And it comes as no surprise that many people have grown terrified of marriage and would never go down that road.

The long and winding road

Marriage has been overly romanticized in all forms of culture. We can’t help but swoon when we see those romantic proposals being shared all over social media. We can’t help but cry during the wedding ceremonies, especially when the couple exchanges their vows, promising to love and cherish each other until the end of time.

These days, marriage, like love, is a very fragile thing. Holding on to something can only bring the risk of losing it forever. Perhaps this is why the world is full of cynics – love has become so fleeting. Time has taught me to constantly be wary and on guard. The world, I have learned, can be cruel and is forever deceiving.

When I was younger, my dream was to marry the man I loved. But I have learned the hard way that to make a marriage work, it takes more than love. It takes a whole lot of patience, tolerance, and hard work to keep a marriage intact… and not everyone is cut out for that kind of work.

When I was younger, I wanted to marry the man I loved. We were together for quite some time, so naturally, I thought we would last forever and eventually get married. But I have never been so sadly wrong. As we grow older, we realize that sometimes our best laid plans in our youth aren’t the best plans for us. I was thankful that my plans were torn apart at the seams. It was the only way that I could see reality as it is, not how I wanted it to be.

Myths about marriage that we shouldn’t believe

Marriage can be a beautiful thing if one lets go of the myths surrounding it. In my youthful impulsiveness, I have so foolishly believed in some of these myths. As I grew older, I learned to separate myth from fact. It can take a lot of unlearning, but it is worth it.

#1 Being a couple for a long time means that you should get married. This is perhaps the myth that was the hardest to unlearn. When you have been with someone for the longest time, you start to believe that your investment in them will result in marriage.

However, your suitability to be married should not be determined by how long you have been together. The quality of your relationship and your willingness to overcome challenges should be taken into account as well. After all, there are lots of couples out there who dated for years and years before getting married, only for their marriage to end after a short while. [Read: 13 questions to ask yourself before getting married]

#2 Marriage makes your relationship better. It becomes ridiculous to think that marriage makes life better. Marriage isn’t some sort of magic spell where your problems will disappear in the blink of an eye. Bad attitudes, arguments, bills to pay, and the gnawing worm of reality just aren’t going to fix themselves.

The honeymoon period is only going to last for so short a time, and before you know it, your partner with all the adorable quirks and idiosyncrasies turns out to be a heavy drinker. It is true that partners bring their assets into a marriage, as well as their liabilities. It is up to you to take them as they are. Remember that change comes from within and that people will only change if they allow themselves to. [Read: 12 reasons why couples drift apart over time]

Remember not to burden your spouse with so many unrealistic expectations of the person you want them to be. Marriage will not cure your loneliness or your pessimism. As with everything else in life, your marriage is what you make it. [Read: 20 reasons for divorce that couples overlook]

#4 You won’t be lonely if you’re married. Sadly, this has become an all-too-familiar myth. Too many single people have wasted away, longing for the one who would save them from being lonely. While it is true that marriage can give you a sense of companionship, it doesn’t mean it will completely eradicate loneliness.

Too many married couples have felt the pang of not being alone but feeling lonely. Many have felt the pain of a distant spouse and the harsh reality of a marriage dying before their eyes. Sadly, many of these people insist on staying because they have already invested a lot or they have kids. Remember: an unfulfilling and dying marriage is far worse than being single. [Read: Loneliness in a relationship – 4 why’s and 7 ways to fix it]

#5 Having kids brings security to the relationship. It has become quite the common misconception that having kids brings a couple closer together. Fulfilling as parenthood may be, having children can ruin relationships if one or both of you turn out to be immature or unprepared for the responsibility of parenthood. Having children can be trying on one’s patience, and seeing to it that children are raised properly requires a harmonious relationship between the couple. [Read: 11 ways to know if you’re really ready for a baby]

#6 Arguing will destroy the marriage. There is that persistent misconception that married couples who argue in the relationship are headed for disaster. What’s true is that everyone enters a marriage not really knowing what to expect. No matter how well you get along, there will be times when an argument will be inevitable.

The danger of married couples not arguing is that they tend to make emotional compromises, and this tends to erode the sense of trust between the two. Couples in healthy relationships do argue, but they never hit below the belt. They find a way to resolve conflict, and forgive each other once the conflict has been resolved. [Read: Arguments in a relationship – 23 do’s and don’ts to remember]

#7 Your spouse should be your best friend. The truth is, you don’t have to force your spouse to be your best friend in order to make a marriage work. While marriage requires a certain level of friendship, you are still free to confide in a trusted friend who isn’t involved in your marriage. Your spouse may be your partner, your friend, your lover, your confidant, and your rock. But it’s perfectly fine if you want to share a certain level of closeness with someone you trust that isn’t your spouse.

#8 Marriage makes your life complete. Once again, marriage isn’t some sort of magic spell that will make your life complete all of a sudden. This is one of the saddest misconceptions about marriage, and this idea can ruin a marriage when the expectation to feel “complete” is not met. Your spouse should not complete you, so do not weigh them down with unrealistic expectations. If anything, your spouse should support you in your quest to feel complete, but they shouldn’t be responsible for it. [Read: You-complete-me relationships and why they could be trouble]

#9 Married sex is boring. Many people fear that getting married means an end to sex altogether, or having boring sex every single day of their lives. However, it’s not marriage itself that is to blame for a boring sex life. Other factors such as being busy with work or having children can also come into play. Sex, whether married or not, requires a few tweaks from time to time to keep it exciting. [Read: 10 ways to make married sex feel like a one night stand]

#10 Being a married couple will stress you out. It will, but only if you let it. Marriage may be difficult sometimes, but it’s not always about work. There are millions of couples out there who find it so easy to enjoy being married because, from the start, they already know that despite the difficult times, they’re confident in their bond and in their ability to work through rough patches. The more you look at marriage as “work,” the more you will resent it, and the less you will be able to enjoy it.

Whatever tropes about marriage you see in movies and on TV aren’t always true. Your marriage is what you make it, and while it can certainly be difficult to handle at times, being able to stay married and happy is worth the effort. 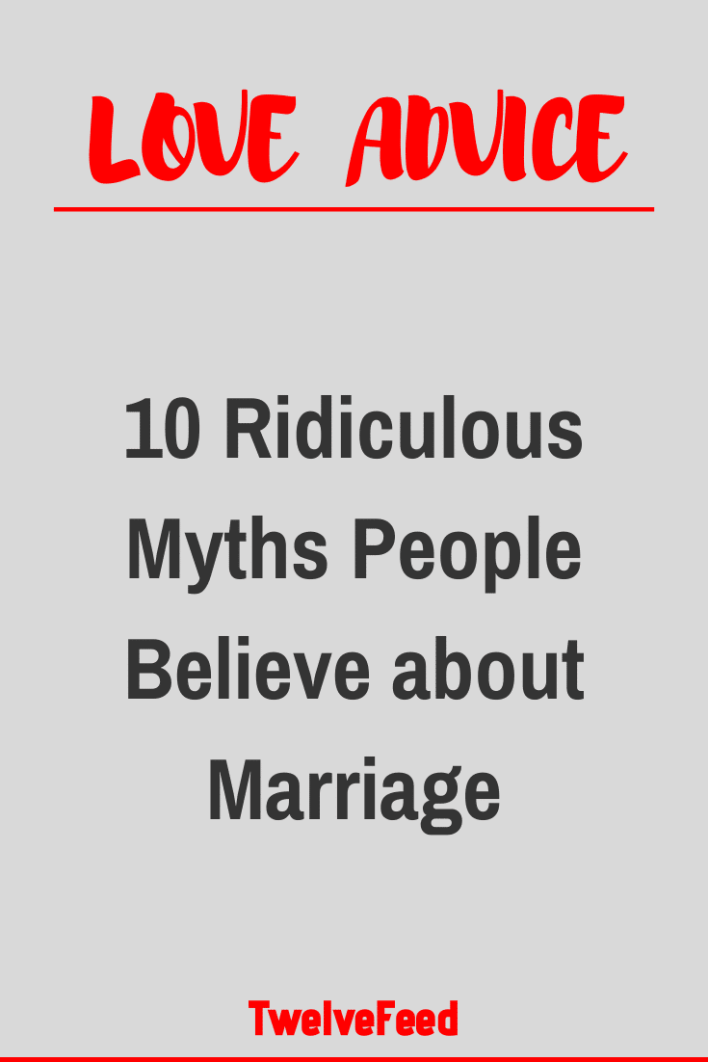 6 Breakup Rules for Exes Who Are Still Living Together