The great photographer, Rennie Ellis, once said of alcohol, “[It] has long been the prime lubricant in our social intercourse and the sacred throat-anointing fluid that accompanies the ritual of mateship.”

And how very true those words are. Alcohol has acted as a social lubricant since prehistoric times – the proverbial Dutch courage that gives us that extra step in our ability to interact confidently and competently with others. However, once that step becomes a sprint, and drunkenness ensues, then disastrous consequences may be expected. Nowhere more so than in the bedroom.

A sip too far

Alcohol relieves us of our social inhibitions, to an extent directly proportionate to the amount imbibed. What makes us interesting and erudite after a mere breath of the stuff turns us into consummate bores, lechers, and recalcitrants, if we fail to monitor our intake to the appropriate levels.

Even beginning to consider taking such booze-fueled behavior into the bedroom is a recipe practically guaranteed to lead to disaster.

Why alcohol and sex don’t mix

You may think that setting your inhibitions aside with a few drinks will lead you to a journey of eye-opening sexual exploration, but you’re more likely to tumble through a series of sexual disasters.

#1 Doing a Corleone. So-called after the first Godfather movie, where an adversary makes the mistake of getting on the wrong side of Don Corleone, and ends up with – yes, you guessed it – a horse’s head on the pillow! Whatever term you’d prefer to use, the fact is that alcohol has a frightening propensity to elevate those who’d look at home in a Boris Karloff film to supermodel status.

However, once the booze wears off and you wake up looking that gift horse squarely in the mouth, an arm trapped underneath them that you are seriously considering chewing off rather than disturbing them, you will swiftly regret those last few drinks.

And if you’re really unlucky, then one of your more sober friends will have committed the whole act of indecency to memory and plague you with the incident for the rest of your born days!

#2 Jumping the gun. You may have pulled an absolute cracker, on the other hand, with a guy or gal that is exactly the kind that you go for and is exactly the kind that you could see yourself settling down with. However, on the back of a dirty drunken soiree – and let’s face it, to go home with someone as drunk as you were, they must have been in a fairly similar state themselves – you may have just ruined any chance you had of taking it any further.

Such situations are the kind most people try to guiltily put behind them and swear never to do again. They rarely provide the basis for a long-lasting and happy relationship.

#3 Your flexible friend. Nope, not a credit card, and one definitely for the guys, describing the much-hated and feared brewer’s droop. For those not in the know, I am, of course, describing alcohol-related impotence and the effect it has on the male genitalia.

Nothing is worse than building up to the main event and having what was supposed to be a prime joint of beef replaced by what can only be described as a wet lettuce. Bye-bye, dignity!

#4 You snooze, you lose. Another much-unwanted side effect of alcohol, but altogether too common, is the drowsiness. No matter how much you are raring to go, as soon as you get into a comfortable position, the booze will taunt your body into submission, and you’ll be nodding off before you can get the condom out of your pocket.

Not something that a partner in crime wants to see when they’re ready for the deed – or even worse, in the middle of it. Try and live that one down if you can!

#5 Painting the walls. Some of us have stronger constitutions than others. Some can throw it down their necks all night long with barely a hiccup, whereas others do get quite ill on an extended drinking session. And let’s face it, few things are more likely to provide humiliation and disgust than spraying your own or your intended prey’s apartment with the multi-colored splendor of booze-laden vomit. Not really anyone’s idea of successful foreplay.

#6 Forcing the issue. This is quite a serious consideration, especially for the guys out there, but having sex with someone who is drunk, even if you’re in the same condition, can constitute statutory rape in many parts of the world. Humiliation is one thing, but a criminal record is quite something else. Best to leave out those last few drinks, and make a decision that won’t land you in quite so much trouble.

#7 Fumbling thumbs. Remember when you were a teenager and bras seemed to possess a complexity not too dissimilar to that found in quantum physics and aeronautic engineering? Well, multiply that by ten, and there you have the difficulty that removing them presents when you are intoxicated.

Throw pantyhose and tight-fitting dresses into the mix, and you may as well try and build a spacecraft than get her naked! And fumbling around her like an apprentice mechanic isn’t likely to score many brownie points.

#8 One drop or two. So you manage to find your way to one of your respective homes from which to enact the dirty deed, navigate the clothing removal situation with aplomb, successfully keep your lunch down, and are facing the prospect of actually having sex, when you think to yourself, I could really do with going to the John first. So you do. Fair enough. Better to be comfortable during the act than not.

But if this happens a second time, then a third, fourth, fifth, etc., you’re really going to spoil the mood. And, unfortunately, alcohol is a diuretic, and will have exactly this effect. So unless you have a bladder the size of a butcher’s bucket or you’ve successfully managed to squeeze a few pints out beforehand, the outlook for a fun time between the sheets is not a good one.

#9 Consider this. And you will if you’re drunk enough. Inhibitions go out the window, and you’ll consider anything. Which is not always a bad thing, but if you wake up next to last night’s pickings dressed in a leather gimp mask and holding a rather perturbed looking chicken, then you’re probably going to wish you’d stayed in and watched TV instead.

#10 Ex-sex. That person that you’ve made a career out of hating for the past six months, that dreadful individual you’ve wished all manner of evils upon for having the audacity to ditch you, the focus of all your vitriol and sorrow, is the last person you ever want to see beside you in the morning.

But alcohol is not a partisan beast, and what may seem like the worst idea in the world when sober can seem like the best idea when drunk – and if your ex turns up during the evening, then don’t expect to be going home alone. Do expect, however, to be twice as distraught in the morning when you realize what you’ve done!

So, think twice the next time you’re on a night out before deciding to take the drunken plunge. It may well turn out to be a mistake you will never forget. 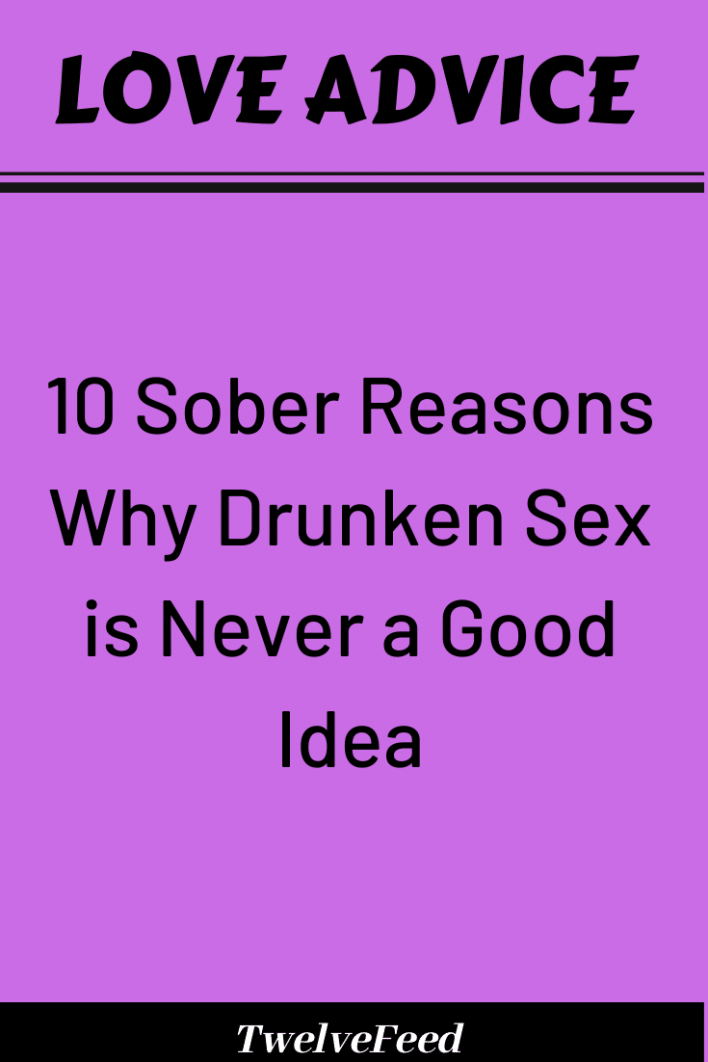