It is one of the biggest issues of the whole dating scene: knowing if someone’s into you or not, and whether the time is right to act upon it. After all, getting the timing wrong can ruin the whole thing.

Moving in too early, for instance, when the attraction has just begun, can scare them off and make them reassess their feelings for you. Leaving it too late, on the other hand, is just as likely to mess things up, leaving the person attracted to you feeling jaded and bored of waiting for you to make the first move.

Some signs of attraction then are stronger than others and need no further support to justify you instigating any romantic moves. Other signs, though, are weaker and need to be compounded by other similar signs before you should make the vital move.

How do people subtly reveal their attraction?

#1 A touching thought. Touching someone and the way that we do it is often a sign of attraction. Of course, we’re not talking about a full on bear hug or anything like that. Just the occasional touch of the arm, shoulders, or back, which are three of the more innocuous areas that people choose to focus upon when giving out this little sign.

If, however, this advances onto touches of the knee, hand, hip, or waist, then a far stronger signal is being given out, and you may want to act upon it to avoid coming across as somewhat hesitant and uncertain, especially when partnered with any of the other signs outlined below. [Read: How to subtly flirt by touching]

#2 White teeth. A flash of white teeth from a full-blooded and unashamed smile, not a snarl or grimace, is another possible sign of attraction. This does depend upon the individual, however, as there are many people out there who are natural smilers.

What you have to look out for otherwise is the duration, frequency, and depth of smile. Compare how they smile with you against how they smile with others. Are the smiles you receive a little wider, a little longer, a little more focused, and far more frequent than they are giving out to other friends, acquaintances, or colleagues? If this is the case, then you could be getting sent a message – subconscious or otherwise.

#3 A gift horse. Does the person you suspect of being attracted to you, or that you are wishing to be attracted to you, never turn up empty handed? Do they always bring a little gift in tow that only rarely seems to be extended to others? That could then be yet another subtle little sign of attraction.

And when we say gifts, we’re not talking diamond rings or a new Porsche – it could be as small and simple as a cup of coffee or a cookie. But whatever it is, don’t dismiss its potential importance as a significant indicator of them being into you.

#4 Helping hands. This one is especially relevant in the workplace and describes one of those situations, where someone seems just a little too keen to want to help you and do so just a little too frequently. You may have considered such actions to reflect the natural manner of a genuinely considerate person. But take another look – are they extending the same amount of help to others?

If they’re sprinting across the office 70s TV cop style to help you clear a paper jam whilst another member of the staff is racing around in the background trying to repair an accidentally severed thumb, then you can be pretty sure that they have their sights set on you. [Read: 9 dating moves that are awkward but cute]

#5 It is written. Written messages can say so much about how someone feels about you, whether through a phone text, email, or other forms of writing. Forgetting the content for a second, just the number of messages can tell you reams about how they feel for you, as can the time they are sent.

Receiving late evening goodnight messages from them? Then you might want to ask yourself why it is that you of all people are the last thing on their minds! The kisses at the end of a message also tell much about how that person thinks about you, and it might be worth doing a little bit of subtle scouting around to see if everyone else is getting two kisses on the end of their messages – if any at all. [Read: 10 ways to read mixed signals and turn the signs into love]

#6 The bumps. Is it the case that you previously never saw them anywhere, except for one particular social situation, but now you’re bumping into them all over the place? Have they mysteriously taken up squash at the place you go to, even though they’re about as sporty as Bill and Ted? Have they suddenly started drinking at the places you and your friends frequent, even though they are confirmedly teetotal?

It could be a coincidence, but far more likely is the possibility you’ve rather abruptly become the object of their affections.

#7 The pride and groom. It is a natural inclination, when you are attracted to someone, to want to look your best for them and step up the grooming routine. Hence, when someone within your immediate social sphere of influence changes overnight from a Pigpen to a Pitt or a Jabba to a Jolie, then you can bet that their intentions go beyond any general need to shape up – especially when it’s only ever the case in your own particular presence.

#8 Straight up! Do they suddenly and self-consciously pull their body language into self-aware order every time you approach? Maybe you approach them from a distance, across the office or bar, and observe them slumped across a seat and sprawling in a relaxed at-ease fashion, but immediately jumping to attention as soon as they see you. If so, you’ve identified another very probable sign of attraction. [Read: 18 body language signs of attraction to know if a friend is into you]

#9 Star struck. Sometimes, no matter how composed or controlled they try to be, the eyes give everything away. If that starry-eyed expression falls across their face or if you inadvertently catch them gazing at you from across the room, then chances are that Cupid’s bow has found its mark.

#10 Nice trip. Some people just go to pieces in the presence of someone they’re attracted to. They blush, sweat, get all clumsy and fall over their own feet at the merest hint of your name. You, of course, won’t be aware of this. You’ll just think that’s how they act all of the time because that’s how they always act in your presence.

The trick is, in such circumstances as these, to identify this anomaly through the behavior of other observers. If they seem bemused and surprised by the way this individual is comporting themselves, then this could be a dead giveaway of how they feel towards you.

Keep your eyes open for these top ten subtle signs of attraction, and prepare to take the next step. Whether that means making a move on them or running for the hills, only you know! 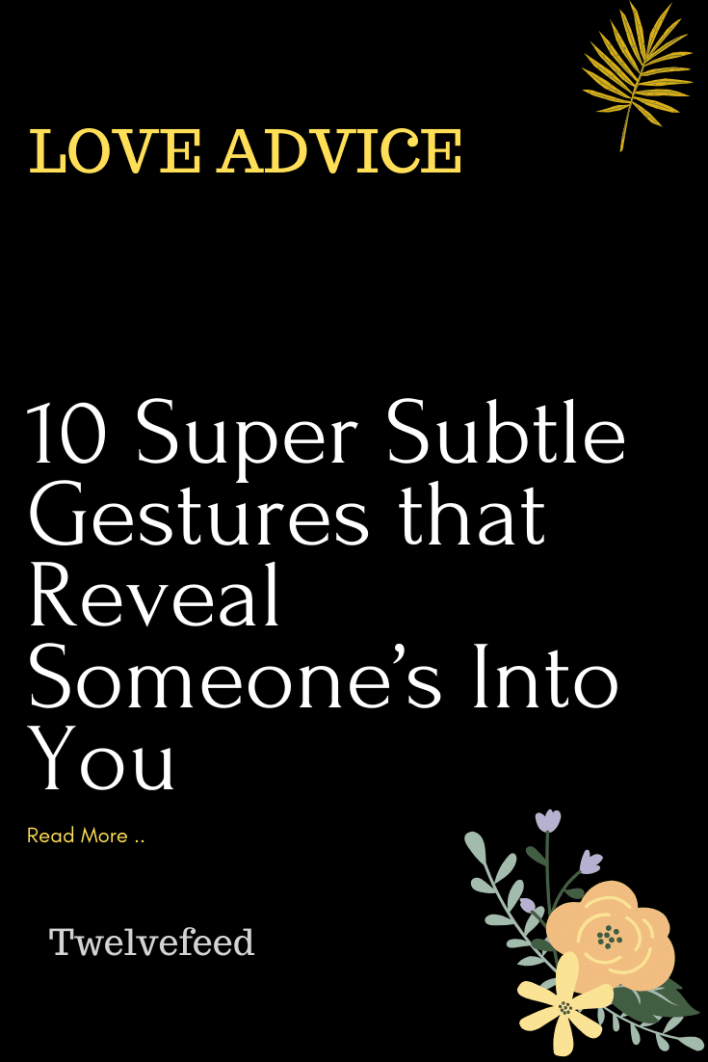 5 Big Changes when You Go from Dating to a Relationship