Whether you like shopping or you don’t, there’s no way of getting around the fact that there’s nothing funnier than seeing a hesitant boyfriend walking from shop to shop with his girlfriend as she shops until she drops.

Today, we’re going to take all stereotypes imaginable and roll them into one as we take a wild guess about what these guys and hearing when they’re in the midst of the chaos.

Of course, every type of relationship imaginable can also fall under this category – and perhaps you’re amongst the lucky few that is in a relationship where both of you enjoy a good trip to the mall. We’re jealous.

This one often makes us giggle because of the invention that is the ‘boyfriend chair’.

Long story short, it’s a chair for the fellas (or ladies) to sit down and rest their legs – because their partner is probably going to be a while.

There are a few shops that actually have designated sections like this now with plug sockets and everything. Every now and then you’ll spot a fellow boyfriend struggling through the day, and you’ll direct a subtle nod towards them. It’s a brotherhood of shopping struggles, you see.

Sometimes that’s true but sometimes, you’ve just allowed your mind to drift and think about something else. It’s important to commit to the moment and try your best to act like this is the greatest day of your life.

In another world, you’re both off on a cruise somewhere with a cocktail in hand – but for now, it’s the middle of January and the sales are on, so you’d best get your game face on and suck it up.

They say that they’re going to pop in there quickly, but after 45 minutes have gone by, it suddenly becomes clear that they were never planning on ‘popping in’ in the first place. They knew it was going to be a marathon, not a sprint.

You can go one of two ways with this: call her out because you both know it’s going to be much longer than that, or just go along with it and continue the mission statement as planned.

You’ll be back home in no time.

The immediate instinct is to say yes, let’s get every single meal from every single fast-food joint in the tri-state area.

Shopping is hungry work and it’s important to re-energize from time to time, especially if you’re rushing around trying to get the best sales before everyone else gets there. In your mind, there are probably going to be loads of opportunities to get some food, but that really isn’t the case, so seize this one with both hands.

P.S: Don’t get anything too starchy – you’re only in the first half.

The reaction is to say that she looks great because you just want to get out of there, but let’s face it, you’re going to be saying it because you mean it.

Women know what looks good on them and that moment when they do the reveal always makes the trip worth it. Of course, if it’s just a hat or a pair of socks that we’re talking about then it probably isn’t going to be quite so intense or serious, but we can still appreciate the sentiment behind it all the same.

More often than not this is just a whispered comment because you never know, the person who wants to buy it could quite literally be waiting around the very next corner.

Plenty of shops tend to take the ‘go big or go home’ approach these days, mainly to try and lure people into buying things which, realistically speaking, they don’t actually need.

4“Babe Can You Hold This, Please?”

The bags start piling up and it seems as if they’re coming out of your ears – there’s just so much going on and so much to deal with.

The lighter the bag the better, because you can start to evenly distribute the weight between both hands. Yes, it’s starting to sound like we’re putting together a playbook for going shopping, but such is the severity of the situation.

Let’s just hope that there are no heavy jackets involved, because if so, it could be a long day at the office.

3“This Is Such A Bargain”

Everyone loves a good bargain, and we all know someone – or have someone in our life – that is great at spotting a really great bargain.

Heading in when the sales are on is the best possible way to experience the benefits of this. Some would argue that specific countries are better for this than others, but we don’t really agree with that.

We think it’s more about the timing of it all and keeping your ear to the wall. Yes, we know it sounds like boot camp, and there’s a reason for that.

2“Is There Anywhere You Want To Go?”

This is a really half-hearted attempt by the girlfriend in question to float the idea of you doing some shopping, and more often than not, they’re 80% confident that the answer is going to be no.

Every now and then, though, it’s important to throw a curveball out there to keep your girl on her toes. Say you want to go into Foot Locker and proceed to spend around three hours in there, securing some of that much-needed revenge that you’ve been longing for.

Yes, we may have taken it too far.

They’ve been in there for an hour and they claim that they’re going to be out within a matter of minutes.

Somehow, someway, we don’t believe this to be real.

You’re lured into a false sense of security by thinking that there’s light at the end of the tunnel. Sometimes, that’s the case, but on occasion, it’s all a load of waffle and you need to come to terms with the fact that you’re going to be sticking around until closing. 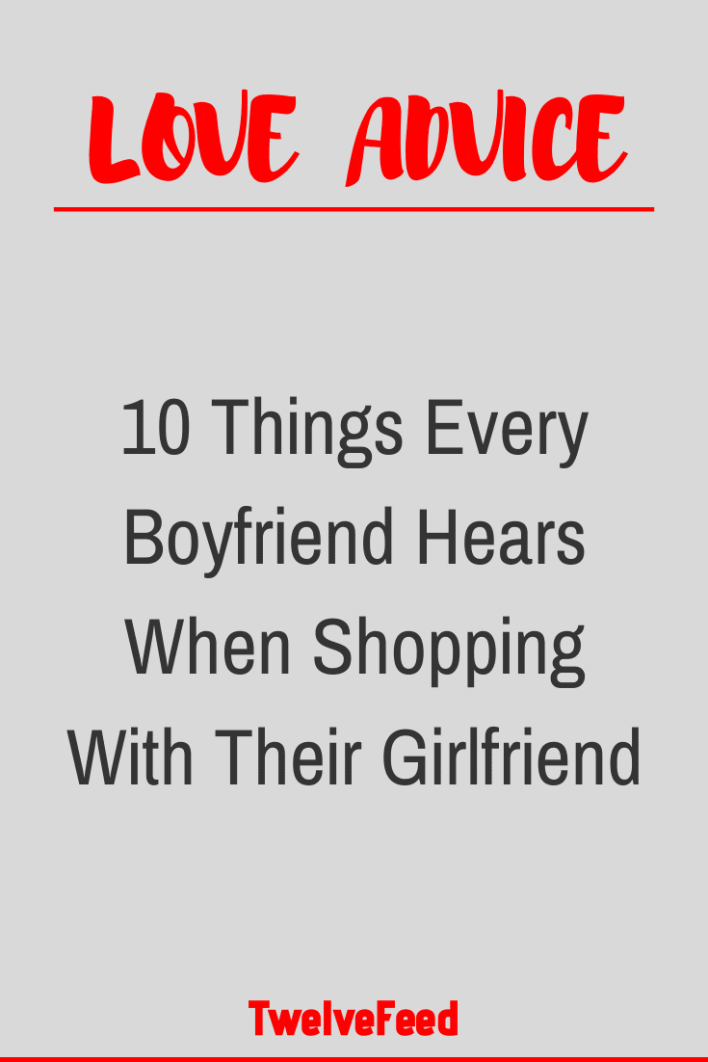