When you’re in a relationship, there will be times when your boyfriend says something that makes you upset, angry, or just flat-out confused. And the funny part is, half the time, they really don’t mean anything by it at all!

Men have a way with words that may or may not leave a lot to be desired at times, but really, it all boils down to the fact that women and men speak on two different wavelengths. Instead of painstakingly trying to analyze every single thing your guy says and coming up with your own biased interpretation, we’re here with a guide to help you understand what he really means.

How to understand what you man is saying

Here are some of the most common things men say that often leave women wondering.

#1 “We can if you want.” Whatever it is you’re talking about, it’s not that he doesn’t want to, but instead, he’s thinking through his plans, work schedule, general feelings at the time, and whatever else is on his mind. For instance, if you ask him if he wants to go for a walk with you and he replies with this, don’t assume he doesn’t want to or that he isn’t feeling it.

He could be gauging whether he’s got the energy to do it, or whether there’s something else he’d rather do with you. He could even be thinking of other things to add to the walk, like a purpose. Maybe he wants to walk to a destination rather than just walking for fitness’ sake.

#2 Anything resembling poking fun at you. It’s a joke, don’t take it to heart. Remember kindergarten when that little boy with the massive crush on you loved picking on you and making you cry? Well ladies, men don’t change when it comes to that. They do it as a sign of affection, a way to laugh and, yes, invite you to poke some fun back at them. [Read: 16 reasons your boyfriend is being so mean]

#3 “Just chilling,” or “just relaxing,” or “nothing,” when you ask him what he’s doing when you’re not around. This means exactly what he says it means: nothing. In girl world, detail reins, even if it means telling him about the reality TV show you’re binge-watching on Netflix. In guy world, if he’s watching TV, then he isn’t really “doing anything.”

#4 “I just want some alone time.” No, he isn’t bored of you, and no, you didn’t do anything wrong. You didn’t overstay your welcome, and you didn’t upset him. He simply wants a day to himself to do basically nothing important.

He may want to sleep in, watch TV, play a game, or just go for a coffee run and get some work done. He still loves you and wants you around. But everyone needs their own space every now and then. That’s it, nothing remotely close to a breakup. [Read: 10 hints he’ll give if he just wants some space]

#5 “I don’t know.” The answer you get when you ask either a mundane question or a very important question, but either way, it can be frustrating. When he says this, he either doesn’t know how to answer *as in he’s thinking of the right words*, or he genuinely has no idea.

“I don’t know” doesn’t necessarily have to mean, “I don’t care.” There are just some things that men genuinely don’t have an opinion about because these things never really affect them, like what haircut you should have or where you should do your groceries. It’s best to give him some more details or some time to formulate an answer.

#6 “Not really.” This is the most annoying answer of all time because it means “no,” but they add the “really,” and throw you off. They make it seem like there’s more to the story at hand, and there very well could be, but it’s not always the case. Sometimes, they really just mean “no,” but “no” is such a blunt answer, so they soften it up by saying “not really” instead. [Read: Is your boyfriend getting lazy and boring?]

#7 “Let’s stay in.” Again, he isn’t bored, and no, he doesn’t want to be left alone, otherwise he’d say so. All this means is that he wants to stop going out for the day, and take a breather with you. He wants a day in, where you both cuddle, eat, lounge around, and do mundane things. This is especially important if you’re a very socially active couple, and don’t seem to get enough alone time.

#8 “I want to do this myself.” He wants your input, ladies, but he wants to take the wheel and make you the copilot on this one. This can be a good thing, depending on the issue, but remember, you both need to wear the pants in a relationship.

Let him take the lead on this one, and if he needs help, he’ll let you know. Perhaps reluctantly, but he will, and you can bask in self-righteousness behind his back. More so, you should be proud that he wants that sense of independence and do something on his own that he has clearly made into a personal mission. [Read: 14 things you say or do that emasculates your man]

Sure, depending on the guy, it might be any of those things, but ultimately, not every guy is doing something sketchy on the side. Most of the time, the best explanation is the simplest one. [Read: 30 facts about guys to help you read his mind]

#10 “Come spoon/snuggle/hug me.” He’s not looking to have sex, not at the moment anyway. He may very well want to later, but right now, all he wants is to hold you and cuddle up nice and warm together. Cuddling can lead to sex, but cuddling is also sacred and can stand perfectly well on its own. Don’t believe the myth that men hate cuddling, because truth is, most men actually love spooning.

As you can see, most of the time, men are harmlessly failing at getting their point across, or genuinely speak of nothing that merits paranoia. Instead of questioning your man next time, remember that what he says can actually be what he means. 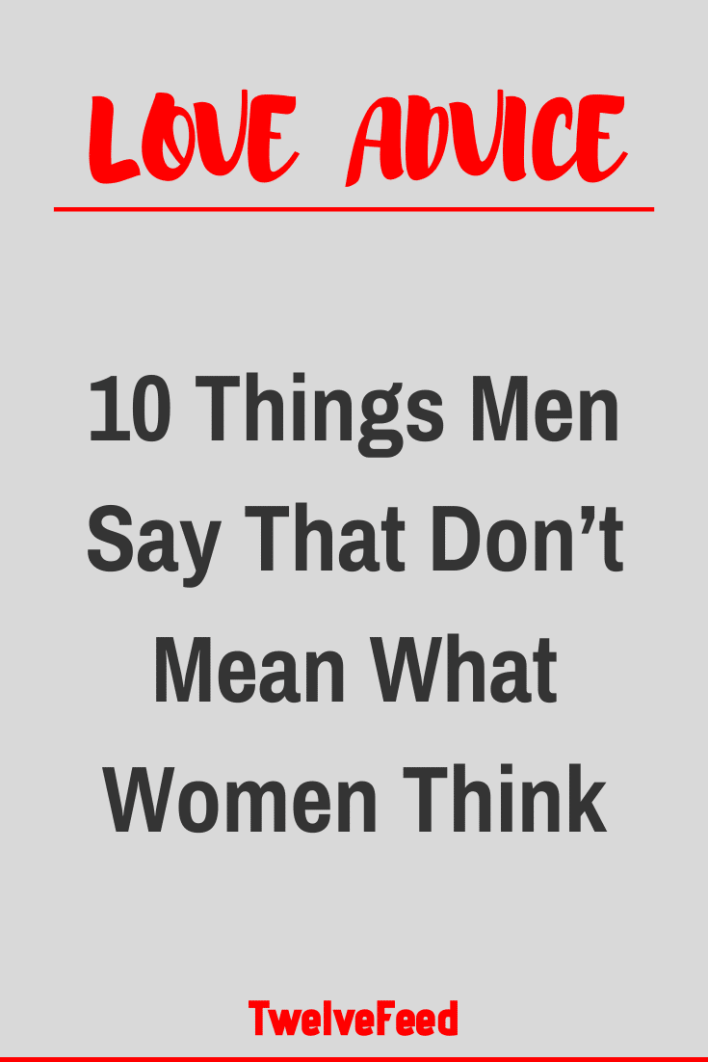 6 Breakup Rules for Exes Who Are Still Living Together

2023 Love Horoscope: How To Win The Heart , Knowing, According To His Zodiac Sign
10 hours ago

2022 Horoscope: December Relationships, Finances, And Health, Based On Your Zodiac Signs
10 hours ago

2023 Horoscope: Why have been looking at your Zodiac Sign incorrectly all this time and what do the deans have to do with it? Based On Zodiac Sign
10 hours ago