Looking back on a previous or even a current relationship, there are a few moments that make you cringe, perhaps something you learned the hard way not to do anymore, or even something that you did in a moment of weakness. Whatever it is, big or small, it hopefully led to a lesson learned.

What makes the situation better is that you’re not alone. Whatever mistake you’ve done, chances are, someone out there has done it too. It doesn’t mean it’s okay, but it does offer some consolation. For those of you who may be inexperienced, or even those who want to look back and reflect, this little list is for you.

What do people do in relationships that they end up regretting?

It’ll take more than just a simple apology to get through some of these regret-inducing scenarios.

#1 Lying and concealing the truth. Not only does this lead to arguments, sadness, and general feelings of misery, it also breaks trust. Trust is one of the hardest things to earn back after you’ve lost it, but it is possible. However, do you really want to spend months or years earning it back? Lying to your partner simply never ends well. [Read: How to stop lying to yourself and to your partner]

#2 Not managing your anger well. This can lead to arguments, yes, but in the heat of the moment, you might also end up saying things you can never take back. Not only does that open the door to abusive behavior, but it can also lead to simmering feelings of resentment that can bubble over into an outright breakup. [Read: 10 ways to handle someone with anger issues]

#3 Cheating. Not only are you violating your commitment to each other, you’re also saying your partner isn’t good enough or isn’t giving you what you need from a relationship. It’s a nonverbal attack on your partner, and it’s a hurtful one to recover from even if you get a second chance.

#4 Abuse. This could mean physical, emotional, or mental abuse. While not everyone is guilty of physical abuse, many people don’t realize that mental and emotional abuse are also easy to commit.

Neglecting your partner’s emotional wants and needs is a form of emotional abuse. Berating your partner and always bringing up their shortcomings is an example of mental abuse. These things may not seem that big a deal at first, but just imagine what it would be like to feel neglected and criticized on a day to day basis.

#5 Taking your partner for granted. It’s unfortunate how common this is. When someone puts their heart and soul into their relationship, oftentimes, the other person may feel like they can take the backseat and fall asleep. It’s not auto-pilot, it’s not a road trip, this is a relationship. If one person does everything, but the other barely does anything or barely acknowledges the effort their partner is putting in, resentment occurs. [Read: 16 discreet signs you may already be taken for granted]

#6 Attributing unhappiness to your relationship. This only applies to situations wherein you blame your relationship for your unhappiness without being honest with yourself about other aspects of your life. Everyone has had a time in their life where they feel lost. Problems at work, arguments at home, and lacking a sense of direction are examples of situations where one can feel almost helpless.

It’s during these times that your relationship seems to be strained. Many people make the mistake of attributing their unhappiness to their relationship, and they end up breaking up. And later on, when they realize they were actually happy and stable in their relationship, they regret their actions. Every time you find yourself in this predicament, take the time to see what external factors are bringing you down. [Read: 12 real reasons why couples drift apart over time]

#7 Nitpicking. Why are you wearing that? Why do you always make that face? Why did you clean up and make the bed touch that wall 3 inches too much? Why are the papers not in an exact, neat pile? After a while, the person hearing this daily, constantly, or at least multiple times a day can start to get resentful. You know what motivates people? Telling them how good they are at something.

#8 Imposing high standards. This could mean that when you interact with your partner, you focus too much on your own expectations of what they should and shouldn’t be doing. When they fail to measure up to your perception of who and what they are, you feel let down. Everyone is different, and a certain level of acceptance is required in a relationship. If your partner really does bother you with who they are as a person and what they do, then they’re not the right one for you. [Read: 8 ways to be less critical of the people around you]

A relationship isn’t a part-time job. It requires time, sacrifice, and effort. It doesn’t mean you should make your relationship your entire life, it simply means you need to balance all the other aspects of your life. [Read: 16 silly bad habits that can hurt your relationship]

It takes trust to be supportive of each other. Trust that your partner is doing the right thing. Trust their ability to make good decisions. If you don’t and they end up being successful in their endeavor, you’ll definitely regret not cheering your partner on.

[Read: 5 life-altering lessons you can learn from regret]

Regretting something is a sign that you did something wrong and that you shouldn’t do it again. Regret weighs you down and keeps you from moving forward. But instead of wallowing in the things you wish you didn’t do, take it as a lesson to never do these regrettable relationship actions the future. 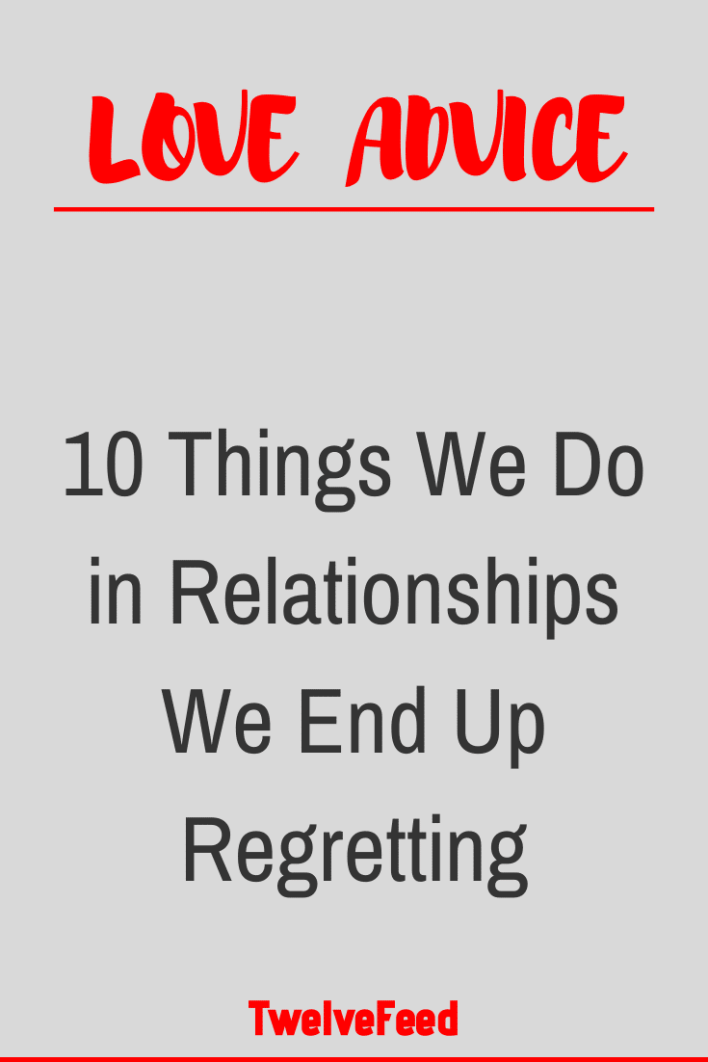 What to Do When the One that Got Away Comes Back

How to Find Your Fictional Character Crush In Real Life