Okay, having a crush can be quite awful. You’ve been there, we’ve been there, the entire world has been there. There’s that one person we just can’t stop thinking about, and we keep thinking about ways to spend time with them, trying on new clothes to get their attention, trying to figure out if there’s even the slightest chance they’d be interested.

RELATED: Which Netflix Movie To Watch With Your Crush, Based On Their Zodiac Sign

It can get quite hard at times, and that’s no secret to anyone. However, it’s not at all impossible to get that special someone (yes, you know exactly who) to finally open their eyes and see that they might actually like us back. Of course, honesty is always the best policy, but before letting them know you turn into the heart eyes emoji every time they’re around, there’s a couple of steps to take.

It’s one thing to talk about your past relationships when you’ve been dating for some time. It’s a completely different thing to go around and freely complain about your ex to the person you’re hoping to date in the very near future! Not a problem if you mention it in passing, but let it stop there.

Besides, it’s always a red flag when someone is constantly insulting their ex. Maybe they really were a terrible person but, more often than not, it leads people to think you’re the crazy one who still isn’t over them. This is a huge nope!

Still on the topic of past relationships, just as you should leave your past where it belongs, you should do exactly the same with your crush’s. You probably don’t know enough about their ex in the first place, so what gives you the right to talk about them?

There’s no point in bringing up their ex: it will do absolutely nothing for you, especially if you insult them. It makes you look insecure, and if things ended on a good note between them, your crush will take it the wrong way if you talk bad about them. Stay in your lane and focus on you and what you can do for them. No comparisons!

8What Are Your Thoughts On Marriage?

You need to take it easy. You two aren’t even a couple yet—if you start talking to them about marriage and babies, they’ll think you’re just way too intense. Just think about it from their perspective: if someone came up to you and asked you the same question, wouldn’t you feel slightly freaked out?

There are so many other interesting topics of conversation you can come up with to win the interest of your crush and to make them actually like you! Why blow it all up by being so incredibly intense right off the bat? Be patient—the time will come.

7You Looked Great In That Picture! (From Years Ago)

Raise your hand if you’ve never, not once, stalked your crush on at least one social media platform, going back all the way to 2014! No one? Yup, that sounds about right. It’s obvious you’re only human, and when infatuation hits, you can’t stop yourself from going through their profiles and looking at all the photos you possibly can.

You’re not alone—it’s safe to say 90% of people do the exact same thing. Just keep it to yourself, okay? It’s one of those unspoken things that, if someone actually accidentally blurted out, would end up sounding way too weird. A bit of a red flag, if you will. Just stick to compliments about what they look like at the moment, and you should be fine.

In the wise words of Mama Ru, “If you can’t love yourself, how in the hell can you love somebody else?” Self-esteem and self-love are hard to come by, and they’re a very real struggle for people everywhere. It’s impossible to be 100% happy with yourself every minute of every day, and that’s facts.

However, that being said, it doesn’t mean you shouldn’t try to love yourself. Confident people are much more attractive than those who constantly put themselves down. Saying something along these lines just screams insecure, and anyone who would like to hear something like that simply isn’t worth your time. You’re better than that!

5My Parents Would Love To Meet You!

Again, take it way, way, way down. Meeting the parents is quite a big step, and a beautiful bonding moment in general…when you’re dating. Just like the marriage thing, bringing up how much your parents would love to meet your crush is weird and a little nonsensical.

Remember, this is someone you like and can potentially see yourself in a relationship with. The goal here is to spend more time together and eventually see if things could actually work out. Saying something like this can very well be the last nail in the coffin of your potential love story, so don’t do it.

4Why Didn’t You Reply To Any Of My Texts?

Nobody likes to be controlled. It’s not cute in a relationship, it’s not cute in a friendship, and it’s certainly not cute when you’re getting to know someone. You probably already know this—what was your reaction the last time someone texted you ten times straight while you were just chilling with your friends away from your phone?

It’s a major red flag if you come off this intense. We get: you like them, and you want to talk to them. But they have a life outside of you, and they don’t owe you anything, just like you don’t, especially if you’re not even an item. Keep it together—if they didn’t answer, they were probably busy. If it’s a pattern, then they’re not interested and it’s time for you to move on.

3I’m So Sick Of Being Single!

Desperation is probably one of the absolute worst vibes you can send out into the universe and, obviously, to your crush. It’s important that you know yourself as an individual who is able to fully function and be happy outside of a relationship. At the end of the day, this actually makes you better at being in one.

RELATED: What Their Dating Dealbreaker Reveals About Them

Saying things like “oh my god, I hate being single” or “I’m so tired of being alone” are not cool. It’s okay if you feel it, we all do sometimes. Just make sure you don’t vent to the person you’re trying to win over because that’s the sort of thing that can kill any potential interest in a matter of seconds.

Unless you and your crush just so happen to be best friends who’ve known each other for ages (which is actually adorable, congratulations), this is a huge no. You can put this one in the same bag with the marriage and the parents, but several levels above when it comes to the intense vibe.

It might’ve worked for Ted Mosby eventually, but real life isn’t a TV show. It doesn’t matter how much you like your crush—you don’t tell them you love them out of the blue. Plus, what you’re feeling is probably closer to infatuation than actual love. There’s a very real possibility it will evolve to that point—but it ain’t happening if you drop the L word before you’ve even been on a date!

We’re going full circle here—yes, having a crush is hard. It can even feel incapacitating at times! We all know that feeling when we see the target of our affections and our tongue all of sudden feels like it’s been tied in a weird way that doesn’t allow us to speak, and we’re so nervous our stomach twists.

But here’s the thing: no matter how bad all of the other things are, nothing is worse than not talking to your crush at all. You’ll only know your chances if you dare to take a risk. Otherwise, you’ll just walk around feeling miserable forever and wondering “what if.” They might be into you, they might not care at all—but the point is, you’ll never know if you don’t at least try! 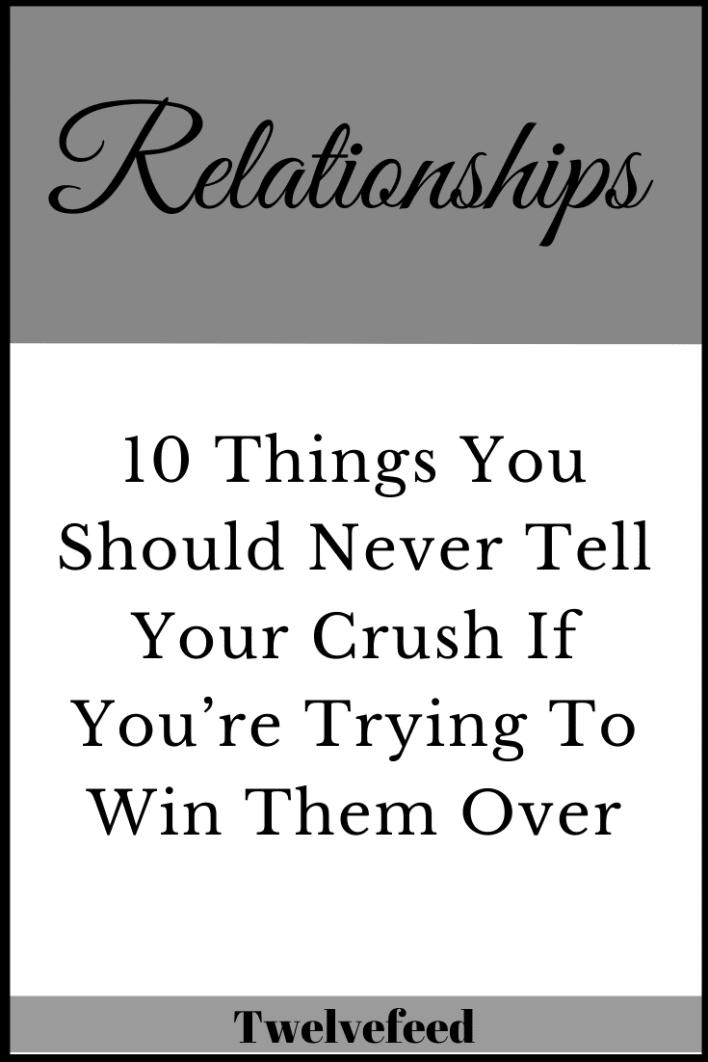 10 Signs You’re About To Enter The Friend Zone

ILY: The Ways He'll Say It (Without Saying It), Based On His Zodiac Sign