Chrissy Teigen and John Legend are one of the most beloved celebrity couples of all time because of how authentic, romantic, and earnest they are together. It is clear to millions of fans that these two are in it for the long haul and that they work to lift each other up every day. Chrissy and John prove that relationships don’t always have to be difficult. Sometimes they can simply be effortless and filled with excitement, laughter, and praise. Every couple deals with its share of challenges but for the most part, a relationship should be filled with joy and affection, which is exactly what Teigen and Legend share together.

So without further ado, let’s take a look at this lovely couple’s most adorable moments that basically invented “relationship goals”.

RELATED:20 Reasons Why Chrissy Teigen Is The Best Wife In Hollywood

In 2018, John Legend gave a lovely speech to millions about his beautiful wife for Glamour’s Women of the Year Awards. He talked about how worthy Teigen was to receive the honorable award, despite her imposter syndrome. In fact, he thought she was so worthy and inspiring that he struggled to hold back tears during his speech. This inspires all of us to find a man who isn’t afraid to get emotional about his love for you and who will never stop giving you remarkable compliments. Why would he ever want to stop?

It is clear that the two always strive to make each other feel worthy and loveable which makes for the perfect team.

Chrissy and John first met way back in 2007, when the model co-starred in Legend’s music video for “Stereo”. They spent all day shooting the video together and both didn’t want to split ways just yet once the final cut was called. So instead, after a day of steamy filming, they decided to order In-N-Out Burger together and hook up. They kept things casual for several months before the couple officially started dating and they haven’t looked back since.

Chrissy has stated in an Oprah interview how romantic John has always been when it comes to their dating life. Before marriage, they’d go on bike rides together and enjoy glasses of wine on beautiful rooftops. They’d spend time on boats in Italy together. There were so many romantic moments that Chrissy kept assuming John would propose during one of those lovely dates because of how extravagant they turned out to be.  It’s always a good sign when you find a man who loves to sweep you off of your feet, so never settle for someone who doesn’t make you feel loved and appreciated.

8ALL THE LAUGHTER SHARED BETWEEN THEM

As we can tell from social media, Chrissy and John are constantly goofing around while sharing lots of laughter with one another. Teigen has stated before how John thinks she is the funniest person in the world, and that’s probably the most romantic thing we’ve ever heard. We are used to hearing how a man thinks his lady is the prettiest woman on earth or the most gorgeous, but the funniest? Now that’s a keeper! Any man who allows you to be your most hilarious and goofy self while loving every bit of it is total marriage material. If he can’t appreciate your sense of humor, he might not be the one for you. After all, laughter is one of the main keys to maintaining a successful and lasting relationship.

7THE MUSIC HE WRITES FOR HER

Every girl fantasizes about a man writing a song specifically for her, and no man manages to ace this task quite like John Legend. He says all the right words in his songs and you can tell how much he loves Chrissy by the passion in his voice.

He doesn’t sexualize her like we are used to hearing in pop songs, he tells the story of his true affection for the woman he has fallen deeply in love with. “All of Me” is one of the most lovely pop songs of all time because it is so authentic and soulful all at once. It describes a relationship that is built off of mutual devotion and trust. That is the kind of relationship everyone should strive for.

6WHEN THEY LIFT EACH OTHER UP

Whether it’s in interviews, on social media, or in his music, both Chrissy and John are constantly complimenting each other. The best way to keep the passion alive and strong in a relationship is to make sure you and your partner are constantly lifting each other up rather than tearing each other down. Too many people in relationships develop a habit of becoming extremely critical towards one another, which is a surefire way to destroy the love and trust between two people. Why would anyone want to be around someone who makes them feel worse about themselves? We crave to be with people who make us feel wonderful and amazing, it’s really that simple. If your partner makes you feel this way and vice versa, that’s all you need to make it last.

RELATED: Chrissy Teigen Never Changed Her Name But John Kind Of Did

Chrissy and John are the perfect examples of two people who love to make each other feel beautiful and capable in every way.

Chrissy Teigen is one of the funniest people on social media, so it’s no surprise that she posts some hilarious moments about the day to day life of her and John. Although they are constantly praising each other, Chrissy still knows how to keep things down to earth and authentic by trolling Legend pretty frequently on Twitter. Couples who can take a joke are the surest to last. Not taking life too seriously yet still offering time to get all gooey and romantic is the perfect recipe for a lasting relationship. Chrissy and John teach us that there is room for laughter and romance. They don’t have to be mutually exclusive.

Speaking of romance, there is nothing more romantic than Chrissy and John’s ‘love spot’ aka Lake Como, Italy. All the way back in 2007, John and Chrissy first went on vacation to Lake Como when they just began dating. The two went on a boat ride together and they were told to make a wish by the tour guide. Chrissy wished for John to be the man she would end up marrying and having children with.

Lake Como is also the place where they filmed the music video for “All of Me” which features clips from their actual wedding (that, of course, took place in their love spot). They continue to visit LC as much as possible with their family and post about it on social media so fans can experience all the love with them. How beautiful!

After The Grammys, most superstars and musicians love to go out and party at the most extravagant clubs. Not Chrissy and John! Well, at least from what we could tell on social media. While most celebs probably celebrated Post-Grammys night by dancing on top of expensive tables until the sunlight, John and Chrissy spent the night on the kitchen floor taking Snapchat videos and making ramen noodles. If you’re in an amazing relationship, who needs to party hard when you can just enjoy a cup of noodles with your hubby on the kitchen floor? It’s the best kind of way to end the night!

We all remember that classic moment of Chrissy Teigen crying that got made into one of the most popular memes of all time. Of course, these were tears of joy that sprung from how proud she was of her husband. Chrissy is not the only one who gets emotional over her partner’s accomplishments. As stated previously, Legend teared up as well during her acceptance for the Women of the Year award. Both share a true desire for their partner to succeed and thrive.

1WHEN HE STOOD UP FOR HER

The internet is famous for shaming celebrities, especially female celebrities. Often when a female celebrity becomes a parent, they will experience a ton of shame for the way they go about their parenting. Something as simple as a mother going out for a nice dinner without their kid will automatically cause people to stir up rumors claiming she neglects her kid. Legend stood up for Teagen in a tweet that went viral, when he said, “Funny there’s no dad-shaming. When both of us go out to dinner, shame both of us so Chrissy doesn’t have to take it all. We’ll split it.” 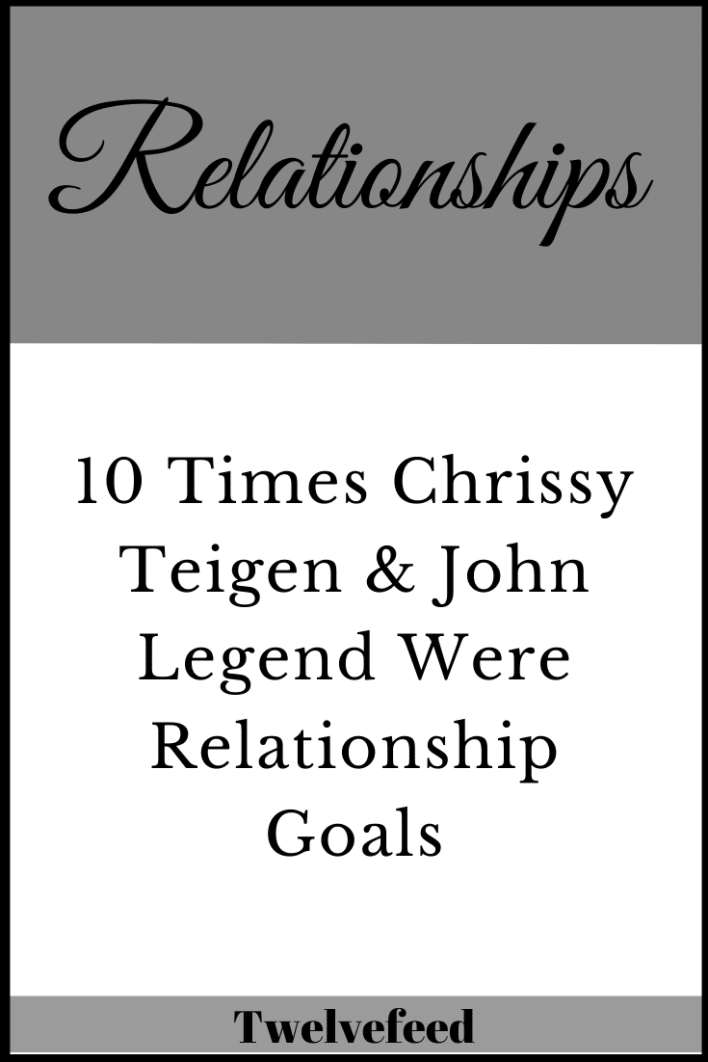 10 Subtle Red Flags That Suggest A Guy's Stringing Her Along