Are you in an unhealthy relationship right now: the kind that’s full of fights, misunderstandings, and even violence? If you’ve gone through trial and error to fix it but still end up being frustrated and emotionally exhausted, then maybe it’s time for you to get out of that unhappy and unhealthy relationship.

If you don’t know how and where to start, here are some ways for you to be finally free from that toxic relationship:

1. Beat the denial game.
Sometimes, even if you know for yourself that the relationship is unhealthy, you refuse to admit it because you don’t want to lose the person you love. You may be so used to being with him or her for such a long time that it feels “convenient”, and you don’t want to go out from your comfort zone. However, you can never find your way out of that destructive relationship if you don’t admit you’re in it. Wake up. Stop denying you’re doing just fine even if you’re not. Have the courage to admit that you’re no longer happy being in that kind of relationship.

2. Re-evaluate your worth.
Just because you’ve been together for seven, eight, or ten years doesn’t mean that you will still stay with your boyfriend or girlfriend for the sake of staying with him or her. If the relationship is too unhealthy that it’s far from saving, then remind yourself that you deserve better. Know your worth. You deserve to be happy; you deserve the kind of love that’s giving and will make you love yourself even more, not the one that will make you lose yourself.

3. Recognize the perks.
One way to help you finally get out of an unhealthy relationship is to recognize the perks. Think of the good things that will happen if you break up with him or her. Did you lose contact with some of your friends because your boyfriend or girlfriend is too strict and controlling? Then, you will have the time to reconnect and make up to your friends. You will have the chance to meet new people. You will no longer have to call him or her up every now and then. You will see the world in a totally different way, and you will love your independence.

4. Remember who you used to be.
To help you realize the need to let the person go, think of who you were before your relationship with him or her started. Have you changed a lot? Were there things that you’re no longer able to do because he or she didn’t want to see you doing them? Think of the things that you enjoyed doing before. If you don’t seem to know yourself now and you’re too emotionally and mentally drained, you have more than enough reason to end that relationship.

5. Plan ahead.
When are you going to tell him or her? Did your boyfriend or girlfriend just celebrate his or her birthday? You might want to do it after. In reality, there’s no perfect time when it comes to breaking up with your boyfriend or girlfriend, but it’s your call. Choose the right medium as well as the place where you’re going to meet him or her. Even try to think of the things that you will say and how you will break the news to him or her. Planning ahead may help you end the relationship the reasonable way.

6. Ask for advice.
You may be tired, confused, and suffering in pain right now, but you don’t have to suffer alone. There are a lot of people willing to listen to you and be there for you. Reach out to your family and friends. Tell them about your plan to get out from that unhealthy relationship, but you need not speak ill of your boyfriend or girlfriend. Just share what you feel, and ask for their advice. Include these pieces of advice in your plan.

8. Talk in person.
Since you’ve decided to end the relationship, it’s time to face the reality. It’s time to end it. Just end it. It’s not going to be easy, but stand for what you think is the right thing to do.You need to tell him or her that it’s over, and it’s important to do it in person because it creates a more genuine atmosphere. You get to witness each other’s facial expressions, gestures, tone, and even the smallest details in the interaction. Sometimes, when you’re in a long distance relationship, it’s hard to do this, and you might end up breaking up with the person over the phone. However, as much as possible, talk in person. Doing so will give both of you a bigger chance for a proper closure.

9. Be firm!
Once, you’ve told him or her that you’re ending the relationship, there’s no turning back. Don’t falter. Be firm. You might just give in when you see him or her begging. Once that happens, it’s just going to be a cycle, and it will be harder for you to get out. Yes, it’s going to be a long road, but you will soon realize it’s best for both of you. You are actually doing yourself and your “boyfriend” or “girlfriend a favor by ending the relationship.

10. Try new things.
Just because you’re about to part ways with your boyfriend or girlfriend doesn’t mean it’s the end of the world. Travel alone. Go on a hike. Try a new hobby. By doing new things, you will get to discover more about yourself, and you will learn to love yourself more this time.

Yes, getting out of an unhealthy relationship is easier said than done. In the end, the decision is still up to you. However, as a piece of advice, don’t let yourself be trapped in this kind of relationship. You’ll be missing out on a lot of things. You might just miss out on life. 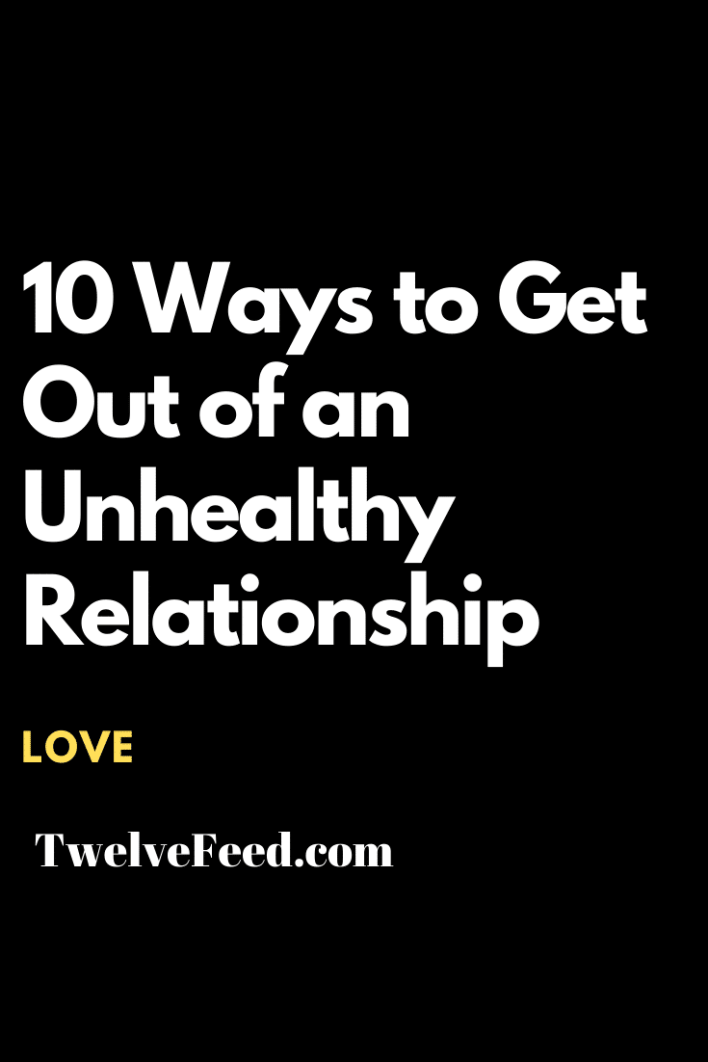 10 Ways to Be More Romantic to Your Girlfriend