Of course, if you know how to bat your eyelids or smile just the right way, you’d be able to get his attention in no time.

But while a first impression would get him to notice you, it still takes a few conversations and dates to get him to fall head over heels in love with you.

The little things that turn men off in a big way

Have you ever experienced a time where you got a guy’s attention, but he didn’t respond well to you after the first date?

Or have you met a guy who seemed completely smitten by you, and all of a sudden, he starts losing interest in you or avoids you after a few conversations?

In all probability, you may be doing a few things that are driving the men who like you away from you.

[Read: 12 stereotypes of girls in a guy’s mind and where he may be placing you]

But it takes a while for them to fall in love with you.

And if you turn them off with your behavior within the first few dates, most guys would start distancing themselves from you, or start treating you like their friend in no time. [Read: How men fall in love – The 7 stages of love for men]

If you’re on a date with a guy, or having a conversation at a cafeteria with a crush of yours, just keep these 11 dating turn offs for guys in mind.

You may not realize it, but you may be indulging in these turn offs without even realizing it yourself!

#1 Narcissism. Being proud of who you are, your achievements and your appearance is always a good thing. But there’s a thin line between a girl who knows how good she is and a vain peacock. [Read: 25 things guys find sexy and irresistible about a girl]

Do you unknowingly constantly talk only about yourself even if the guy tries to say something about his own life? Or do you constantly compare anything a guy brags about to something you’re experiencing yourself? You may think you’re connecting better with him by appearing like a know it all, but your ability to turn anything a guy says into your personal story could come off as arrogance instead of a charming ‘me too’ story!

#2 Controlling or dominating personality. Do you try to control everything a guy does when he’s around you? If he’s holding his chopsticks in a way you don’t approve of, do you feel the impulsive need to correct him? If it’s an occasional thing you do, that’s completely acceptable.

But if you find yourself constantly controlling or dominating a guy over everything he does or says when he’s with you, be it about his grammar, the places to go to, or your idea of what a good vacation spot is, he’s going to feel deflated and angry very soon. [Read: 20 glaring signs you have a control freak in you!]

#3 Yes or no answers. Are you the kind of shy girl who doesn’t converse and prefer to sit quietly during a date? A guy may be smitten enough by you to overlook this trait of yours initially. But if you just answer every question of his with monosyllables, or avoid asking him any questions back in return, it’s definitely a dating turn off that’ll annoy him or make him assume you’re not interested in getting to know him better. [Read: How to use your shy attitude to your advantage and get any guy]

#4 Poor social etiquette. This is more than just a turn off, poor social etiquette or bad manners can make a guy feel disappointed and upset by your behavior. Do you take ages to text a guy back to confirm about a date? Or do you excuse yourself to talk to someone you bumped into during your date, and leave the guy alone at the table for several minutes?

Poor social etiquette consists of so many things, like cutting a guy off in mid sentence when he’s saying something, being loud or rude to waiters, ordering a salad and stealing food from the guy’s plate like it’s your birthright to do so, or laughing like a shrieking witch because something’s so darn funny!

These may seem like little things that no one notices, but trust me, these *little things*, well, they’re way more obvious and annoying that you think! [Read: 10 things girls should never say to guys ever!]

#5 Unkind attitude. Let’s get this straight. Guys view kindness as one of the biggest attractive traits about a girl. If you’re kind and sweet to others, be it people you know or strangers on a street, it’ll make a guy’s heart melt just a little more.

On the other hand, if you’re rude or too aloof, or lift your nose up and behave like most people on the street are beneath you, he may endure the date, but he won’t call you back.

#6 Baby talking. Baby talking with a guy or coddling him may be acceptable if you’re already in a relationship with him. But if you’re on the first few dates, talking like an infant, well, it is definitely one of the fastest ways to turn a guy off.

A guy may think you’re being cute if you act girly and sweet, but mouthing words like a baby that’s still learning to talk will only make him cringe. For baby talking to work, there needs to be an intimate bond between the guy and the girl. If you’re still getting to know each other, avoid talking like a baby. It won’t turn him on, and you won’t look sweeter doing it! [Read: 18 ways to be sweet and pretty on a date]

#7 Complaining attitude. When you’re talking to a guy whose attention you want, avoid putting him down or complaining about the things he does. Guys hate girls who pretend they’re high maintenance and act bitchy, and whine about everything the guy does, just to appear like they’re high class and sophisticated. [Read: 15 signs you have a high maintenance woman in you!]

#8 Self criticism. Are you the kind of girl who constantly puts herself down, just so others can pull you up again? Do you spend an hour making sure you look perfect, and then criticize yourself in front of a guy by telling him that you think you look really ugly?

This is an attention seeker’s way of trying to get attention and flattery. Getting a guy to acknowledge just how awesome you are by tricking him or constantly criticizing yourself in the hope of getting pampered by him would just leave him annoyed. Guys aren’t dumb and they can see through this kind of attention seeking behavior. And they’d want to stay away from drama queens who just love all the attention they can get. [Read: 16 attention whore signs to watch out for]

#9 Distractions. A girl who’s distracted on a date is a big put off for any guy. If the guy takes the time to plan a date, and looks forward to spending time with just you, show some respect by giving him your attention during the date.

Don’t spend all your time on phone calls, or lost in your own thoughts even when he’s talking. If you say something like “…I’m sorry, what were you saying…?” more than a few times on a date, the guy will definitely leave the date pissed off!

#10 Taking his chivalry for granted. If a guy behaves like a gentleman on a date and treats you respectfully by being chivalrous, don’t take it for granted. Don’t walk past a door he’s holding open for you like it was his duty to hold the door open.

If a guy displays his chivalrous side, acknowledge it with a smile or a ‘thank you’. Behaving like he’s your servant who’s only doing what he’s supposed to do won’t put you in his good books. [Read: 14 subtle first date mistakes many girls make unknowingly!]

#11 Getting too serious too soon. This is a big mistake many girls indulge in, without realizing it at all. If both of you go on a first date, don’t behave like you’re in a relationship already just because you’re having a nice time. You’ll just end up scaring the guy away.

Don’t get home from your first date and immediately change your relationship status on Facebook. And don’t start calling him frequently and expect him to talk for hours about his life and his future because he told you he likes you and wants to see you again for a second date! [Read: 13 oh-so-awesome ways to impress any guy you want!]

Keep these dating turn offs in mind when you’re on a date with a guy, but more importantly, remember that anything you do may be considered sweet initially. It’s only when you overdo something that the guy would want to back away from you.

It’s just like touching a guy on a first date. If you clasp his palm for the first time, he’d feel a tingle of excitement that’ll make him like you more. But if you pull his cheeks or throw yourself at him all through the date, it would only make him want to run away from you!

[Read: The dating girl code all girls definitely should know!]

Avoid these 11 biggest dating turn offs for guys, and avoid crossing the thin line separating crazy and cute at any point of time when you’re talking to a guy. Do that, and you’d be well on your way to making a great impression on him. 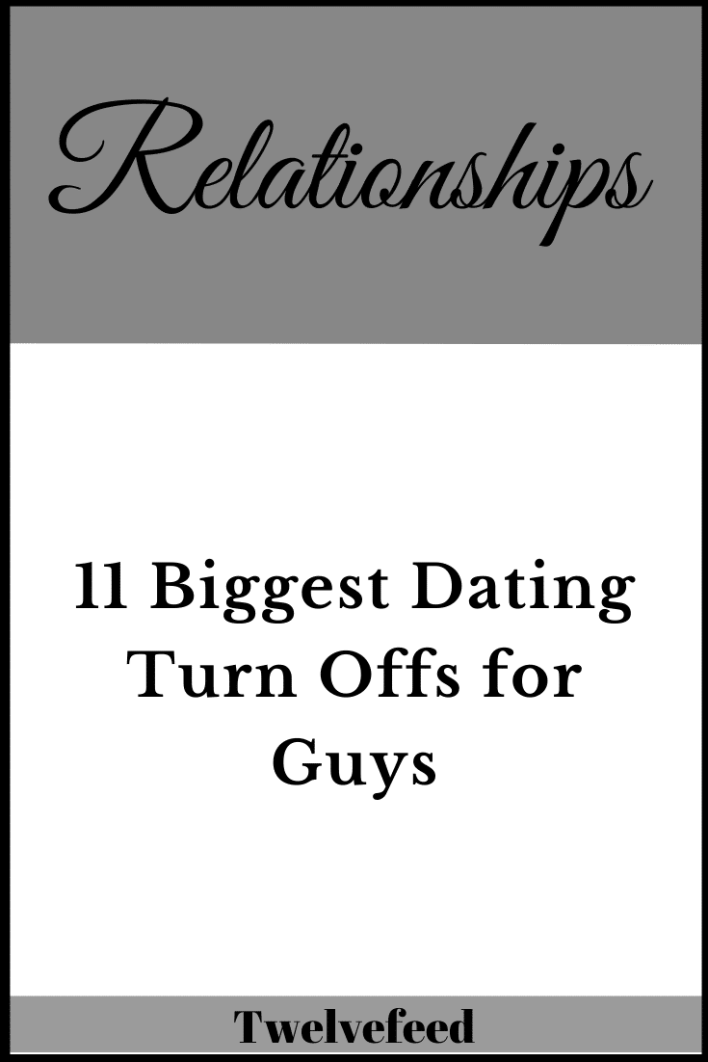 12 Things Guys Like in a Girl besides Her Appearance

15 Sweet Ways to Make a Guy Feel Needed and Wanted