If you want to make your relationship stronger, healthier and happier, don’t just wish for your guy to be a better man but also work yourself to be a better girl. Be the best girlfriend you can ever be to your boyfriend by following these tips:

1. Appreciate him.
What a man deeply desires is the feeling of being appreciated and acknowledged for what he provides. He wants to feel that his efforts become useful, meaningful and successful. When you see and appreciate your guy’s effort even in his most simple ways,  it’ll make him feel like the ultimate winner and he will do anything to keep you happy. Try to see his intentions behind an action and appreciate that.

2. Make him feel special.
Every girl wants to be treated by their boyfriend as the most special one in this world that most of them have already forgotten to treat their boyfriend the same way too. If you want to be an extraordinary girlfriend who stands out from the rest, make him feel special rather than just waiting for him to make you feel special. Love is giving rather than receiving anyway, isn’t it? So be thoughtful and show him that he’s your priority.

3. Be his adventurous companion.
What does your boyfriend want to do for fun? This is an important question, as all lasting relationships need to have an element of fun. Your boyfriend is also longing to explore, be wild and be free. This is the definition of fun for him. He wants his girlfriend to be his companion on his wild adventure. Thus, be willing to take an adventure with him and be aware of where the fun and adventure meter is at in your relationship.

4. Be honest.
If your guy asks you what’s wrong, tell him directly. Let him know what you think and what you need. And don’t make him guess what is wrong if there is a problem, because they hate it.

5. Give him space and freedom.
A lot of guys feel as if they were in a cage after being in a relationship. Giving him space doesn’t mean your relationship is in jeopardy, but instead it is a necessary boundary for him to have a healthy perspective on the relationship. Your boyfriend also needs a good balance of alone time to process his thoughts and feelings. Let him have his space and free time, in this case he’ll appreciate the time you are together a lot more.

6. Stop nagging, complaining and demanding.
Nagging will just make your guy tune out and it won’t get far. Instead, talk and discuss things friendly, there’s always another way to approach things. Guys hate to have a girlfriend who’s always looking for faults and errors. Thus, if you really love a guy, you want him to win, not to lose. So help him by supporting and giving him energy instead of taking it away.

7. Look better than ever before.
Of course in the eyes of your loving boyfriend, you are always the most beautiful girl in the world. However, you can always do better. By making efforts to always look nice, clean, and well dressed, your guy will even admire you more. Just remember to know what your man really wants you to wear. If he is more conservative, then you know what to do. It’s not how expensive or how physically attractive you think you will look like but it is how your guy’s eyes, mind and heart will approve.

8. Earn his respect.
A better girlfriend doesn’t just demand respect from her guy, but she earns it. Believe in yourself, have a strong personality, and show off your capabilities, it will make your boyfriend respect you for the person you are.

9. Be loyal to him.
Just like girls, guys also want to be the only one for their girlfriend. You should not give him causes for jealousy. The best girlfriend should not make eyes at his friends or even get acquainted with other guys in clubs or cafe.

10. Inspire him to be a better man.
You cannot make your boyfriend a better man. You cannot force him to be a guy you wanna be. However, you can be a good role model and inspire him to transform into a better person. So if you want him to grow personally and be a more successful person, show him how hard work, patience, diligence and self-discipline work by practicing these virtues yourself first.

11. Be a wife material.
Girls may come and go but a girl who’s a wife material is on a different level. There is no better way to be a greater girlfriend than to be a partner who is mature, responsible, and ready to take care of her future children and husband.

Whether you’re in a dating stage or in a relationship with someone, it’s important to know what your boyfriend really needs and how you can keep him. Remember that you are not just a girlfriend, but your role in your boyfriend’s life is important. So now that you already have the knowledge, here’s to being the best girlfriend ever. 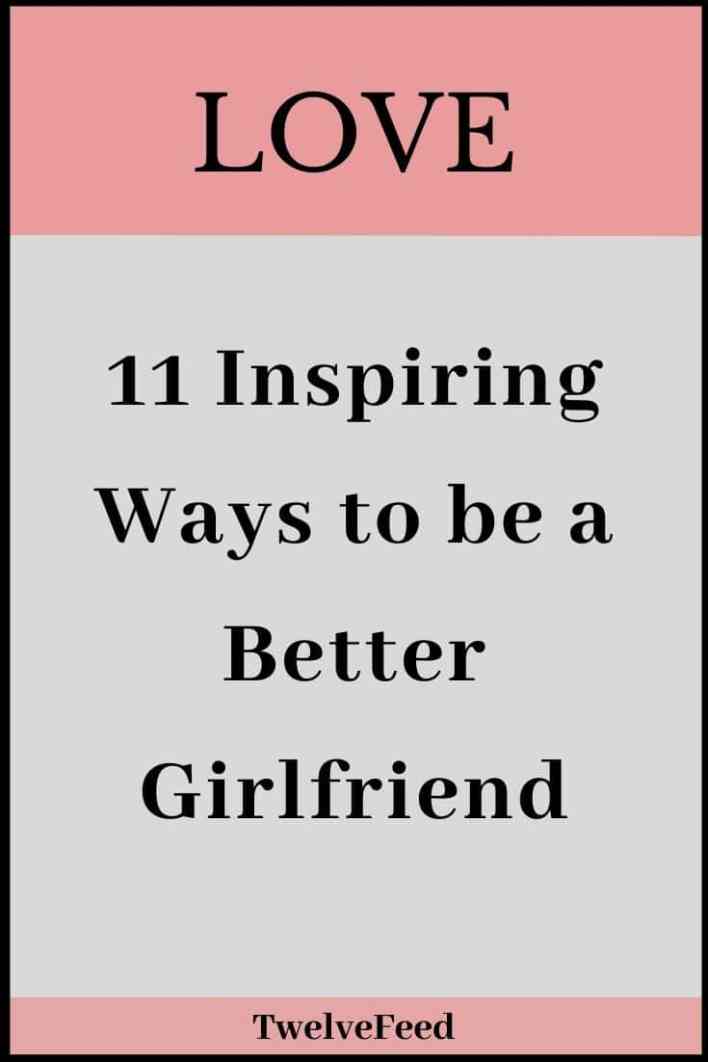 25 Ways to be a Better Boyfriend

6 Awesome Ways to be the Perfect Third Wheel