Perhaps one of the cruelest betrayals that anyone can suffer from is to be cheated on by the person they love, their soulmate, the person who once made them believe in forever.

Imagine meeting the love of your life only to get your heart broken just because they found someone else – and it all happened while you were still together.

If you’re one of those guys who think that cheating on their girlfriend is not a big deal and just a part of being a “real man”, then you have to listen well:

First of all, you don’t have the right to break her heart just because you think you can; she doesn’t deserve to feel unwanted and unworthy just because you’ve chosen to be selfish. Most importantly, real men respect and value a woman’s trust and love – and doing otherwise is not manly at all.

If you don’t listen now, these are just some of the million painful things that your girlfriend will suffer from if you cheat on her.

1. She’ll never get her confidence back.
Especially if your girlfriend is the shy and timid type. She’ll forever believe that she’s not good enough for anyone and for anything – and it will take a long and painful healing process for her to take that first step to recovery.

The betrayal can shatter her confidence and what you did will convince her that no matter how hard she tries and how good she is at it, she’ll always fail, she’ll always get hurt.

She’ll think that she’s the most unfortunate soul in the universe and nothing can ever save her from such damnation.

3. She can never trust anyone again.
She’ll start to think that just as how you have hurt and betrayed her trust, other people can and will definitely do the same. She’ll think everyone else is just like you, and in order to save herself from another heartbreak, she’ll build these stubborn walls around her and shut everyone out.

She’ll never believe in you again, even if you’re speaking the truth.

4. She’ll stop believing in love.
She won’t believe that true love still exists because you’ve broken her heart and you’ve proven that no matter how something feels and looks genuine, no one is capable of loving someone truly and faithfully – because of what you did.

Convincing her that you’ll do better, that you’ll change your ways will be useless – and if she can forgive you, don’t expect for her to be that same person again.

5. She’ll find more reasons to hate life.
Reality is not at all that perfect and if you break her heart this way, she’ll finally come to the conclusion that life is not worth-living. She’ll lose whatever hope she has for life and it could trigger a series of more serious and oftentimes damaging emotional turmoil within her.

It’s just a matter of time until she self-destructs and it will be too late to save her.

She’ll somehow find a way to put the blame on herself even if it’s quite obvious that it’s your fault and not hers.

7. She’ll never be the same person again.
She’ll turn into someone unrecognizable and there’s a big chance that it won’t be a good thing. Someone who have been hurt and betrayed can sometimes turn into a hateful and angry monster, ready to devour and attack anyone who tries to be near them.

For her, life will be meaningless and nothing can ever make it better.

9. She’ll suffer every day.
The pain will never go away and it might take years before she can genuinely feel alive and happy again. Your betrayal can suck all the happiness out of her and it will deprive her of seeing even the tiniest hope of better days.

She may look fine on the outside but deep within, there’s an eternal storm of pain, doubt and hopelessness just waiting to explode.

10. She’ll stop believing in the future.
All the dreams that you made together will just be a shadow of the once perfect love story that you wrote together. Cheating on her won’t only affect how she sees herself in the present but it will also poison her thoughts of the future.

She’ll find it useless and futile to dream higher not only because she lost her confidence but because she can no longer find a reason to keep moving forward – because you’re gone and you were a big part of those dreams.

11. She’ll grow numb and act heartless.
As a way to protect herself from another heartbreak, she’ll become this heartless and emotionless person. Her trauma from what you did will make her become cold and detached – and it’s the saddest thing that can happen to someone who just wanted to love and be loved.

No one deserves this kind of betrayal just because they loved too much. If you’re not happy with the relationship anymore, you have two choices: either you fight for the person you love or give up the fight. The former can make your bond stronger while the latter will save her from a more tragic heartbreak. 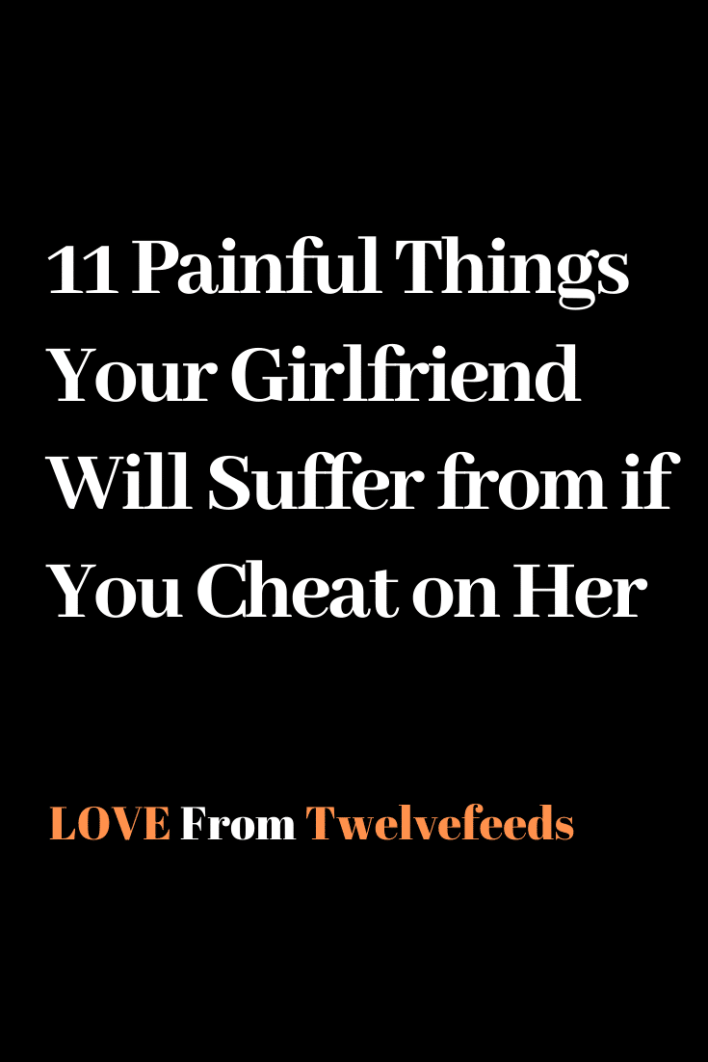 12 Ways to Make Your Boyfriend Fall in Love With You

This Is Where You Need To Focus And Invest Yourself In 2019, Based On Your Zodiac Sign