Is it the clothes? The way they carry themselves? The rigid discipline? The excitement and danger they face every day? Psychologists say that women gravitate toward men in uniform because their uniforms signify purpose and valor. They are the modern-day knights in shining armor, able to face all danger and deal with life’s troubles, leaving us to feel like the fairytale damsels in distress. And isn’t a little role play always very sexy?

So what is it that makes men in uniform so attractive?

Every woman will no doubt have a different reason for getting hot under the collar when the fire service is called, but here are 14 reasons to love that authoritative look.

#1 Snappy is the new sexy. While most men can even barely dress themselves and some look sloppy in suits, men in uniform look polished and snappy. Men in uniform, whatever their rank or organization, immediately give off a sense of authority and importance. We immediately notice them because the way they carry themselves automatically calls for attention, and when they approach us, we can’t help but be all ears *and eyes*.

#2 Dangerous Danny. Men in uniform give the impression that they deal with dangerous situations on a regular basis and valiantly conquer them all. From the military to the police force to the fire service, these men in uniforms not only portray their courage and daring, but they also give a sense of safety and security not only to women but to the public in general.

#3 Down and dirty. It’s not just the image of clean-cut soldiers in their uniforms that turn us on; their rugged, muddy, sweaty, and ash-ridden faces are enough to make us swoon like the heroines in historical novels. They’re the kind of guys not afraid to get down and dirty, or to get hurt and put their lives at risk, to save the people they serve—and the women they love. Oh my… [Read: How to find your fictional character crush in real life]

#4 Fit as a fiddle. Men in uniform are usually involved in physical activities and a lot of training that keeps them on their toes and in tip-top shape. And that rippling six-pack might be just the tip of the iceberg; if he’s got that much stamina and strength in the gym, imagine how much he’ll have in your bed.

#5 We need a hero. We all need a hero, and men in uniform are the real life versions of our comic book supermen. Men in uniform are our shining lights in dark days; our beams of hope in hopeless moments. They really do put their lives on the line to protect our freedom and rights. And what’s sexier than that?

#6 Oh-so-manly. When we see a man in uniform in a crowd, he stands out so much that you can’t take your eyes off him. This is because he stands a little bit straighter, a little bit taller, and a little bit prouder than the rest. He projects the image of a man we can look up to and count on, thereby making the attraction even stronger, and our knees weaker.

#7 Nice haircut! A man in uniform would never be sloppy or unkempt. Instead, he keeps his hair cropped and sharp and his face smooth and supple. While most guys go out with a five-o’clock shadow or, worse, a man-bun, we prefer men in uniform over hippies or hipsters any day. We like our men with the neat crew cut that accentuates the strong jaw and the cheeks that are stubble-free and ready for some kissing and caressing.

#8 Dear John. A military uniform might take your man overseas to serve his country. This means you’re thrown into a long-distance relationship, which can be romantic—especially when you write each other love letters, whether by postcards, real stationery, or even just email. There’s nothing more epic than the wait to once again be together, and when it does happen, there are fireworks and explosions—at least in the bedroom. [Confession: What it’s like to be a military wife in real life]

#9 Strong sense of service. These are men who swore to provide us with safety, to protect us from harm, and to save us from any danger. Our well-being comes even before their own lives, and this makes them great partners. A man in uniform is someone you can rely on; a man who knows the value of commitment and responsibility to his platoon and to his own family.

#10 We want to be bad. There’s something about men in uniform that makes them such authoritative figures. Meanwhile, we think that the way to get noticed is by doing something a little bit naughty—or maybe even breaking the law. We’ve always had that fantasy about being pulled over by a policeman, but instead of being apprehended for being bad, we get punished in the confines of the bedroom, handcuffs and all. [Read: 10 fun sex games to play with your man in bed]

#11 Take those off. Looking at those starched whites, the navy blues, and camouflages makes our minds wander to carnal territory. We take a look at those tailored cuts and how the uniforms accentuate their physical assets. We imagine what’s under those uniforms and how their manly, rugged roughness would feel under our fingers and against our skin. How can we say no to that?

Indeed, men in uniform stand out from the crowd. Aside from the physical and superficial things that are impressive about Sergeant Sexy, there’s even more to these men that appeals to us. Men in uniform represent security, safety, stability, honor, and discipline, which are just some of the many things we look for in a relationship.

While dating someone in uniform can also come with its own share of risks and difficulties, it takes a strong, confident, and even equally brave woman to date such a man. Having him come home safe and unscathed is enough for you to fall in love with him again and again. 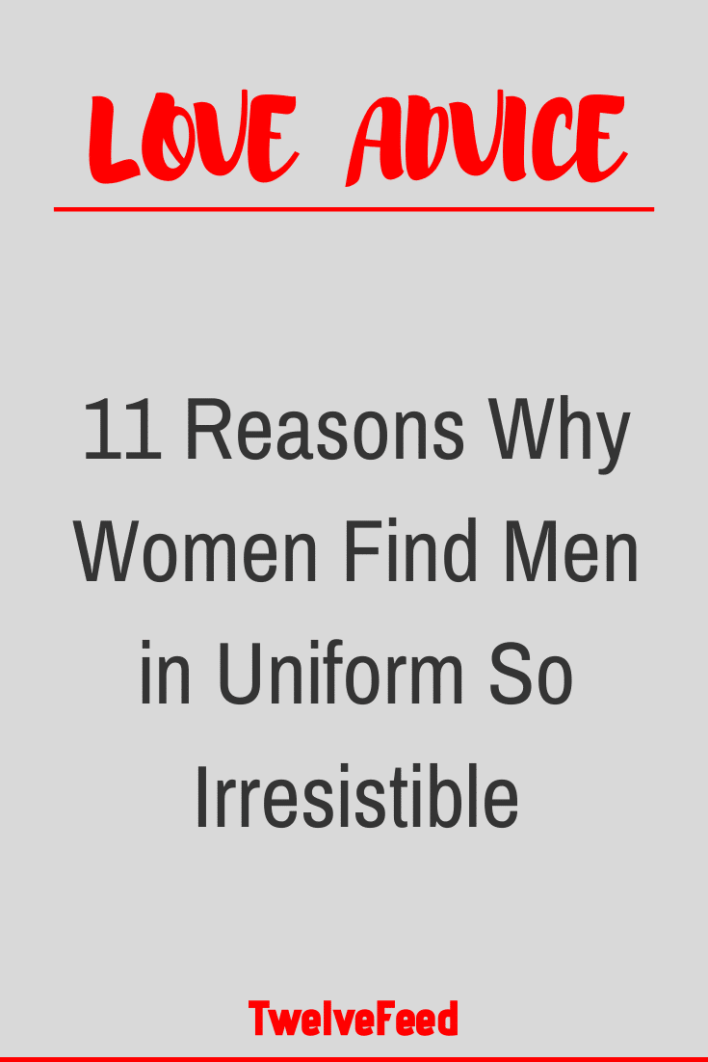