Thanks to films like Fifty Shades of Grey and shows like Gossip Girl, a lot of women romanticize obsessive and jealous behavior in their SOs. He just loves you so much, cares about you so much, needs you so badly, can’t live without you, that he acts irrationally, right? Anastasia Steele allowed Christian Grey to dictate her diet and wardrobe in a warped (and inaccurate) wild relationship and Blair Waldorf saw Chuck Bass’s grand gestures as romantic rather than emotionally manipulative. These blurred lines can make it harder for us to determine what is a natural inclination to protect the ones we love versus what is exerting an unhealthy degree of control. We think it’s cute if our boyfriend huffs at the mention of a new guy friend, but it’s not so cute if he picks a fight with them over nothing.

While men who are obsessively jealous tend to know what they’re doing – and why they’re doing it – others might see it in the way so many of us ladies do: as a skewed version of love, adoration, and devotion. With these 16 things a man will do to show he’s obsessively jealous in a relationship, we’re giving you the knowledge to know what qualifies as a warning sign the next time around.

It’s normal to feel better about your day after having a sweet encounter with your SO, but trouble might be brewing if your guy is coming to you for everything and using your responses to excuse his behaviour. In a relationship, we are supposed to be two individuals who come together and, ideally, make one another happier and better because of it. We do not get to use them as an emotional crutch.

A guy who is emotionally dependent on you will use you as an excuse for his mood swings or outbursts, and that’s just not fair to put on you! The need for constant reassurance about everything from his physical appearance to whether you still love him is emotionally draining. What he needs is a therapist, not a girlfriend, and you don’t have to be both!

Criticism sucks, even when it comes from the ones we love, and even when it’s constructive, it can hurt. That being said, a guy who’s obsessively jealous in a relationship will take any and all forms of criticism to heart, because their low self-esteem is partly what has turned them into the person they are in the first place! Hearing their subconscious fears spoken out loud adds fuel to that self-hatred fire, and if he’s acting wounded even after the tiniest remark, it’s because he wants you to take care of his bruised ego.

He probably says he’s “not like other guys”– which is a red flag in and of itself – and uses his sensitivity as proof of that. In truth, he just has a thin skin and if you don’t watch out, he could manipulate it so that you believe you’re the bad guy in this scenario.

9He Disapproves Of The Real You

He preferred your hair long and tells you so after you get it cut short. He doesn’t like that you go out for drinks with your coworkers on Thursdays after you’ve clocked out. He thinks your art is stupid and you should stop wasting your time. He says that you don’t need to eat two pizza dinners in a week because it’s almost beach season.

Having hobbies or friends or routines or interests that exist outside of your relationship is a threat to the obsessively jealous guy because they see it as competition for your time and attention. By mocking or degrading your hobbies, interests, or even dietary habits, he’s telling you that you’re not good enough and he isn’t allowing you to grow as a human being. Disapproval that masks itself as him looking out for you is insidious and something to beware of.

8He Stalks You Online

It’s always nice when your BF likes that hot Instagram selfie you just posted or helps to promote your new business by posting the page on his own Facebook account, but when he’s got alerts on his phone about your online activity or is regularly scrolling through your feed to find out where you’ve been, what you’ve been doing, who you’ve been doing it with, and so on, it’s time to look into breaking up – or getting a restraining order!

Online stalking can be a difficult legal issue to handle, but if your SO is contacting everyone on your friends’ list to learn more about you, it’s weird and scary. Reading up about you online and getting offended if you hadn’t yet divulged that info to him in person is obsessive behavior, and you wouldn’t tolerate it from anyone else, so why would you from your BF?

7He Knows A Little Too Much About You

A product of all that online stalking, a guy who’s obsessively jealous in a relationship will know things about you before you even tell him.

Sure, we all do a quick perusal of a Tinder date’s Instagram or Facebook to make sure they at least resemble their profile picture, but if your new guy is talking about your class trip from 2008, that’s definitely weird. When he knows the details about things you haven’t yet talked about, it’s because he’s finding the info somewhere else, and that’s not a normal thing to do. In a healthy relationship, you learn about one another together as things progress. One person shouldn’t try and “beat” the other by studying all their facts and history. That’s obsessive and, if he’s already kept a mental catalog of everything thus far, there’s no telling what he might do next.

6He Checks Your Phone

Phones have passwords and privacy protection for a reason, people! Looking through your partner’s phone is looking for trouble and if you trust them, there should be no reason for you to go through his texts in the first place, right? Trust is the key issue here, and if you have a guy who insists on you showing him who you’re texting or what you’re doing on your phone, it’s because he’s jealous, obsessive, and completely insecure.

Even if he doesn’t ask outright for your phone, he might try to covertly sneak a peek over your shoulder or pretend to grab it from you. Even if you’re just messaging your mom or reading up on the latest Kardashian drama, he thinks you’re talking to another guy and that irrationality is a big no-no.

5He Wants You All To Himself

It can be sweet at first to hear that your boyfriend wants you all to himself. He just can’t get enough of you, he loves you like crazy, he needs you so badly, etc. When you first start dating, you are likely to be a little bit isolated, thanks to all that passion flying around, but obsessive jealousy doesn’t usually feel like obsessive jealousy from the start.

Missing you is one thing, but demanding that he become your number one, above everything else, is quite another. While it might be flattering when he says he wants to spend all his time with you and can’t bear to let you leave, it’s his insecurity showing already, because he knows (at least in his mind), that the moment you’re away from him, the threat of someone else taking his place sets in.

4He Intimidates Other People When They’re Around You

Guys who are obsessively jealous in relationships will intimidate other people – specifically the other men in your life – to stay away from you. This helps to isolate you, positions him as your knight-in-shining-armor, and keeps you firmly in his control. Threatening your male friends, either directly or indirectly, keeps you close to him and away from the clutches of other men, which, again, he feels destabilize your relationship, even if there’s nothing to worry about. It’s not a sign of love or a cute reminder that you’re hot stuff – it’s irrational (and sometimes violent) jealousy.

3He Suspects The Worst Of You

If you’re an insecure person, you might project your perceived inadequacies or failings onto other people. Cheaters in relationships often do this, accusing their SO of stepping out on them because they themselves are so plagued with guilt over already doing the same. Guys who are obsessively jealous in relationships will likewise suspect the worst of you, if only so that you’re forced to comfort them and remind them that they’re the only guy for you.

Insecurity masquerading as concern is a very manipulative way for an obsessively jealous boyfriend to get what he wants, which is you all to himself. Making you defend yourself upsets the power balance and puts him right back in the driver’s seat. Even when you know you haven’t done anything wrong, his actions will have you thinking otherwise.

Obviously, it’s a warning sign that the guy you’re with isn’t okay if he’s threatening to hurt you or himself, but a red flag you might not have suspected is the guy who constantly threatens to break up with you but never pulls the plug.

When a man is obsessively jealous, he’ll pull this move so that you try desperately for him to stay with you. (And he’ll probably do it again and again until you get the sense to leave.) You beg him to give your relationship another try, you profess your love for him, you do whatever it takes to keep things afloat. These are his dual needs for validation and control at work here, and it keeps your relationship in a precarious place where he’s the one calling the shots, which removes it from mutual – and healthy – territory.

The biggest warning sign for an obsessively jealous boyfriend is his controlling behavior. We’ve touched on different ways he can try to control you throughout this article, but the overarching idea of exerting control on another person is something that is not acceptable in a healthy and successful relationship.

Jealousy and obsession comes in many forms, and it can start small, like surreptitiously checking your phone to something bigger, like accusing you of cheating to ordering you to call or text him a set number or times when you’re out to demanding you inform him of your whereabouts to choosing your clothes or career or friends to refuse to allow you to end things on your own terms – it’s all forms of abusive behaviour, and that’s not adorable or protective, it’s obsessive. 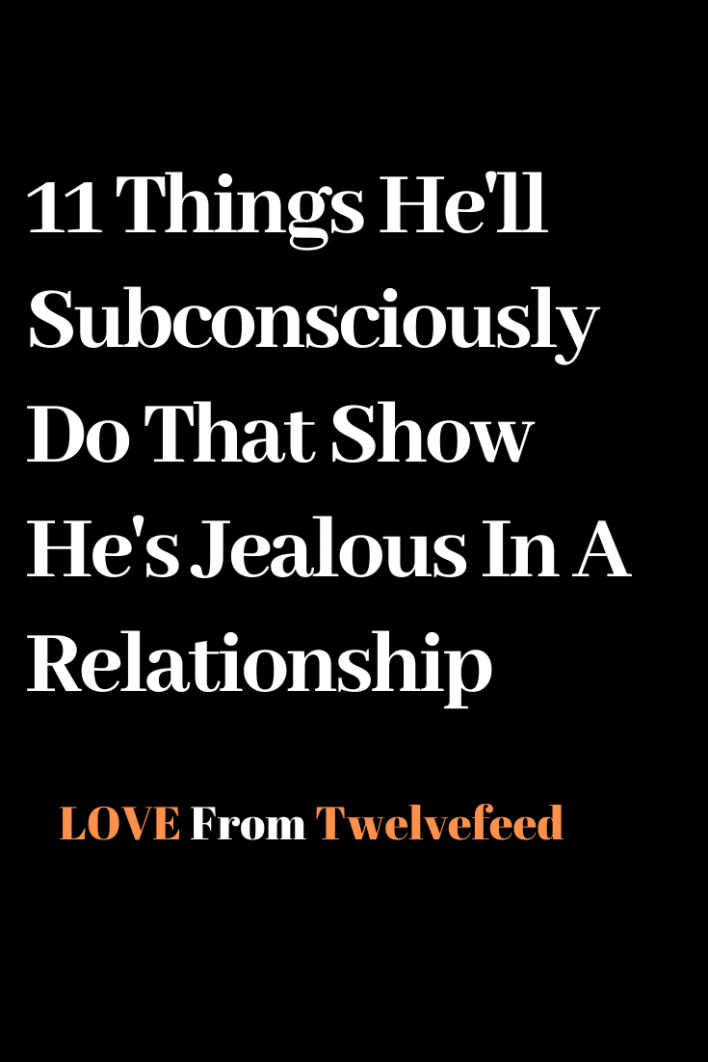 If You Answer Yes To 9 Of These 16 Questions, You're In A Unrealistic Relationship

Only People Who Agree With These 21 Things Maintain Successful Relationships