While people always say that in a relationship, women are the ones who easily get mad at men, that’s not always the case, and it depends on the situation. For instance, did you not answer your boyfriend’s calls while you were out with your friends? Did you keep talking about your ex/es? Did you fail to show up on your date? Or, did you underestimate the things that he loves doing, like his favorite video game? These are just some of the possible reasons that your boyfriend gets mad at you.

1. Say sorry, and mean it.
If you’re the one who committed a mistake, then set aside your ego, and apologize to him. Make sure that you mean it. He will know if you’re being sincere; he can see it in your eyes. If your apology is genuine, then he will see that you realize your mistake, and you understand why he got mad. Remember that he’s mad for a reason. He might just be worried if you’re safe, or he’s mad because you failed to see the things that are of great value to him. Hence, apologize for your lacking.

2. Hug him tight.
If he’s used to seeing you as the aggressive one in the relationship, why don’t you give him that hug now? Your boyfriend might just melt like butter when you give him a warm embrace or a kiss. The fact that you’re the one who runs up to him and suddenly hugs him is already a big deal for him.

3. Give him a massage.
Would he resist a massage from his favorite person? I don’t think so. He might be mad at you at the moment, but he would still appreciate any sweet gesture of yours. So, why don’t you give him that massage that he needs to reduce his stress? Massage him in the neck if you know that’s his weakness. He might just forget he’s mad at you because you really took the effort to show how much you want to make it up to him.

4. Be extra sweet.
If a massage on his back is not his type (highly doubt it though), there are still a lot of ways to make him smile when he’s mad at you.  While you’re used to being the one pursued by your boyfriend when you’re mad or sulking, it’s time for you to do the opposite. Ask what you can do for him. Lower your voice when you talk to him. Prepare him some coffee or cold beverage. Be extra sweet, so he’s left with no choice but to smile and forget about his anger.

5. Cook for him.
You might have heard the line “The best way to a man’s heart is through his stomach” a million times, but it is always true. So, why don’t you cook his favorite food? You can also cook something that you haven’t tried yet, and make him the first one to taste it.  He might just forget his anger once he sees the mouth-watering dish you’ve prepared for him. If it doesn’t taste as good as how it looks, he might still end up laughing or smiling because he knows that you did your best just to make you smile.

6. Throw some jokes.
If you think that ladies are the only ones who fall in love with men’s sense of humor, then you’re wrong. Men would love to see the lighter side of women. No matter how mundane your jokes can get, your boyfriend will still end up laughing and realize how charming you are. So, don’t hesitate to make your boyfriend laugh even when he’s mad at you at the moment.

7. Compliment him.
If you think women are the only ones who want to get compliments from their boyfriends, then you’re wrong again. Sometimes, all you need to do is to say how cute and adorable he looks when he’s mad. Notice how his hairstyle looks really good on him. Notice how his rugged look is perfect on him. Your boyfriend can’t help but smile when you shower him with simple but genuine compliments.

8. Offer to do what he’s always wanted.
Has he been asking you to play a video game with him? Has he asked you to go to the gym together? Or, has he always wanted to take you to a basketball or baseball game and watch together? If so, why don’t you ask him that you do these things? The moment he enjoys doing those things with you, he will not keep bringing back the issue as to why he got mad at you.

9. Give him small surprises.
While girls are usually the ones surprised by their boyfriends, why don’t you break the convention? It’s time to reciprocate those small surprises that your boyfriend gave you. Leave small notes saying how much you love him. Take him to his favorite store or restaurant. Buy him his favorite comic book. Throw small surprises for him to make him feel loved, giving him no more reason to get mad at you.

11. Ignite the torch.
Let’s face it. Most men, if not all, would love to be touchy-feely with their partners. And yes, physical contact is important in a relationship. It’s part of keeping the fire of the relationship. You’re the one who knows your boyfriend, so you know what works best for him. You know how to make him happy. Be extra touchy.  Be extra romantic.

Indeed, women are not just the ones who get mad. There are times that your boyfriend will get mad at you, and when he does, go the extra mile to stop his anger. Remember that a good relationship should be a give and take between the two of you. Make your boyfriend smile just as how he tries his best to make you smile everytime you get mad at him. 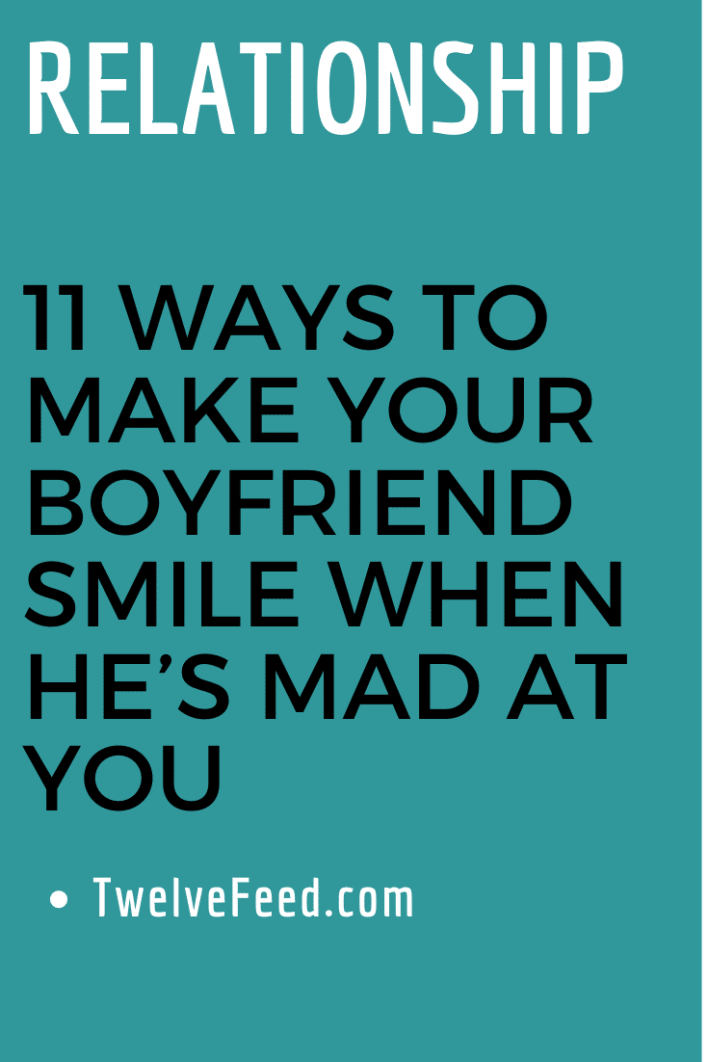 11 Tips on How to Stop being a Possessive Friend

11 Tips to be Yourself in a Relationship