If you’re trying to impress a guy into liking you, you don’t need to wait too long to read his mind.

Almost always, a guy makes up his mind about a girl within the first conversation.

Well, unless of course, he just sees you as a friend.

If a guy puts you into his friend zone, he may not stereotype you into any of these women.

But if a guy doesn’t see you as a friend, and considers you as a dating potential, big chances are, you’re in one of these categories in a guy’s mind.

[Read: 30 facts about guys that can help you read his mind]

Now all guys may not acknowledge this to you, but as a guy, I can tell you that subconsciously every guy has a *special* name for a girl he hopes to date or hopes to avoid dating.

If you’re his friend, don’t worry, you may not find a place here. But if you’re a girl trying to get a guy’s attention, you’re definitely on this list in the guy’s mind.

You may not like these stereotypes of women, but hey, some things happen involuntarily in a guy’s mind. [Read: 30 subtle, obvious and sexual flirting tips for girls]

The 12 dating stereotypes of women in a man’s mind

If you were a guy, and hanging out with your group of guy friends, bonding over a beer, you’d find these stereotypes of girls crop up every now and then in a conversation about girls.

All guys use these terms and a few more to categorize girls they notice at work or in college.

Read these 12 stereotypes, and ask yourself the secret question, where would the guy you like stereotype you?

#1 The one night stand woman. To a guy, this is the girl who’s extremely easy to sleep with. She’s probably slept with half the football team or a department at work. This kind of a girl may think she’s sexually confident.

But to a guy, he’d think all he needs to do is take her out to dinner and buy her a gift, and she’d screw him in return. The sad part here is that all guys speak about this girl like she’s trash. They’d say they’d never hook up with her ever, but secretly every guy wants to sleep with her because she’s just so damn irresistible and sexy! [Read: 16 signs you’re a sex kitten and loving it!]

#2 The nice girl. The nice girl is a sweet girl that every guy likes. Guys like her company but don’t always date her because she seems like such a nice person. This girl usually falls straight into the friend zone because she’s too sweet, too nice and just too warm and friendly to date. She’s the friend all guys want, mostly because she’d give them the right introductions and the access to get to know other girls.

#3 The backup woman. This is the woman a man smooth talks and flirts with all the time. He occasionally goes out with her too, but he doesn’t really date her or fall for her. A backup woman is the woman a guy keeps as his backup, for days when he’s lonely or unable to get any girl to date.

She’s always ready to meet the guy at his beck and call, because she has a small crush on him already. And he takes her easy because she’s always available for him. To a guy’s friends, a backup girl is like owning a second car. The guy who has a backup girl is almost always looked up as a great dude because he gets a girl to date or make out with whenever he wants.

#4 The unattainable woman. This is the woman who’s so hot and awesome, a man shrivels up down there just thinking of approaching her. She’s extremely confident and attractive, and she has a great job. Most guys would never even dream of approaching her and would be happy just lusting after her from far away. She’s the kind of girl only really great guys approach, and most lower mortal men see her as a sexy but snotty bitch. [Read: Are attractive girls really mean to guys?]

#5 The woman who thinks she’s hot stuff. This woman is the butt of all jokes on a guy’s night out. Ever met a girl who thinks all guys are attracted to her or trying to hit on her wherever she goes *even though you know for a fact that no guy is actually interested in her*?

Well, this stereotype is that girl. They crave for a guy’s attention all the time, and pretend like it’s the guy who’s actually trying to win their attention. Guys hate women who think they’re hot stuff when they’re really far from it.

#6 The high maintenance woman. This is the girl who can be a great date and a great girlfriend, but she’s just too difficult to please or afford. She’s probably the girl that’s born with a silver spoon or has been raised by aristocratic parents who have spoilt her with riches. She always looks like she just stepped out of a magazine photo shoot and is incredibly attractive, but she’s also out of reach of guys who don’t have deep pockets. And in most cases, she has no idea she’s high maintenance! [Read: 15 signs you’re a high maintenance woman and don’t know it]

#7 The off-limits woman. This is the woman a guy wouldn’t pursue or date even if he finds her extremely attractive. Confident guys aren’t afraid of stealing girlfriends when they get a chance, but if a girl’s dating his good friend, or if his single friend likes a girl, any good guy would stay away from her even if he finds himself falling for her. It’s just the way guys work, unless they’re backstabbers who don’t care about friendships.

#8 The gold digger. Everyone knows this girl. She’s the one who dates a guy only after evaluating how much he can spend on her. As a girl, you may not realize it, but there are more gold digger stereotypes out there than you think.

When a girl talks to a group of guys, but gives more attention to the guy who drives a sports car, chances are, in a guy’s mind, she’s definitely a gold digger. A gold digger isn’t necessarily a bad woman. It’s just that money is pretty up there in her list of priorities. Guys are attracted to gold diggers and do date them, but only if they’re smitten by them and don’t care about splurging on the girl just to keep each other happy.

#9 Sugar momma. There are different kinds of sugar mommas. There are the rich older women who’ll splurge on a guy just to get into his pants. And then, on the other extreme, there are nice and sweet girls who’ll pay every time the guy and the girl go out to dinner *just to win a guy’s affection*.

There’s nothing wrong with being a sugar momma, but most guys don’t take these girls seriously or look for a long term commitment with them. Always remember, make a guy work for your affection by keeping him on his toes. Don’t try to buy his affection, it never works. [Read: How to make a guy chase you and get more interested in you]

#10 The guy chick. This is the friendly and yet, attractive girl. She’s definitely dateable, but her boyish behavior could put many other guys to shame. She’s into burping games and drinking bottoms up, and she loves a good game. Guys like the guy chick because she’s always fun to hang out with, and the sex is good. But after a while, a guy who dates a guy chick would always start to feel like he’s in a relationship with another guy, and not a girl. [Read: 20 secret things guys wish girls knew about guys]

#11 The prude. This is the girl who doesn’t like talking about sex, or anything sexual. She may be interesting to date, but her stuck up behavior could leave any guy bored of her. She’s too stiff, doesn’t like dirty jokes or doing anything reckless now and then, and definitely doesn’t like trying something new in private.

She may know everything about sex already, but she pretends like it’s such a bad thing. And this faà§ade of prudishness that she portrays to the world could put any guy off because she’ll come off as a fake more than anything else. [Read: How to talk to a guy and make him like you]

#12 The perfect girl. No guy really knows the real definition of a perfect girl because it differs from one guy to another. But if a guy likes a girl or falls head over heels in love with her, chances are, she’s the perfect girl for him. [Read: 12 really easy ways to make a guy like you and want you more]

But if you want a hint on how to be this stereotype and make every guy fall for you, for starters, learn to behave like a girl. The only reason why guys are so drawn to women is because of how awesomely different girls are from guys. Smile more, laugh more and be more of a girl when you’re with a guy. Really, it doesn’t make you seem silly even if your ungirly friends say it does.

[Read: 13 signs your friends are ruining your relationship]

There are many more personal stereotypes of women in a guy’s mind when it comes to dating and love. But these 12 types should sum up most of them. Do you have any dating stereotypes yourself? 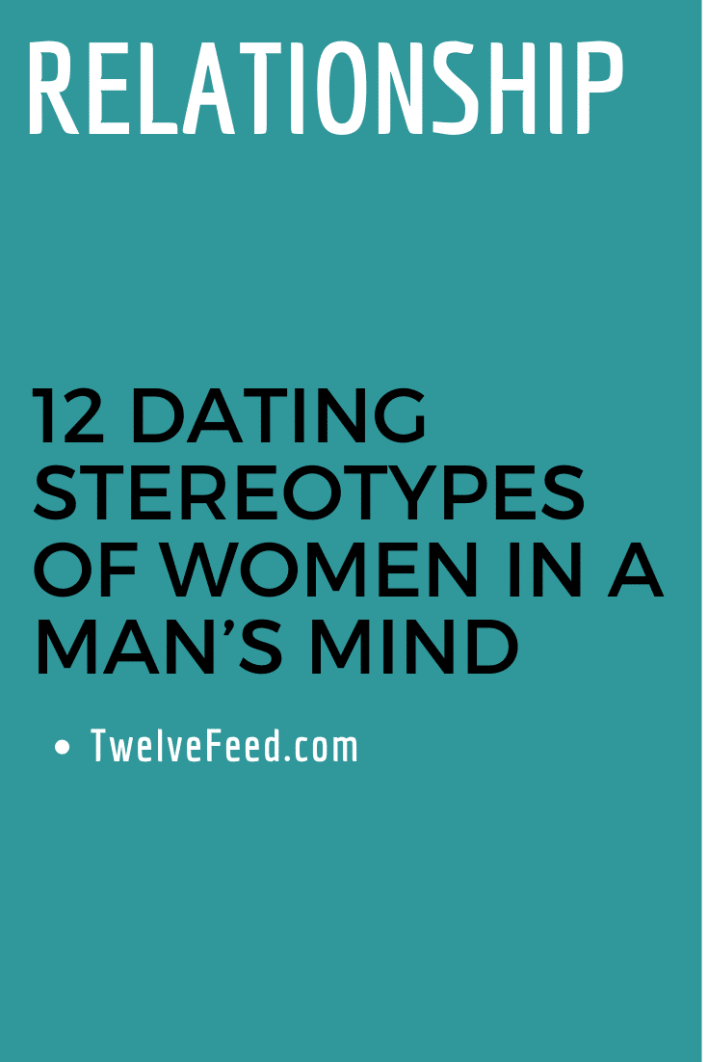 Love Triangles and its Confusing Complications