Are you dating a guy who seems to have a rather soft spot for his ex?

If you’re troubled by the quicksand of sappy emotions your man has for his ex flame, you’re not alone.

And it’s completely acceptable to hate him for it.

Really now, if he’s still in love with his ex, what the heck is he doing with you?

If a guy tells you that he still thinks of his ex fondly, you could admire his honesty.

And then you can kick him out to the curb.

But what do you do when he says he’s over his ex, but you still don’t believe him?

[Read: Does your boyfriend speak to his ex often?]

Is he over his ex?

Getting over an ex is never easy.

If you’ve been in a passionate relationship that had to end, you’d know how hard it is to get over a special someone.

While it’s not easy to forget someone you once loved, there’s a thin line between forgetting someone and staying in love with them.

If your boyfriend still loves his ex, chances are, he still wants to get back with his ex. And that is definitely not something you should put up with.

You’re not a rebound girl nor are you his nanny to nurse his heart to good health so he can regain his broken heart pieces and pursue his ex again when he feels better.

If you see any of this behavior in your new squeeze, it’s time to have that talk with him. Does he love you or is he still in love with his ex? Are you just a rebound or are you someone he truly loves? [Read: How to tell if he’s serious about you]

After all, the start of a relationship is all about infatuation and lust. If he says he loves you, yet gets flustered when he sees his ex or spends all the time thinking of his ex, can he ever love you when all he does is dream of her?

Here are 13 signs that can help you figure out if he’s over his ex or not.

Only a guy who’s constantly bothered by thoughts of his ex would like ranting about it to his present girlfriend. If your boyfriend constantly finds ways to bring his ex into the conversation without you initiating it, he’s definitely still missing her. [Read: How to get to know a guy you want to date]

#2 His browser talks. Unless your boyfriend is a sneaky ex lover, he’ll definitely leave a few signs now and then on his computer or phone. If your boyfriend’s browser history shows that he’s been visiting his ex’s facebook or twitter account or her blog often, he’s definitely not over his ex.

So how much is too much? Checking up on an ex once a week is barely acceptable, but if he’s been frequenting his ex’s pages more often than that, you need to have that talk with him.

#3 He looks flustered when he bumps into her. The next time you walk hand in hand with your boyfriend and bump into his ex, watch how he behaves. Does he let go of your hand immediately, or does he get flustered or mumble like an awkward prepubescent child? If his heart races or he starts sweating around his ex, she’s definitely been running marathons in his mind behind your back.

#4 He keeps in touch with her. Exes don’t stay friends. Well, unless they’ve become sexless after a long boring relationship. There’s no good reason for exes to stay friends unless there’s something binding them. If your new boyfriend is good friends with his ex and frequently contacts her, you definitely have reason to worry.

#6 He’s her Man Friday. Exes don’t have to stay friends, but they can still keep in touch with each other. But if your boyfriend behaves like her slave and is always ready to help her out of a spot, he’s definitely trying to stay in her good books for a reason. Only a guy who’s still in love will constantly try to help an ex out with her life, be it by being the handyman or someone to chauffer her around.

#7 He enjoys getting teased with his ex. Does your boyfriend stiffen a giggle or does he blush like a little girl when you pull his leg with his ex or when his friends tease him about a romantic incident involving his ex? Men don’t get shy. They get surly and angry when they’re being teased about a bad incident with an ex. Only lost and lovelorn lovers like fantasizing and talking about exes with a glazed look of happiness plastered over their faces. If your boyfriend loves hearing about his ex or getting teased with her, he obviously likes being associated with his ex even now.

#8 He’s still got her gifts or memories lying around the house. A boyfriend who still holds a stuffed toy given by his ex while lying in bed is never good news for a new lover. Does your boyfriend have all her gifts placed neatly around the house? Does he still use the watch she gave him? And wait a minute, is that her toothbrush near his sink? Yes, you’re allowed to stick it up his romantic ass!

#9 It’s been less than three months since his break up. Break ups take time to heal. If you’re in a relationship with a guy who’s broken up with his girlfriend less than three months ago, he’s definitely not forgotten about his ex already. And chances are, gasp, you’re his rebound girl even if he doesn’t know it himself. [Read: 15 signs you’re in a rebound relationship]

#10 He clings onto his memories. Do you find him clinging onto his memories when he thinks you’re not around? Does he hold something of hers or droolingly stare at her facebook page when he thinks you’ve left the room? Does he stare at an old text from her when you aren’t around? If you see your boyfriend dreamily staring at his ex’s face on his computer while tenderly moving his fingers across her image, walk out of his place and never walk back in again.

#11 He’s not ended the relationship yet. This is a tricky place to be in. This is something you’ll come to experience if you steal a guy from his girlfriend. Was he still in a relationship when you wooed him away with your sexy ass? He may not have broken up yet, and he even though he’s told you that he’s ended the relationship, he may still keep in touch with her. [Read: Signs he’s dating someone else along with you]

His excuse? “It was such a big shock to her… I need to ease her out of loving me over time… You understand, don’t you, sweetheart?”

Your answer. Yes, slamming the door is a good move.

#12 He hasn’t deleted her texts. Does your new boyfriend have loads of his ex’s lovey notes and dirty talking texts? Seriously, which guy in his right mind keeps his ex’s old texts stored in his phone? There may be a huge list of texts, but deleting it is the right thing and only thing to do if he’s actually over her.

#13 He has her pictures. Does your boyfriend have pictures of his ex on his computer or in his phone? Or perhaps, even lying around the house? That’s not good, but it’s acceptable as long as he understands to delete or move all those photos away into a CD as soon as you voice your insecurity. [Read: 15 subtle signs of a controlling boyfriend]

If your boyfriend was in a relationship for a while, he may even have his ex’s nudie pictures and steamy sex videos too. Of course, he won’t tell you about it.

As long as he’s moved all his ex’s pictures and videos into some corner of the attic, never to see it again, it’s all fine. But if he has a few images hidden around the house *hidden, but easily accessible*, then he’s definitely taking a good look at his ex while you’re all alone in the shower.

Sometimes, all of us miss our exes or think of them. But there’s a thin line between a passing thought and an obsession. Keep an eye on these signs that he’s not over his ex and talk to him about it. It’ll clear the air and help you make up your mind. 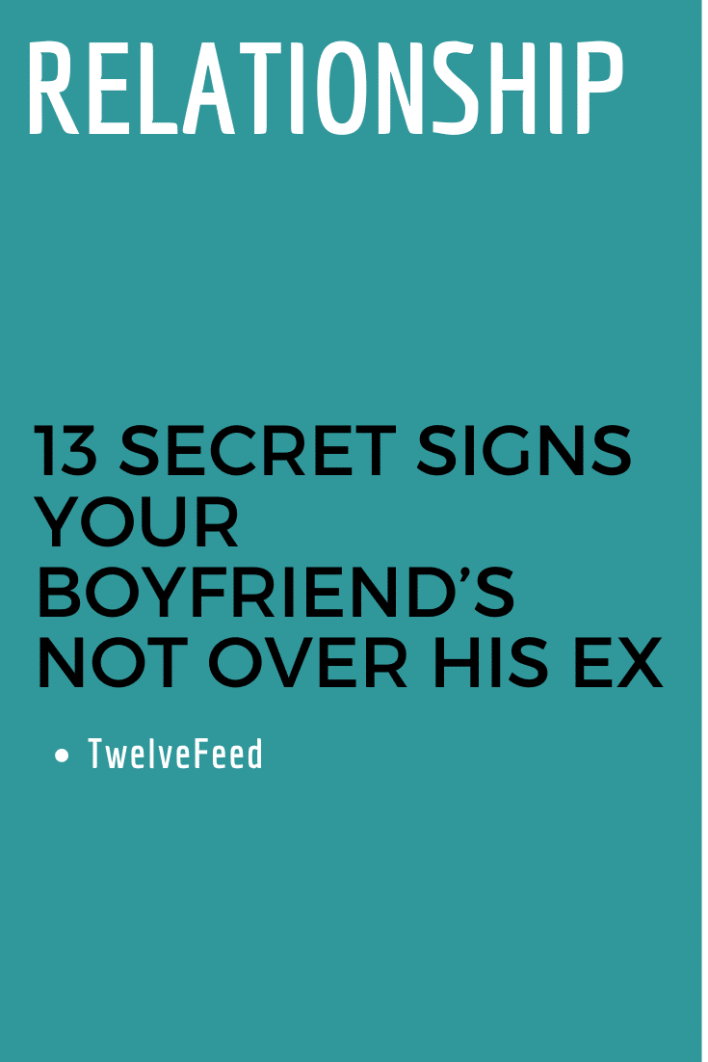 10 Creepy Guy Types You Need to Avoid Talking To