Sometimes it’s our gut feel– a woman’s instincts, as they call it.  At times, it works for our advantage while on some occasions, it’s just us being a downright paranoid girlfriend suspecting our boyfriend why he is not answering our calls thrice in a row.

Being with a guy who is both faithful and loyal to you is one of the best feelings you can ever feel out of a relationship. Faithfulness and loyalty are two non-negotiables when it comes to relationships.

But how would you truly know if your guy is not playing around with you? Sure, nagging and constantly accusing would not help. So, let these signs guide you to tell if your guy is a faithful and a loyal one.

1. He deletes all of his dating apps he created before he met you.
With this age where looking for love, affection or just merely someone to talk to means scrolling through your fingertips, cheating can be done with ease. And sometimes, what we believe as “harmless” conversations can further lead to the ruin of relationships. So what is the point of keeping them? He would not need to use these as backup plans anymore because you are already with him.

2. He never puts himself in situations where he is tempted to cheat.
Meeting with another woman on late nights? Trying to get closer to a good-looking officemate of his? Responding to a flirtatious text of a female acquaintance? No, he avoids trapping himself in a situation that can lead him to cheat before it’s too late.

ALSO READ: How to Be a Loyal Partner in a Relationship: 11 Tips to Remember

4. He never keeps a secret from you, no matter how small.
When it comes to you, he is an open book. He tells almost everything, including his social media account password. This is not about you being suspicious and that you do not trust him, but rather, he is just comfortable most probably because he does not have anything to hide.

6. He has good morals.
He surrounds himself with friends and mentor who helps him grow morally upright. Someone who has a good moral ascendency would not be easily lured to temporary pleasures that might corrupt their integrity not just as a partner, but also as a person.

7. He doesn’t mind doing anything for you.
He makes sure you are okay and safe even though it is inconvenient to him to do so because he wants to feel you are loved. If you are sick, he’ll show up with a warm soup and some of your favorite food. If you are sad, he will be a shoulder to cry on. By being there by your side through the good and especially, bad days, you’ll know he’s a loyal man.

8. He stands up for your relationship.
Between talking crap and seeking advice, he knows the big difference. Even if the two of you had a big fight, he doesn’t talk crap about you or the relationship. This is simply because he respects you and your relationship.

10. He makes sacrifices for you.
Got that dream job in a faraway city? As romantic as it may sound,  he would move mountains or cities just to be with you.

12. He’s told his family and friends about you.
When you are together, he does not hide or panic at the sight of his family, friends or acquaintances because he does not feel ashamed in admitting his feelings for you. He has told his friends almost everything about you- from how you’ve met and how and why he was totally in love with you.

13. He never takes you for granted.
You would feel if you are his priority and not just an option. If you two have made plans together on the same day his friend decided to watch a basketball game, he won’t leave you hanging the last minute. Whenever he makes an important decision, he considers your opinion as a big contributing factor.

Absence of faithfulness and loyalty are the main causes why relationships fall apart. Cheating is the worst kind of being selfish. A word of warning: cheating does not only manifest in actions and words. It also comes in lingering thoughts of having an affair, or imagining “what could have been” or “what ifs”.  As relationships experts’ advise: stop it as soon you realize you’re dreaming of being with another person.

Finally, a relationship would not work if you only focus on watching out for signs that your boyfriend might be unfaithful or disloyal to you. Work on improving yourself and your relationship too. Always remember it always takes two to make the relationship a satisfying and a long and lasting one. 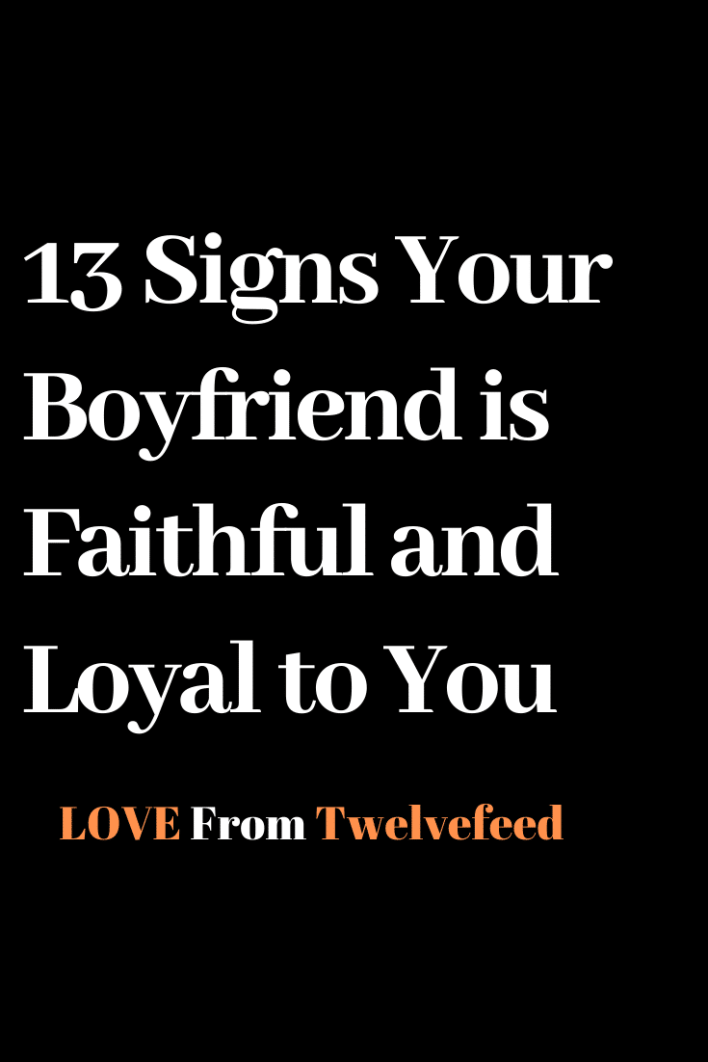 11 Ways to Know If You Are Dating the Right Person

7 Best Places to Meet the Right Guy for You