The fights don’t seem to end. You roll over every morning and your heart sinks seeing him there. Every little thing he does annoys you. You are likely in a relationship that makes you miserable. But how do you know? How do you know if you are not just in a slump, if you are depressed, if you should keep trying because maybe you re not miserable after all and just being moody? Here are 13 signs you are totally miserable in your relationship, which probably means that it’s time to fix it or move on. ‘Sh*t or get off the pot’ as some would say – let’s just hope he put the toilet paper on the right way or all hell will break loose.

13You Dread Being Intimate

It’s time to go to sleep and he rolls over and starts running his hand down your chest. Your first reaction? A magnitude 7 shutter. You feel absolutely repulsed at the idea and even closing your eyes won’t make this feeling go away. In fact, you may actually consider doing all of the dishes, dirty and clean, to avoid going to bed at the same time, just to put it off a little while longer.

12You Debate Whether Or Not To Invite Him

It’s your great aunt Suzan’s 72nd birthday and she has invited the whole family to her backyard bbq and lawn bowling party, significant others included. Would people even really notice if you came alone? It might be a nice change to get away for a little bit and spend time with people you love. Oh wait, isn’t he supposed to be included in that group? Hmm.. maybe you’ll just hide the invite in the dishwasher for a few days, it’s not like he ever opens it.

11You Give Out Your Number At The Club

Girls night out means dancing at the local watering hole. You get your sexy heels on, even though they kill your feet, and head on out to be ogled at by other men. It’s not like it matters, you have a boyfriend. But what if one day you wonder what it would be like if you didn’t. The sexy man who asked you to two-step just asked for your number and you cant help but wonder what the harm would be if you let those 7 numbers fall out of your mouth.

When you had the “what are we chat” with your current love you both vowed to delete all dating profiles for good. You logged out and deleted the app, while conveniently not deleting the profile as well (hey! that thing took an hour to make). How simple would it be to re-download and get back to fishing and swiping? Too easy. And it’s done. Now what? Do you leave the phone out for them to find? Or is this actually just more for you so you can secretly flirt? Either way, this is probably a big step toward ending it all.

9You Push Their Buttons On Purpose

You agree with everything they are saying but you can’t let them know that. For some reason devil’s advocate and disagreeing just for the sake of watching them burn up seems like a far better idea. You nit pick and pester and pretty much just start fights over everything. If you are unhappy they should be too.

What if you keep talking in a baby voice? How about getting drunk every night? What do they hate the most, maybe that’s your new favourite thing. You know the relationship is over but you don’t want to be the one to have to end it, so you do everything in your power to put the onus on them. Will this make you feel better? Probably not… you don’t really know why you are doing it but at least you know that way there are 2 people working towards that goal.

7Your Venting Turns To Gossip

It’s common to vent to your friends about things going wrong. However, once that venting turns into bad mouthing and you are gathering allies rather than just chatting you may want to look at why you are doing that. You are telling your friends about all of the horrible things they have done, how miserable you are, how you are questioning everything… If you love someone you should be their biggest supporter, so when this changes ask yourself why.

Fight? What fight. You don’t care if he is out all night with his friends, you don’t care that he is hiding his phone from you, you don’t even care that he was flirting at the bar. You just don’t care, period. He can go do whatever it is that pleases him and you will go do what pleases you. When you lose the passion and will to fight you are probably just too miserable in your relationship to even talk about it and it might be time to walk away.

Any wrong move and he will blow up, so you walk around with a filter, hiding from confrontation. You can’t tell him how you really feel, you are scared to tell him about the good things going on for you, and you can’t even complain about anything. Not being able to be yourself would make anyone miserable and maybe he is feeling the same way. If you’re unhappy it is likely that he may be too, so talk about it, nobody deserves to live this way.

Your energy levels are down and you seem out of it. Your friends keep asking what is wrong and you always say “I’m fine” as if everyone doesn’t already know that means the opposite. You cry when no one is around and put on the best face you can afterwards because you don’t want to believe it is over and that you made it this deep into misery. You are supposed to be strong, you are supposed to make it work, you are great at giving advice but can’t seem to take it yourself. “I’m fine” is just another way of saying “help me.”

3You Start Eating EVERYTHING

Chocolate? Pizza? Pop? Bring it on. If he isn’t making you happy at least some sugar and carbs will. You start eating with reckless abandon and eating your feelings. Feel a tear coming on? Stuff a twinkie in your mouth. Food is the best thing about your day and you don’t care how he feels, because he clearly doesn’t care about how you do. Plus, if you keep eating and gain weight maybe he WILL start paying more attention. Maybe it is a change that will get you both more active together, or maybe he is shallow and that will be the last straw for him anyway… There could be perks to this whole thing after all – just stay healthy.

2You Fear What Will Happen Post-Breakup

You’re already worried that you won’t find anybody else to love you. Are you fit enough? Are you jaded? Are you actually crazy and this whole thing is your fault? The relationship isn’t even over and you are terrified about all the things that will come after. If you were really happy you might be trying to think of how to fix this one, rather than making the next one work.

Maybe that’s it. Maybe you have found someone else that makes you happy and now you know what happiness should actually feel like. Whether you have gone out and cheated or are emotionally cheating, or really just confided in another male friend… When you start comparing your man to others it’s a sign that you are miserable in your relationship. 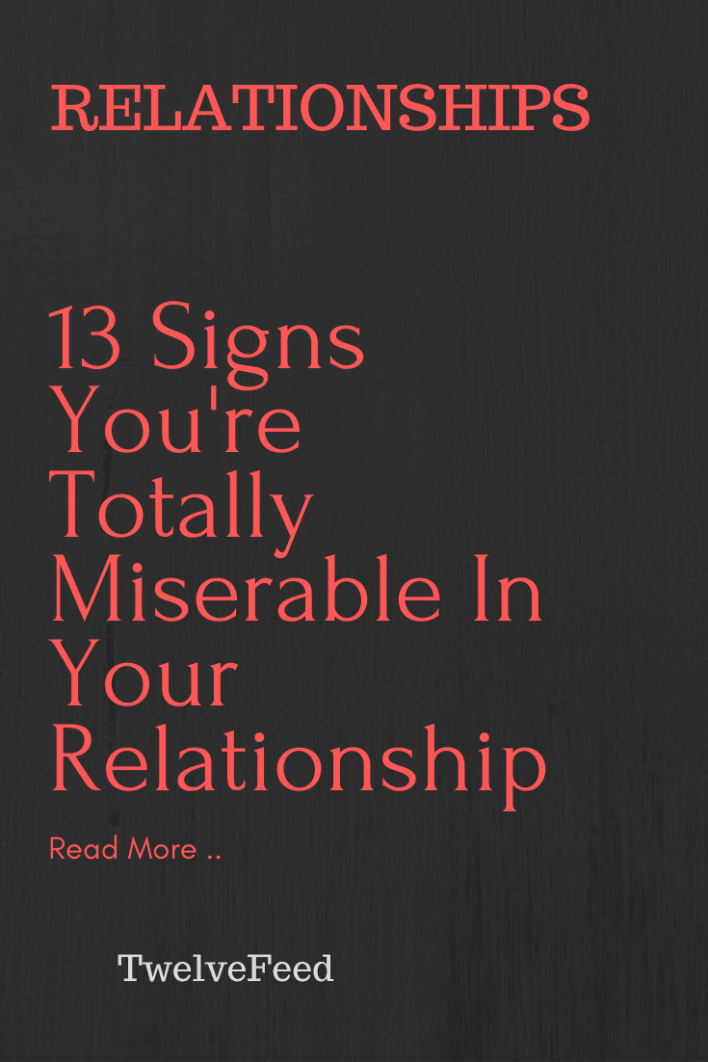 13 Signs Your Relationship Is Stuck In That Gray Area