When your husband takes a shower the minute he gets home, or your wife answers her calls outside the room or in the bathroom, is there a good chance that your spouse is cheating on you? Well, that’s what movies and popular culture would seem to make us believe. However, this isn’t always so. What subtle changes in your partner actually signal troubles ahead?

We’ve all had our share of failed relationships. Things start off rosy. Butterflies in the stomach, picnic at the park, dinner date at a swanky restaurant, and hot sex afterwards. It’s the honeymoon phase. However, as many relationships do, feelings wane, and from there, things can go south slowly or swiftly.

Instead of being blindsided by an oncoming problem, keep your eye out for some of these red flags. They might mean the difference between your relationship lasting or failing.

Subtle changes that can mean the end of your relationship

Sometimes, you’ll know when the relationship is on its dying breaths. There are more fights than there are days in the month, and less and less kind words are exchanged. But then there are teeny tiny changes in your partner that can warn you of stormy days ahead.

#1 More hours spent on the phone. Some people nowadays seem to spend more time on their phones rather than interacting with the people around them. Phones and the various mobile apps and games make for a compelling source of entertainment. This is normal.

However, if your partner seems to be spending way more time on the phone than they previously did, then it can be a red flag. They might be texting somebody or spending more time chatting on social media apps. Or, it may also be that they just downloaded a new addictive game.

#2 Exaggerated phone awareness. Phones are a ubiquitous presence in our daily lives, and as such, phone security is a must. You put a security code on it to deter other people from looking at its contents. You always have it with you, so as not to lose it. However, when these security measures seem overblown, then you might have to be on alert.

If your partner seems to take their phone wherever they are, even when in the shower and even if the only thing that can open the phone is a fingerprint scan or a 12-character code, and you have never even tried to look at their phone before, then it can be a red flag. They might be hiding something pretty serious to go through all those lengths.

#3 Second phone. If modern TV shows are to be believed, the moment a person gets a second phone or a disposable phone, they might be hiding an illicit affair, or worse, an illegal activity. When they have to go outside the room or to the bathroom just to answer a call, then something might be up. Be observant, but don’t be paranoid. They might just be talking with their friends about your surprise birthday party.

#4 Frequent nights out. Spending time with friends or with other people is a healthy part of being in a relationship. An occasional night out with your friends provides a welcome respite from the demands of the relationship and allows the partners to recharge. However, if you see a sudden spike on these night outs, you might want to inquire further. Thrice a week night-outs for months in a row is surely a cause for concern.

#5 Wine and whine. An occasional glass of wine at dinner is normal. However, if for every argument you have, their first instinct is to grab a wine glass, something may be amiss. If you find them coming home drunk more nights than they usually do, then it’s a red flag. They might be having a problem, at work or otherwise, that they can’t share with you.

Try to be more receptive to their thoughts, and inquire about their day. Let them share their hurdles. Or else, they may look somewhere else for a more supportive shoulder to cry on.

#6 No more gifts. Some couples express their love through gifts. There need not even be an occasion. They give small gifts, big gifts, simple ones, and extravagant ones. For other couples, gifts are given on special occasions only. However, it may be a cause for concern if your partner suddenly fails to give you a gift on a special occasion, such as your birthday, anniversary, or Christmas.

Worse, if they don’t even remember to greet you on such occasions. They may just be too busy or too thrifty, but if it isn’t so, then it may be a sign of the value they place on the relationship… or lack of it.

#7 Goodbye travel plans. Taking a vacation from time to time can serve to recharge the dynamics of a relationship. You remember the excitement of seeing new things and meeting new people, and you share this excitement with the person you love. They say making future plans to travel is a sign that they still see you in their future. Thus, it can be worrisome if they are no longer making travel plans, even though funds are not an issue.

#8 No more kind words. At the beginning of the relationship, couples exchange silly romantic words to show their love and affection. As time passes, these naturally decrease, as the partners settle in the comforts of daily life together. Their language of love changes from sweet nothings to gestures of love and concern.

However, it’s another thing altogether if your partner doesn’t seem to say any kind words anymore. No more “please,” “thank you,” or “you’re welcome.” No more good mornings, good nights, and not even goodbyes. Be wary as a lack of words often betrays a lack of feelings.

Worse, if they do this in front of friends or WITH their friends. This can seem condescending or belittling, but they may not even be consciously doing it. You can inform them of your feelings at a more private setting, but if they still don’t stop or worse, dismiss your feelings as invalid, it’s a huge sign that respect has fled your relationship.

#10 Argument fouls. In any relationship, having an argument is inevitable. At the start, you and your partner may not argue as often, so as not to rock the boat. However, as the relationship progresses, arguments become more serious. However, the trick is in fighting the responsible and reasonable way.

When your partner argues in an underhanded manner, such as using sarcasm, dismissing your arguments, rolling their eyes, or walking out the door without listening, these are red flags. If your partner is invalidating your feelings or your thoughts and showing a lack of respect, there is a big likelihood that the relationship will not last.

#11 No more goodbye kisses. During the honeymoon phase, couples seem to be glued to each other. Kisses are plentiful and touches are constant. However, as the honeymoon phase passes, these things decrease in frequency. This is absolutely normal. However, if the activity is something that has become a tradition or a ritual between the two of you, and suddenly they stopped doing it, then it can be a red flag.

For example, if you used to share a goodbye peck before you part for work, and suddenly, they just buzz out the front door without so much as a goodbye yell, then something might be up.

#12 I love you… not. When your partner seldom says it anymore, considering that they used to do so all the time, it might just be a natural progression in a relationship. However, when your partner doesn’t say “I love you” anymore, even when prompted, then that definitely is a red flag. Again, lack of words betrays lack of feelings.

#13 Sex in absentia. At the beginning of the relationship, you can’t seem to get enough of each other in bed. However, as time progresses, sexual desires wane, and sex becomes less and less frequent. When foreplay is forgotten and cuddling after sex is refused, you might have a problem on your hands. However, do consider that a lowered sex drive may also be a sign that your partner is having problems in other aspects in their life.

You may feel like your relationship is smoothly sailing with not a hint of wind to rock it, but then you look to your partner, it seems they are trapped in a calm with the relation-ship going nowhere. Worse, it may even be the calm before a storm. It’s up to you to recognize the subtle red flags, so you can prepare and not be dragged overboard. 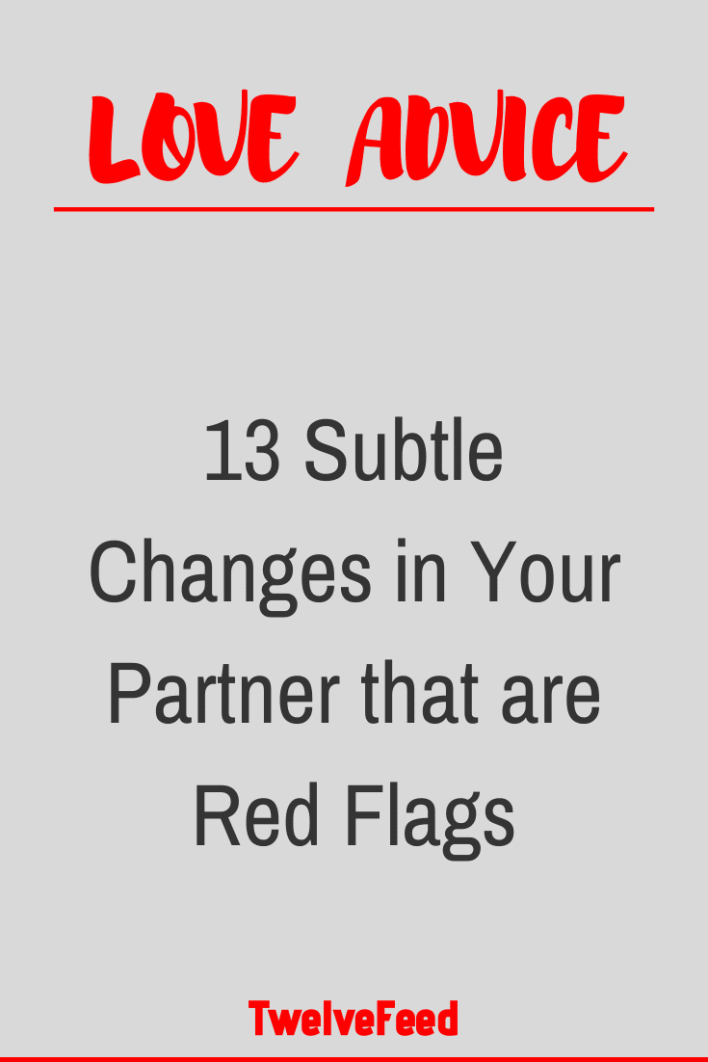 9 Reasons Why You’re Stuck in a Silly Situationship