Do you feel like you and your man are drifting apart? Are the two of you coming close to calling it quits? All relationships have their down times, but the best relationships work together to have just as many, or more, up times.

We live in a world where everything seems disposable. People think that if a relationship doesn’t magically work, then they can just move on to the next person, only to fail again. Just because you and your partner are stuck in a rut, it does not mean it is time to throw in the towel and call it quits. Quite the opposite.

Salvaging a relationship is a two way street. It takes a lot of communication to fix a relationship and to breathe life back into it. In other words, it takes work, but it is often worth the extra trouble.

There are things that you can do to repair and revive a relationship and there are things you should avoid. For example, learning to listen takes a huge part in salvaging a stale relationship. Avoid playing the blame game, because it will bring about the end of the relationship faster than you can say “my ex-boyfriend”.

13 Think About Why You Chose Him

Think back to the time when you first met him. How did he make you feel? What attracted you to him? What did he do that made you swoon? Create a list of all the positive things that made you fall in love with him and give that list to him. Ask him to do the same for you. Reviewing all the positive qualities you first saw in each other can go a long way towards feeling better about a relationship. It will give both of you a solid ground on which to grow and even improve your relationship.

12 Have an Open Talk

Sit down with your significant other and have an open talk with him. Tell him that you just want the opportunity to salvage the relationship and make it even better. Agree to not get angry with each other and openly discuss what you each feel is wrong with the relationship. Talk about the things that bother you about him and allow him to do the same to you. Figure out what the two of you can do to change and make things easier for each other.

Plan an hour to spend with your significant other making a list. Take a piece of paper, fold it in half, one side yours and one side his, and number each side one through five. Begin talking with him about what you would like in a relationship and allow him to do the same. As the two of you talk, agree on doing up to five things for each other. For example, if you want help keeping the yard clean and he agrees to become more involved then add to his side “help with yard work.” If he is frustrated that you always have your friends over when he gets home from work, agree on when you could have your friends over because, hey, sometimes all a person wants is a bit of quiet after getting home from work. Add the solution to your side of the list. After the list is completed, put it up on the refrigerator and make a point of holding up to your side of the bargain.

It is far too easy for couples to fall into a routine. Day in and day out, nothing is new, exciting, or different. Bring some spontaneity back into the relationship. Send him a bouquet of flowers while he is at work. Put on some sexy lingerie before he gets home. Make dinner for him wearing nothing more than an apron. Take him out to dinner and go to the new restaurant in town. It doesn’t matter exactly what it is you do for him, just make it something that he would not expect and make it something that he will definitely like.

9 Let Go of Past Grudges

Have a grudge talk with your partner. Choose one grudge you have been holding onto and discuss it with him. It can be about anything from the past that still hurts you, such as when you felt that he was flirting with your best friend or the time you felt he was choosing his mother’s demands over your needs. Explain to him why the incident hurt you. When you are finished, ask him to share one of his grudges with you. Listen to what he is saying and help him resolve this grudge he has been holding onto.

There is nothing more annoying than a righteous person. Don’t be that person. You are not always in the right. In fact, none of us are. We are just mere mortals trying to make better lives for ourselves. With that in mind, begin to change the way you see your partner. He is not a bumbling failure and he is just like you: a person with hope, dreams, and feelings. If he is the one behaving like a righteous butthead, remind him that he is not perfect and that he is as human as you are.

There is no better way to move a relationship forward and towards a better future than to set a common goal together. The goal can be anything that the two of you want. You both can choose to lose ten pounds together and plan out walks, hikes, and going to the gym together. You can set a household goal, such as saving up for a new patio. The two of you can spend time looking at new patios, decide what you both want, and about how much it would cost. Then you both start saving money out of your checks until there is enough to get the new patio put in. When the two of you reach one goal, set a new one to work towards.

Jealousy has destroyed many relationships, even when the jealousy was completely uncalled for. I have known many people who felt that the only way they could make sure their partner loved them was to try and make them jealous. Men and women are both guilty of doing this. It could be simple as you saying that a guy was staring at you in the bar just to see your guy’s reaction or he might announce that a female co-worker keeps talking to him. If you are the one trying to make him jealous, stop doing it. It will drive him away or he will take it as an excuse to finally cheat on you. If he is the one doing it to you, you have two options. First, you can talk to him about how it makes you feel. If he doesn’t stop after the talk, do what I did when my boyfriend kept flirting with other women: ignore him. If he realizes he can’t get you jealous, he will stop acting out for attention.

Sure, sex doesn’t solve everything, but it can resolve stress in your relationship, work stress, and, if you get a babysitter, the stress kids naturally bring into a relationship. Add some fun to the sex, too. Don’t just get naked and lay on your back. Get a book on sexual positions and make a plan to try out each one. Give each other body massages. Get some toys. Do whatever it takes to make the sex fun and exciting again.

It happens. When you first started seeing each other, the two of you would always make plans and go out on dates. Then things started to get in the way and the two of you slowly stopped going out together. Make a solid plan to spend more time together doing something that you both love. Set a date once a week to do something special. Start taking walks together, visit museums, go to the movies, or go take a photography class together. It doesn’t matter what you both choose to do on date night, as long is it gets you both together, enjoying something you both like.

Family members can easily undermine and destroy a relationship. You think they should have your back, but in reality they are only looking after their own selfish needs and wants. The same can be said about some friends who meddle in your relationship. If there is a problem person or relative in your relationship, it is time to sit down and have a talk with your partner about removing that person from your lives. This can be done easily if it is only a friend. If it is a family member, that person needs to be put on the back burner and told directly that you both do not appreciate him or her getting involved in your lives.

We all make mistakes, but there is nothing worse than being reminded of that mistake each and every day. One of the kindest things you and your partner can do for each other is forgive each other for past mistakes and future mistakes. No one is perfect and we are all prone to failure and screw ups. If you catch your partner making a mistake, consider quietly fixing it for him instead of yelling at him about it. Relationships thrive on forgiveness and letting go of the small, petty stuff.

You did it when the two of you first met. You seduced him, enticed him, and got him back to your place for the kill. No doubt he still dreams of the night when you wanted nothing more than him. We all want to be seduced, to be shown that we are wanted, so why not give that back to him? On his next day off, plan to seduce him all over again. Seduce him back into the bedroom in the middle of the day. Seduce him in the car on the way to a late night dinner. Reenact that first time you got naked together, and bring back that old thrill and excitement of being wanted. 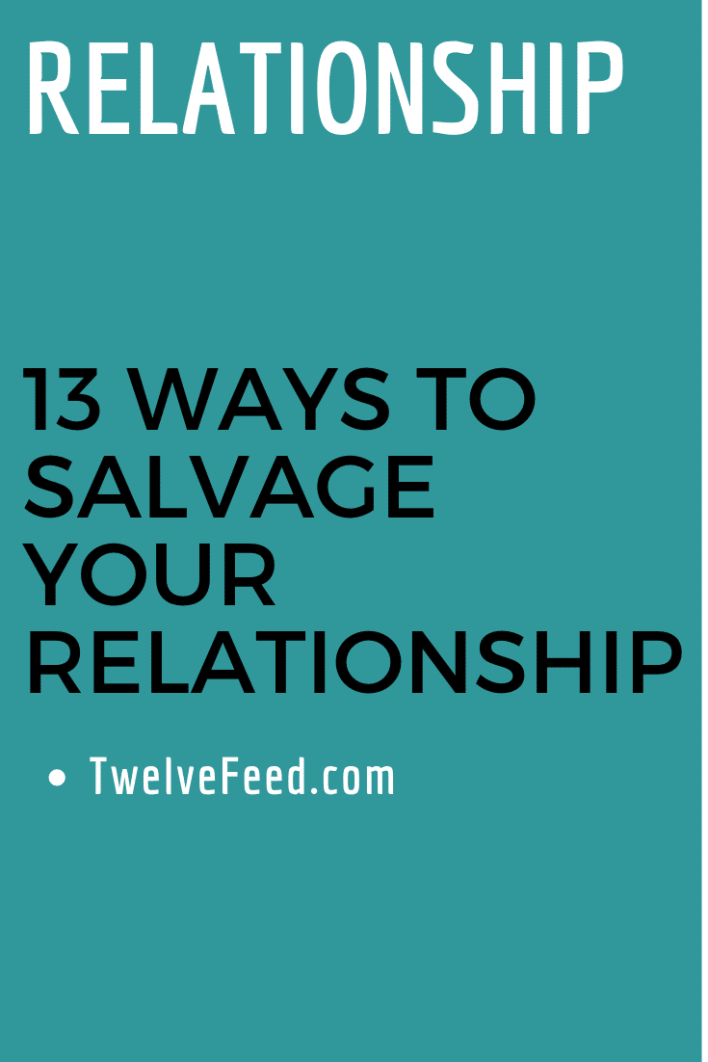 13 Signs You're Not Ready For A Relationship

13 Signs Your Relationship Is Normal