I think every couple goes through the phase of having their significant other be irritated with them for seemingly no good reason at all. But maybe there is a reason behind their sudden agitation that you just didn’t pick up on.

Some people can be set off by a simple phrase or even just a word that you may find perfectly acceptable. It can be hard to determine what the specific thing is that has set off your partner.

I, for one, get overly annoyed when I’m being rushed. Even though my boyfriend is just trying to let me know it’s time to go, when he tells me to “Hurry up,” I all but have a meltdown. It may seem silly, but it just irks me in ways I can’t explain!

While many phrases may seem harmless and you may just be saying them out of habit, they’re likely the reason your significant other gets pushed over the edge sometimes. We’ve put together a list of phrases that could potentially be the reason your partner is annoyed with you. If you’re using any of these, maybe you should think of another way to speak your mind.

#1 Did you do____ yet, like I asked? Fill in the blank with whatever chore, favor, or activity that you had asked them to do. Why do you think these types of questions are always met with a hissed, “I said I would, didn’t I?” It’s because when you ask stuff like this, you’re nagging your partner. And who doesn’t get annoyed when they’re nagged?

#2 Why? This question may be simple, but when it comes to the mental sanity of your partner, a “Why?” could diminish it quickly. Now, don’t get me wrong. You can ask about certain things and it’s just fine, if the conversation calls for it. But when they do or maybe even buy something and it’s met with a snarky, “Why?” then they can get irritated very quickly.

#3 You’re just like your mother/father. I think we can all agree that this phrase is sure to bring on an argument. This phrase is rarely—if ever—used in a complimentary manner. Looking closer, that means you’re not only insulting your partner, but your partner’s parents. Steer clear.

#4 You never ____. First of all, starting any point that you’re trying to make with “you” will cause problems. This is because all you’re doing is pointing out THEIR faults in a situation. You’re just telling them the things that they’re doing wrong, and that’s it. I’m not surprised that people get upset with this phrase at all! I would, too. Instead, use “I feel” statements, such as, “I feel upset when you don’t prioritize me.”

#5 ___for once! Adding “for once” at the end of any question or statement will annoy your significant other to no end. Why? Because it’s insinuating that they NEVER do the thing you’ve asked of them. A common example is, “Would you just listen to me…for once?” Your significant other really never listens to you? Come on. And don’t lie! You would get mad if they said the same thing. [Read: 6 things you should never ever say in a fight]

#6 Calm down. Another very common phrase that tends to have the opposite effect than what is intended! This makes people upset for a number of reasons, the main one being that if they are not calm, they’re upset and need to express it. Dismissing someone’s reaction with a flippant, “Calm down” is basically dismissing their feelings.

#8 Whatever. This phrase is very closely related to the one above. Whatever does not just mean whatever. It means that things are left unsaid, and leaving a conversation *or argument* hanging is just plain annoying. Hearing that word will make your partner think you either don’t care, or you just don’t want to figure out what’s going on—two very irritating stances, in any situation. [Read: 8 things you need to tell yourself when you’re annoyed with your partner]

#9 Do whatever you want. This is a phrase that means the opposite of what it is. Why is it so irritating? Because now your partner knows that they CAN’T do what they wanted to in the first place. Instead, they have to sit there with you and figure out which part of their activities you have a problem with. Again, this is related to issues not being said aloud.

#10 Sure. I find this phrase annoying for a lot of reasons. First, what does it even mean? Yes, no, maybe? It’s a very unclear phrase that leaves your partner uncertain of what you mean. The second reason it’s so irritating is that it’s a very nonchalant word. When this word is used, it’s often associated with not caring. So you have a combination of carelessness and uncertainty. Say a simple yes or no.

#11 You’re overreacting. There’s nothing that will make your partner overreact like telling them that they are. If they’re overreacting *in your mind* then it means that the topic is a big deal to them. Uttering this phrase makes it seem like you don’t find the issue as pressing as they do—which can agitate them further. [Read: 10 deadly phrases a guy should never tell his girlfriend]

#12 You shouldn’t eat that. Really? You’re going to tell your partner what they should or shouldn’t eat? No wonder they’re cranky. People don’t really like being told that their decisions are the wrong ones. And they ESPECIALLY don’t like that their significant other is insinuating that they need to watch what they eat. Come on. Can you really blame someone for getting irritated?

#13 If you really cared about me you would ____. *Insert dramatic eye roll.* This one is just plain annoying, to everyone. If your partner really didn’t care about you, then they wouldn’t be there. It’s that simple. It is frustrating to be told, constantly, that you don’t think they care. [Read: 10 things girls should never say to guys ever!]

#14 “Mhm.” This isn’t so much a phrase as it is just a sound. And that’s the point. It’s extremely irritating when someone can’t even muster up a response to something you’ve said. It can also be a means to say that someone doesn’t believe you, or that they disagree with you, but don’t want to put in the energy to say so. It can also be seen as a sign that you just aren’t listening—which of course is going to annoy your partner!

If you’re guilty of frequently using the above phrases, then it’s no wonder your partner seems to have a short fuse! Avoid annoying your significant other and skip these phrases whenever possible. 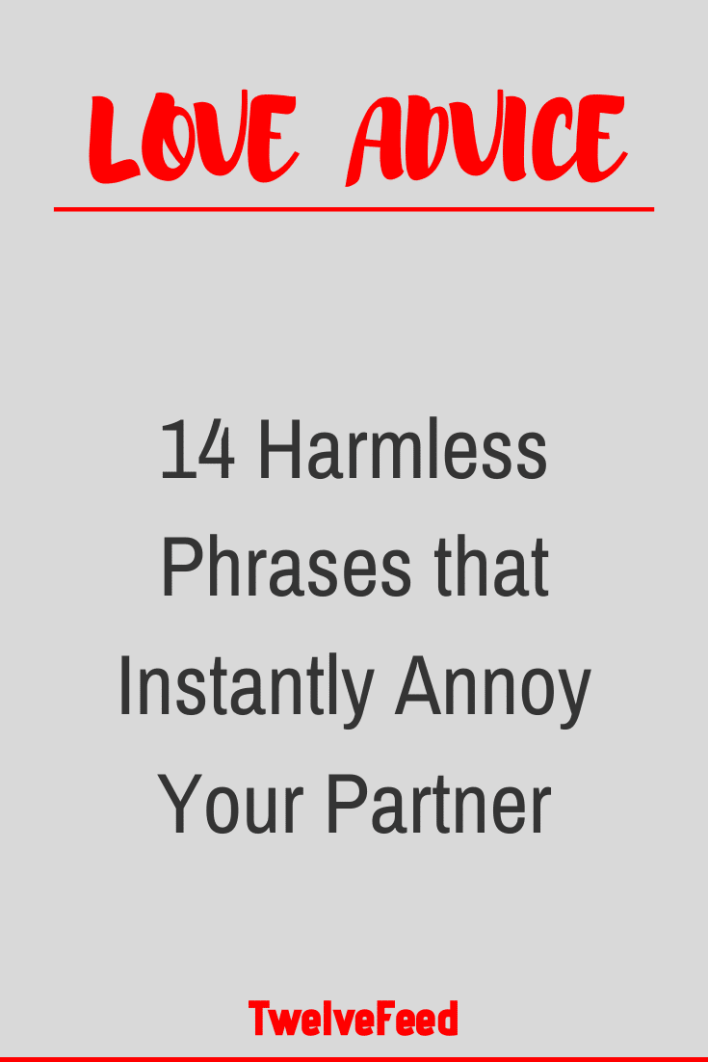 11 Reasons Why Women Find Men in Uniform So Irresistible