When a guy pursues a girl, all he cares about is getting her to fall for him.

He may be in love with her, he may be infatuated by her, or he may just be trying to get into her pants.

It doesn’t matter what his intentions are.

But he’d say just about anything to get the girl he likes to fall for him!

[Read: How guys fall in love with a girl – The 7 stages of love for men]

So how can you ever tell if a guy truly loves you, or is just saying that to get you to fall in love with him or get into bed with him?

Unfortunately, there is no clear and easy way to know if a guy truly means it or is just saying that he loves you to flatter you or get into your panties.

But there are a few clear cues and signs he’d give away that can help you see through his words and find out if he truly loves you.

Firstly, the easiest way to know he means it when he says he loves you is by keeping his sexual innuendos in mind.

Does he try to slip his hands into your shorts as he says he loves you? He’s obviously saying it just to flatter you or impress you enough to unbutton your shorts!

The further away his first “I love you” is from the possibility that both of you may end up in bed, the truer his intentions may be. [Read: 25 signs your boyfriend really loves you even if he doesn’t say it out loud]

For a guy, sex is just that. It’s sex. It doesn’t always have to be attached with emotions. On the other hand,  for a girl, sex is almost always entwined with emotions and love. And guys know that.

By promising a girl that he’s in love with her, he’s saying just what the girl wants to hear, he’s mixing sexual pleasure with the promise of emotional attachment. And when a guy does that, a girl almost always feels obligated to give in and indulge the guy’s sexual desires because “he truly loves her!” [Read: Are you falling for the just-the-tip sex excuse?]

For a guy, it’s easy to say a few words, especially if the reward for it is sex. You’re happy, he’s happy. And everyone gets what they want, don’t they?

The 3 circumstances when a guy would say “I love you”

When a guy dates you, there are just three possibilities when he would say that he loves you. Even if there are any other smaller reasons, they can still be summarized in these three circumstances.

#1 He wants to get into your panties. He wants to have sex with you, and he knows you’ll indulge him only if he makes some kind of a commitment first.

#2 He’s trapped into saying it. He may really like you a lot, but he’s still confused about whether he’s truly in love with you. But he says those three words because you’re forcing him into saying it *by saying you love him and waiting for him to say it back*, or worse, he feels obligated to say it because he assumes that’s what you want to hear. [Read: 10 reasons why saying “I love you” too soon sucks for the relationship]

#3 He really does love you. He really loves you, and he means it completely when he says those three words. He could say it on the very first date or a few months down the dating lane, but he still means it with all his heart and sees you as a long term lover in his life.

Using his behavior to find out if he loves you

As a girl, you’re entitled to be cautious when a guy says he loves you. After all, what if he’s just lying and breaks your heart someday. But you need to remember that not all guys say those three loving words just to get into your panties.

It’s easier to judge his intentions depending on the kind of relationship both of you have. Actions always speak louder than words. How does he behave when he’s around you?

Is he keen to introduce you to his friends? Do you catch him staring at you when he thinks you’re not looking? Does he seem mesmerized by you? And most importantly, does he try to constantly impress you and woo you? [Read: Does he really love me? – 20 signs to know the answer instantly!]

If you’re in a new relationship and your boyfriend tells you that he loves you, keep an eye on these 14 signs here. In all probability, these signs will help you find out if he really means it, or is just saying it because that’s what you want you hear from him.

#1 He says it first. There’s no pressure or need to say that he loves you, but he still says it when you least expect it *and he doesn’t expect sex in return*. He’s not forced into it and you haven’t asked him a question like “do you love me?” He says it because he means it. [Read: When is it the perfect time to say ‘I love you’ for the first time]

#3 He squeezes you. Does your boyfriend squeeze your fingers or your arm when he says he loves you? When you really care about someone and love them, you can’t help but want to wrap them really tightly in your arms.

#4 The long kiss. He says he loves you after kissing you passionately, and then he comes closer again and continues to kiss you for several more seconds. [Read: How to kiss a guy and turn him on with your passion]

#5 He holds your hands. When you’re sitting next to him, has he held your hands gently and played with your fingers or stroked them while saying “I love you”? He may be feeling awkward or shy to say it, but his overwhelming emotions may force him to pour his heart out to you.

#6 The cozy hug. He hugs you affectionately, and kisses your neck while saying how much he loves you. Hugs, cuddles and kisses always make us weak and we can’t help but say the things we really want to say.

#7 When you least expect it. A guy who’s trying to sleep with you would say that he loves you when he thinks you’re expecting to hear it. But if a guy truly loves you, he’d say it not just when he thinks you want to hear it, but even in moments when you least expect him to say it. [Read: 25 qualities in a guy that make him a really great boyfriend]

#8 He sounds serious. The tone of his voice would reveal just how serious he is. He looks you into your eyes, and tells you matter-of-factly that he loves you. He’s not saying it to get something back in return, he’s saying it with the sole intention of letting you know that he really loves you.

When he’s confessing his feelings for you, he’d appear almost weak and he’d talk slowly, and say “I love you” almost in a whisper like he’s telling you a big secret that he keeps close to his heart. He may even seem like he’s overcome with emotions because he’d want you to understand just how much he means what he’s saying. [Read: 18 ways to decode his body language and find out if he loves you]

#10 Close proximity. A guy who loves you can’t hold his loving words back when both of you are all alone and sitting really close to each other. He’d want to cuddle you or kiss you, but most urgently, he’d want to tell you just how much you mean to him.

#11 When he does something special. When a guy who loves you gifts you something special to show his feelings for you, his gift will almost always be accompanied with an “I love you”. It’s his way of showing his appreciation for you *by giving the gift* and revealing his feelings at the same time.

After all, in that heated moment, all he wants to do is reinforce just how much you mean to him and how much it hurts him to see you with someone else. [Read: How to make your guy jealous and get his attention]

#13 He talks about the future. If he says something serious about your relationship or talks about the future together, and says that he loves you in the same sentence, that’s a good sign that he means it. He sees you in his future and that thought makes him realize just how special you are to him. [Read: 25 compliments for guys they’ll never ever forget!]

#14 Your intuition. This is as simple as it gets. Your guy may not reveal all these signs here, or it may be too early in the relationship to know if he really loves you for sure. But the easiest way to trust a guy when he says “I love you” is by following your instincts.

If you really think he means it, there’s a good chance he probably does. After all, what better way than to trust your instincts when you fall in love with someone!

Use these 14 signs to find out if your guy really means it when he says “I love you”. Even if you can’t see all these signs when he says he loves you, you’d surely see more than a handful. And that’s a great start to know if you mean something special to him, don’t you think? 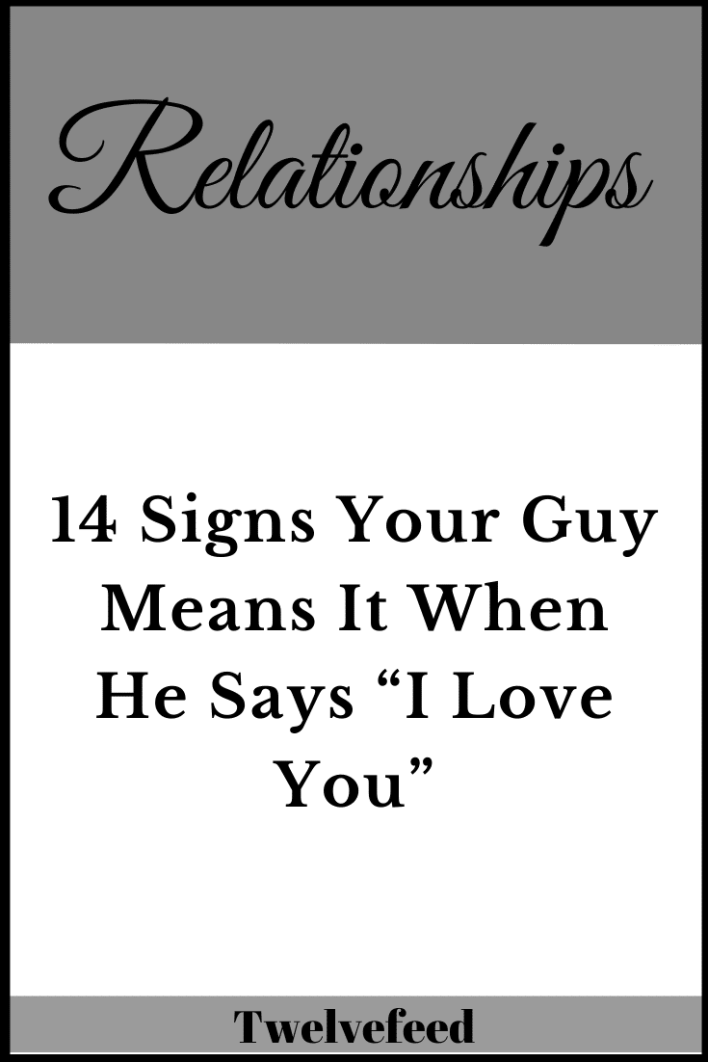 This Is What Each Zodiac Element Absolutely Believes In