Do you ever wonder if your girlfriend’s still in love with her ex?

Do you catch her staring at an old picture of her ex when she thinks you aren’t looking?

It’s not always easy to decipher the thoughts that run on a girl’s mind.

They’re pretty secretive, especially when it comes to exes and residual feelings of love.

But if you ever do get a nagging thought at the back of your mind, and wonder if your girlfriend’s not over her ex yet, chances are, you’re probably right!

[Read: How to deal with your girlfriend’s annoying ex boyfriend]

Is your girlfriend still in love with her ex boyfriend?

And you won’t always notice the signs immediately if your girl is still lost in thoughts about her ex.

Sometimes, you may just find her being distant and aloof.

Or she may want a lot of space to herself.

She may appear sad and bored when she’s with you, and even keep her distance from you now and then.

But shockingly, she may be normal or even happy around her friends!

[Read: 10 signs your girlfriend’s past relationship is holding both of you back]

And at other times, she may get really annoyed with you if you drop by unannounced, especially when she’s meeting her old friends, and that includes her ex.

Should you put up with it?

If your girlfriend’s only recently broken up with her boyfriend, it’s pretty obvious she’s still going to miss him or think of him now and then. But there’s a very thin line between missing an ex on memory lane, and missing an ex and pining over him. [Read: 15 signs you’re in a rebound relationship and don’t even know it!]

If you believe your girlfriend is still smitten by her ex or is having second thoughts about getting back with him, talk about it with your girlfriend. You don’t need to ask her if she still misses her ex *that would just make things weird*. And even if you do ask her something like that straight out, she’d deny it outright.

Instead, communicate with her. Tell her that you believe she’s been distant for a while, and ask her if there’s something you could do to help her because her behavior is not helping the relationship, and it’s not helping you trust her blindly because you’re confused by her recent indifference. [Read: The perfect way to get over trust issues in a relationship]

But on a personal note, if your girlfriend is stuck in a shoddy love triangle inside her head, it’s not going to end well, at least for you! [Read: Love triangles and the confusing complications it can bring]

14 subtle signs your girlfriend is not over her ex yet!

If the thought of your girlfriend wanting her ex nags you, use these 14 signs your girlfriend isn’t over her ex to decipher her thoughts. It’ll definitely help you understand her mind better.

#1 She’s distant and confused. Your girlfriend gets distant and aloof now and then, and even if you ask her what’s wrong, she tells you it’s nothing, or tells you that it’s something she has to deal with herself.

And at some point around the time you have this conversation where she tells you she’s confused, she talks about her ex highlighting something positive about him in the same sentence!

#2 She’s excited. Your girlfriend gets excited and jumpy as soon as she accidentally meets her ex or bumps into him. She can’t stop talking about him even after he says goodbye and walks away. And if you sneakily stare at her from the corner of your eye, you may even see her smiling to herself.

And if you weren’t around her when she bumps into her ex, and she tells you about it over the phone, you may notice that she’s more excited and alive than she normally is. [Read: Real reasons why girls are so fickle in love]

#3 Those good old memories. Your girlfriend talks about her ex boyfriend’s memories like they’re still fresh in her head. She remembers him fondly, and speaks of him as if he was her best friend. “That guy, gosh, he was such a dick, he would make me laugh so much!!”

Somehow, your girlfriend calling her ex a dick doesn’t feel so reassuring right now, does it, especially when she grins and loses herself in a reverie after saying something mean *in a nice way* about him?

#4 She compares all the time. Does your girlfriend ever compare you to her ex boyfriend, and show you in negative light? Of course, she may do this only when she’s pissed off with you. But yet, if your girlfriend compares you to her ex for the silliest reasons, or when you’re late or forget to do something, it only means she’s mentally evaluating who’s the better boyfriend.

But seriously, if she has no thoughts of ever dumping you and getting back with her ex, why the comparisons in the first place, right?!

#5 She’s in touch with him. Exes stay as exes for a reason. And exes never make good friends. Of course, it is definitely possible for exes to stay friends, but it’s not likely. If your girlfriend is still friends with her ex, and stays connected to him in a more than just an old friend kind of way, you do have grounds to worry. And you’re definitely allowed to go into panic mode if she chats with him over Facebook every day or texts him often. [Read: Can exes ever turn into friends after a break up?]

#6 She still remembers the events. When a relationship breaks down and the ex lovers go their separate ways, one of the first things they need to do is erase their love slates clean. But if your girlfriend still remembers *their song* and hums nostalgically, or points out every single place she and her ex used to hang out at, each time both of you pass by it, it only means she’s still hanging on to the thoughts of her ex and keeping it alive. For what? Well, you know…

#7 She gets irritated. Your girlfriend’s supposedly in a relationship with you, and supposedly, she’s happy with you. But does she get irritated or annoyed when she hears that her ex is dating some other girl? She may not tell it to your face, but if you read her expressions, she may seem distracted or angry, or she may get unnaturally quiet all of a sudden.

#8 You’re the rebound guy! Your girlfriend may be using you as a rebound guy, either to get over her ex or to make him jealous. This is something that happens frequently when two good friends starts dating each other.

You’ve been in love with her for several years, watched her being traded from one guy to another, and never had the package to ask her out. And finally, she realizes you’re such a sweet guy and starts dating you *probably because no one else asked her out in time!* And now she’s bored of you already, because you behave more like a friend than a boyfriend. [Read: 15 reasons why nice guys finish last all the time!]

If she constantly asks about her ex and what he’s been up to, or if her eyes light up and she talks excitedly about him with her friends, sorry, but she still has the hots for him!

#10 She intentionally bumps into him *accidentally*. And you know it! Has your girlfriend ever asked you to take her to a particular place even though you have other plans, and then accidentally bumped into her ex?

If your girlfriend gets really excited to go to a reunion, or if she insists that you don’t tag along with her even when you know she’d bump into her ex, it may be a sign that she’s still not over her ex and wants to catch up with him. Without you.

#11 She wants to be his friend. Your girlfriend and her ex boyfriend have broken up, and they’ve moved on too. And now, all of a sudden, she confesses to you that she wants to be friends with her ex because she’s finally over him and doesn’t think of him in that way anymore. [Read: 12 reasons why your girlfriend needs to follow the no contact rule]

#12 She loves you. And thinks of him. Your girlfriend tells you she loves you, but she also mentions that she thinks of her ex now and then. If your girlfriend ever says this to you, that’s probably because you’re being a doormat and letting her walk all over you. You’re probably a really nice guy, but the fact that she can tell you something like this just shows how easy she’s taking this relationship with you.

#13 He tries to get in touch with her. And surprisingly, she doesn’t want to be rude to him and avoid him! Instead, she pretends like she’s a cute, helpless thing who can’t break her ex’s heart and stays in touch with him. *even if that means she’d have to break your heart* [Read: 16 signs your girlfriend’s ex wants her back in his life]

#14 She’s moody. Your girlfriend gets distant from you each time she meets her ex. She smiles to herself or spends time by herself, and wants her space. She’s still in touch with her ex, and talks to him often. Think about it, an ex boyfriend who’s still single… and a girlfriend who gets moody and distant each time her ex calls… something smells fishy, don’t you think?

Is it time to break up with your girlfriend?

There’s a threshold up to which you can bear her antics and her sickeningly fond reminders of her ex. And this threshold is different for each guy. If your girlfriend pines about her ex often, or gives you any reason to doubt her, talk to her about it.

Tell her calmly that her close bond with her ex boyfriend is pushing both of you apart. And if she really wants the relationship to work out with you, she needs to get her priorities right. [Read: 25 truthful reasons why girls cheat on their boyfriends]

After all, an ex lover is called that for a reason, because it’s the past. But if she still chooses to stay *friends* with her ex, it’s pretty obvious that she’s choosing him over you.

[Read: 15 signs she’s leading you on and taking you nowhere!]

Use these 14 signs your girlfriend is not over her ex to decipher the thoughts in her mind. And once you do figure out if she’s still in love with her ex, talk to her. And the conclusion to that conversation, well, that would decide the future of your relationship with her! 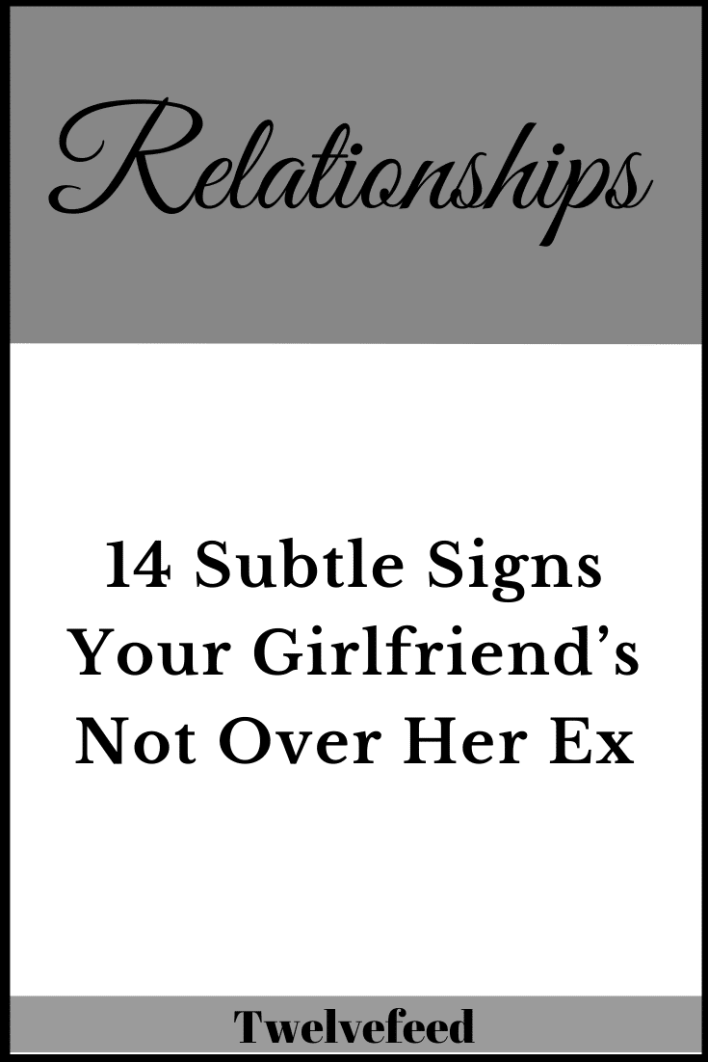 15 Sweet Ways to Make a Guy Feel Needed and Wanted

15 Signs She’s Leading You On and Taking You Nowhere!