One of the hardest things about being a girlfriend is seeing your man going through tough times. It hurts you that you’re willing to do everything just to make him feel better. Sometimes, it gets harder if he refuses any kind of help or if he insists that he’s not stressed at all.  However, that shouldn’t stop you from trying to help him. He needs you now more than ever, so be there for him.

Here are some helpful tips on how to comfort your boyfriend when he is stressed:

1. Give him a hug.
He may be stressed right now, but remember that you’re his home. Give him that long and tight hug that he needs. Give him that slow and soft kiss to remind him that he’s not alone and that you’re just there for him. Simple gestures like these will surely help ease whatever burden he’s carrying now.

3. Cook his favorite food.
Food is always one of the most effective ways to de-stress, so make sure that your man has eaten enough. Try to cook his favorite food. Don’t worry about messing it up. It may not have its perfect taste, but your little efforts will surely put a smile on his face.

4. Let him vent.
Encourage your boyfriend to express his frustrations at work, at school, or at life in general. Once he does, make sure that you don’t take his rants personally. Remember that the last thing he wants while he is stressed is you picking a fight with him. So, just give him the time that he needs to let it all out and get better.

5. Listen to him.
You do not just let him vent; you also have to listen to him. Pay attention to every word he says. Make him feel that his thoughts matter. Put yourself in his shoe for you to understand the reasons why he’s upset. Recall those times that he patiently listened to your own rants. Now is your time to give back and listen to him.

6. Be his best friend.
There’s nothing more beautiful than having a girlfriend who is also your best friend, so be both. Give him some pieces of advice. Cheer him up with your words of encouragement. Tell him how much you appreciate the work that he does. Remind him of the things that he is capable of doing. If he feels like going out for a drink, accompany him. Look for ways that can divert his attention.

7. Ask him what else you can do.
Even though you know your boyfriend well, it’s still best not to assume that you know everything he needs. Ask him if there’s anything else you can do. He might say he doesn’t need anything, but what matters is you’ve tried to support him during dark times and he will thank you later.

9. Stay positive for him.
He’s already stressed, so you wouldn’t want to further attract negativity. Rather, spread positive vibes. Remind him how lucky he is to enjoy the things that he has right now. Remind him of his goals or your goals together. Let him see the good things in life despite all the challenges you two are facing.

ALSO READ: 10 Ways to Deal with Stress in Your Relationship

10. Use your sense of humor.
It may not be a good time to throw some jokes on him, but find a way to lighten up his mood. Share a funny story. Find a right time to still throw those silly jokes on him. Create impressions of his favorite icons. Make funny faces. He may or may not laugh, but he will surely appreciate it, knowing that you’re making some effort to comfort him.

11. Throw a surprise.
Surprises don’t always have to be grand; it’s still the thought that counts. So, leave some notes about how he still looks good even when he’s stressed. Take him to his favorite comic bookstore.  Let him pick the movie that he wants to watch. Give him a reason to smile.

12. Give him space if necessary.
Sometimes, when you have too much on your plate, all you want from people is to just leave you alone. So, if you feel like your boyfriend needs a little space, give him that. It may help him figure things out and gather himself together. Of course, be there when he’s already willing to open up to you.

13. Suggest performing physical activities.
In order to release his stress, get him involved in doing some form of exercise. Invite him to go jogging with you. Go to the gym together. If not, you can just do some stretching in the house and enjoy your quality time together. Any physical activity will surely make him feel refreshed.

14. Encourage him to go out with his family/friends.
He may not want others to know he’s stressed, but just try to encourage him to talk to his family or friends.  Let him hang out with them. If he doesn’t want to, then maybe a friend can visit him in the house. Your boyfriend has to know that he is well-loved.

It is indeed painful to see your man in bad shape. However, remember that it is through these trying times that your relationship gets stronger. Now is your time to show how much you love him, so be your man’s pillar of support. Be a little more patient. Be his friend and his partner. 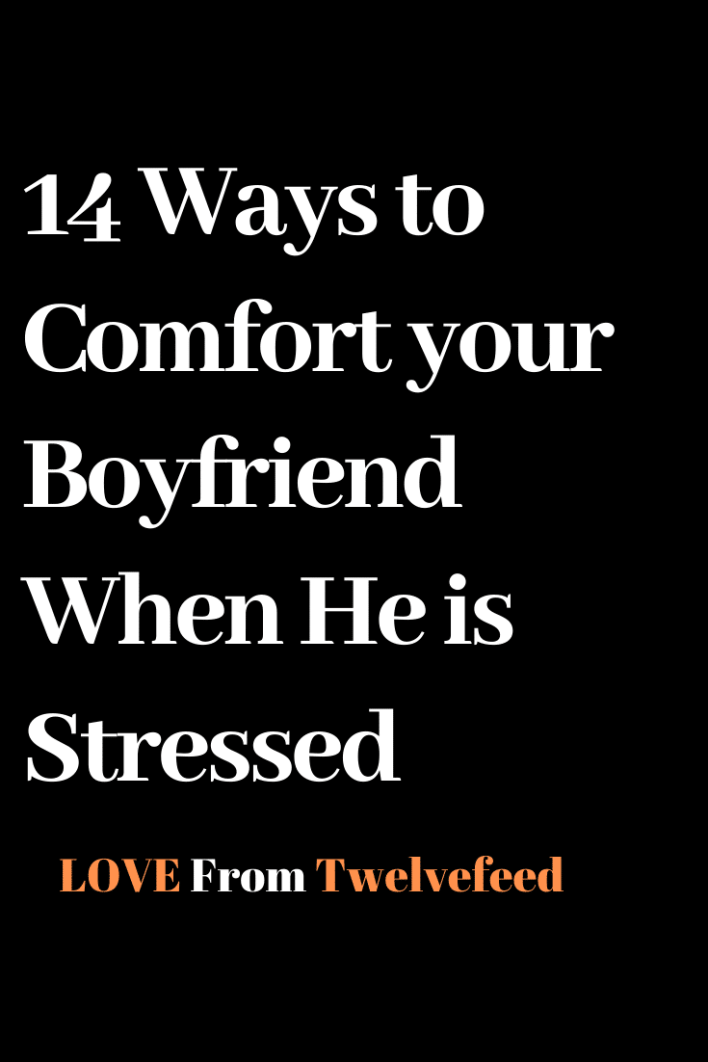 11 Proven Ways to Have a Serious and Long-Term Relationship

How to Comfort Your Girlfriend When She is Stressed