Catching and keeping a guy’s attention is no easy task. With so many distractions in the world today, whether it’s through the media or just other people in general, getting a guy to go crazy over you can be tough! You never know what they’re looking for or what may be interesting to them.

Men are very simple creatures, and although they have many complex qualities, what they find attractive in women is the one similarity that all men seem to share. Don’t get me wrong, I’m not talking about physical appearances, because that differs between each man. I’m talking about the qualities that make him stop in his tracks and think, “Wow. She is an incredible person!”

How to make a guy go crazy over you

This isn’t to say that every single one of these will work on all men, because as I said before, everybody is different. But with these, you’ll not only get their attention, but you’ll get them to keep thinking about you all the time. [Read: 12 things beyond appearances that drive a man crazy]

#1 Be yourself. Yeah, yeah, I know. Don’t roll your eyes at this just because it may seem cheesy and you hear it all the time. But have you ever thought about why it’s an overly common suggestion when it comes to dating someone new?

Because it’s true, duh! Being yourself is the single best thing you can do to make a guy go crazy over you. You have to show these guys exactly who you are at the core, and believe me, the right ones will go absolutely nuts for you! Not only that, but you will also only attract the guys who truly like you for who you are.

Don’t go trying to change who you are just because you think they’ll like you better a certain way. Truth is, they can tell. Men may be simple, but they’re not stupid. [Read: The real reason why inner beauty is way more important than outer beauty]

#2 Be confident. Yeah, I know, this one is fairly common, too. But I promise it’s only because it’s a surefire way to make a guy go crazy over you. Confidence is sexy! It means that you know who you are and you want the world to know it – and men love this! Leave all your insecurities out the window if you truly want a guy to like you.

#3 Respect yourself. Nothing is more unattractive than someone who has no respect for themselves. Men think so as well. If you’re in a constant state of disrespecting yourself, how can a man expect you to know anything about respecting others? Having self-respect will surely make his gaze stick to yours.

#4 Make your standards known. If you’re out with a guy who wants to head back up to your place, but that’s just not how you roll on the first, second, or even third date, then let him know! If you expect him to be respectful and not go parading around with 10 other women while you two are still in the “dating” phase, then make it known. By setting standards and voicing them, he will be in awe that you not only have so much self-respect, but that you are willing to make sure he’s on board before furthering anything. [Read: How self respect affects you and the relationships you have]

#5 Be kind. When men first meet someone, their first impression – and many impressions after that, even – really determine how they see someone. Being kind is a great way to make a guy take extra interest in you. If you’re kind to him and others around you, then he can safely assume you’re nice in general, and men go googly-eyes for a truly kind person.

#6 Be demanding. This doesn’t mean bossy! Please don’t make that mistake. While some men may like the bossy attitude, it wears thin after a while. Be demanding in the way that shows him you can be in charge. Sometimes, men feel like they’re the ones that need to be in charge all of the time, and it’s a sexy relief when they can sit back and let a woman do it for a change! [Read: The LovePanky dating girl code all girls need to know]

#7 Take care of yourself. I’m not saying that you have to look like a Victoria’s Secret model. I’m saying that you should keep yourself in shape. Exercising, eating well, and having proper hygiene are traits that every man finds attractive. Why? Because it means that you’re willing to put in the work to not only be healthy, but also to look/smell good for him on a regular basis.

If you take care of yourself, you probably also have a higher sense of responsibility – something irresistible to men for a number of reasons. [Read: 13 physical attraction tips to look way hotter instantly]

#8 Be subtle. Don’t try too hard to make him like you. Be subtle with your compliments and your actions towards him. Doing subtle things here and there to give him the hint is not only sexy, but it will show him that you don’t have to openly shout to the world that you care about him.

#9 Be open. It’s nearly impossible for a man to go crazy over you if he hardly knows you! Open up to him. Now, don’t go spilling your guts out to the poor man. He doesn’t care that you got pushed down the slide by a bully in second grade and cried about it for a week.

Tell him your goals, your hopes, and your dreams. Share with him your views on certain controversial issues. Letting him see the real you, and the fact that you have your own opinions, goals, and desires will make him see you in a whole new light! Trust me. [Read: How to make your boyfriend want you more than ever]

#10 Be spontaneous. Randomly show up at his place with pizza, wings, and beer. He will not only appreciate this greatly, but he will go absolutely nuts over you. Being too predictable all of the time can be very boring, and he will get sick of you very quickly. Continuously surprising him will always keep him on his toes and wondering what you’ll do next!

#11 Be busy! Have your own life! Surprisingly, men find someone who is busy doing their own thing to be extremely attractive. It means that you don’t need someone else to plan your life around. Having your own hobbies, events, and activities that you’re always engaged in will make him bide his time for when you’re free. [Read: The secret guide to attracting men in a way they can’t resist!]

#12 Don’t be high maintenance. If there’s one thing that all men hate, it’s a woman who takes an hour just to do her makeup. That doesn’t count shower time, hair time, and the time it takes her to get dressed. I don’t just mean this in the physical sense either. Don’t be needy! Men dislike women who constantly need to be texted, called, and checked up on. If you’re busy having your own life in the first place, you shouldn’t need to be in constant communication with them.

#13 Be accepting. If you really want a guy to go crazy over you, then you need to accept them as a whole. When a man feels like he can really be himself around you without having to hide anything at all, then he’ll feel like he hit the jackpot!

#14 Be supportive. Even if he wants to build a cardboard airplane and take it off the biggest ramp there is, you better be right by his side cheering him on! Just maybe make sure he wears a helmet. Men who feel supported feel like they can do anything, and if you’re the one providing that support, he will go even crazier over you. [Read: 25 easy ways to make your guy feel appreciated and cared for]

#15 Have your own ambitions. If your plan is to move to Europe, write a novel, become a best-seller, turn it into a movie, and live your life that way, then don’t give up on that just because you met someone who would rather stay in a small town and become a farmer. Now, it may seem that your futures are kind of misaligned, but believe me when I say he will find your driven attitude ridiculously attractive. And who knows? Maybe he’s secretly always wanted to live in Europe. 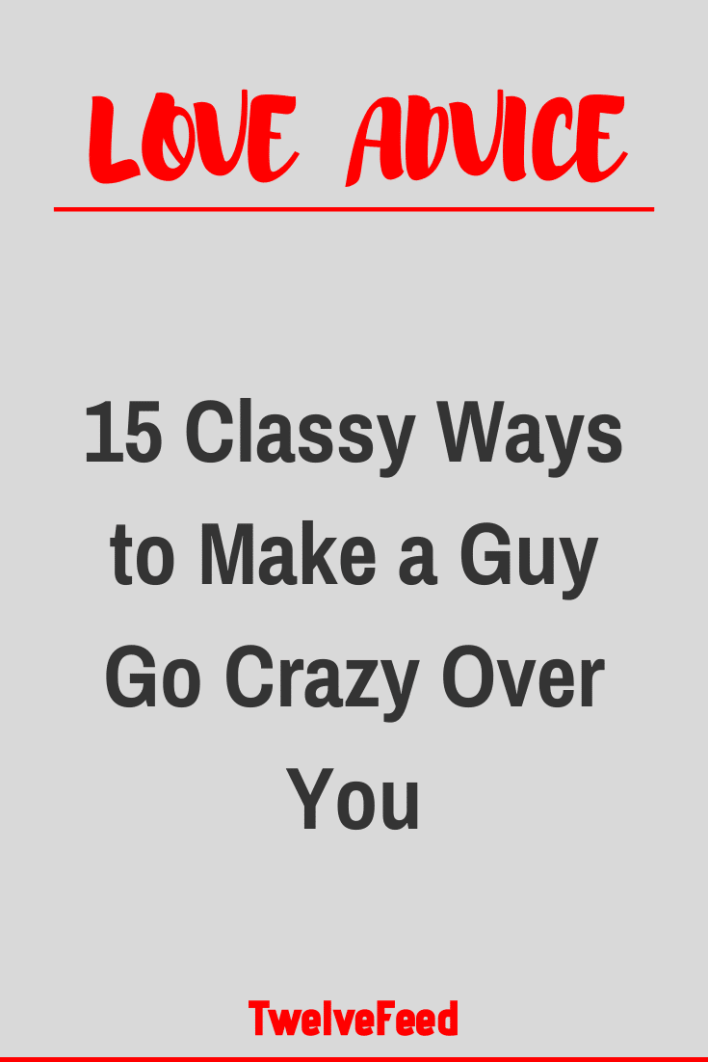 6 Reasons Why You Shouldn’t Date a Low Maintenance Girl