Let’s be honest—we live in a fast-paced world, filled with people who come and go as if they’re on a schedule. And dating can be a real pain, leaving you feeling like a train station. It’s no surprise that you’re wondering whether the latest guy actually wants anything serious at all.

It’s easy to become jaded in such a situation. However, if you put down the cynicism for just a second, you’ll realize that the signs are blatantly clear. When a man wants a real relationship, he’ll put in way more effort than those just looking to hook up.

He’ll make it known by being attentive and thoughtful. He’ll respect your pace, get to know you, and offer a shoulder to cry on if needed. Men just looking to feel good for a night or two won’t take the time to do much more than they have to, because they’re not staying around.

So how can you really tell if a guy is a keeper?

It might be difficult to see the signals after twenty bad dates and a month of having no one call you back, but some guys will show you they’re really interested in a relationship and the signs will be there for you to see. Let’s have a look at some of the most common ones.

#1 Good face first: He’ll be a gentleman. He’ll hold doors open, buy you drinks and food, and match his pace to yours out in public. When a man’s truly interested, he understands that he needs to treat you like a lady in order to stay in your good graces. [Read: 12 things you need to look for in a guy before you start dating him]

#2 He’s made the introductions: You’ve met his family and friends. If a man considers you nothing more than a brief hookup, he won’t introduce you to anyone he doesn’t have to. Meanwhile, if a man is inviting you for some quality time with his family, friends, or both, then he wants them all to meet you because he sees you hanging around. He should be filling you in on inside jokes, funny memories, and people’s names and connections. He’ll try his hardest to make you feel included, and to get his loved ones to like you too.

#3 He’s known in your circle: He’s met your family and friends. If he’s serious, he’ll understand his loved ones aren’t the only important people to get involved with. He’s going to want to meet your friends and family too, and he’ll try his best to get them to like him. He may offer jokes, background information about himself and his ties to you, and listen intently to what they have to say.

#4 There’s a level of understanding: You’ve bonded over common ground, and established a connection. No one wants to date, or even be friends with, someone they have absolutely nothing in common with. A guy looking to get serious will find that common ground, and use it as a stepping-stone to establish a more meaningful connection with you. If he’s looking for a hookup, he won’t care if you don’t share anything to talk about, or have anything to do together. [Read: 10 signs he’s faking love just to sleep with you]

#5 The past isn’t hidden: He’s told you about his past, and understands yours. You’ve discussed exes, past flirts and flings, as well as regrettable choices, your childhoods, friendships gone wrong, and more. He’s getting to know you, and that means he’s interested. Men don’t take the time to get to know a girl on a personal level like this unless they’re truly serious.

#6 Attention: He’ll actually make eye contact, ask questions, and retain information. If the guy seems like he’s hanging on your every word, he’s smitten. If he’s on his phone, blows you off, keeps asking you to repeat something, or completely overrides the conversation by bringing something else up, then he just doesn’t care.

#7 Only girl in the world: Other than family and lifelong friends, there are no other girls hanging around. When people are single, there may or may not be a few random flirty situations at hand. However, when men find themselves really liking one specific girl, all the other girls are lost in oblivion. If he’s put an end to flirting with other girls, or flat out ignores them, then he means business. [Read: Does he really love you? – 20 sure signs to read his mind]

#8 Intrigued: He’ll ask deeper questions, not just surface ones. Rather than just asking what you do for a living, he may ask what you like about your job, and where you see yourself in the next five years. If he digs deeper, then he’s not in it for a brief experience, and he’s not interested in the easy conversations.

#9 Respect: He’ll appreciate and respect your advice, opinions, and overall help. If the guy asks you for advice, and at least takes it into consideration, then he cares about what you have to say. He values your opinion, and he cares about what you think about him. A guy who’s just looking to hook up won’t let you in on his problems, because you mean nothing to him.

#10 Contact: Even if he hates texting, he’ll text, call, or use social media to get hold of you. These days, there are a ton of ways to get in touch with people, whether it be Snapchat, Twitter, Instagram, or simple texting and calling. If he’s not into the texting thing, or social media, then he should still be reaching out to you in a way that is comfortable for him. But there’s one key thing to remember here: A serious guy won’t reach out to you just for s++, he’ll actually reach out to you to talk. [Read: Is he a player or a gentleman – 13 clear giveaways]

#11 A shoulder to cry on: He’s the one to pick you up when you need a hand. Unreliable guys that aren’t there when you need them are abundant. When a man is actually there for you, and is reachable, approachable, and willing to offer a listening ear, then you should know that you are special to him.

#12 There’s a level of shyness: He is a little intimidated. This shows he cares what you think, and he’s letting you run the show. It’s a red flag when a man is overly confident, coming off as cocky. Meanwhile, if he’s a little shy around you, but still shows interest in case you really do agree to go on a date with him, then there’s something real there. He’s taking a chance, and he’s fully aware that the decision, and his fate, is in your hands. [Read: 14 signs he genuinely loves spending time with you]

#13 You share real dates: He’s not afraid of being seen with you. No, not Netflix and chill; you go to public places, show affection, and he states his intention to take you out again. Chilling out and doing nothing together is acceptable once you’re actually dating, because there’s no constant pressure to go out on dates every single day. You can relax but still focus on having fun and sharing quality time together. But until then, there shouldn’t be Netflix and chill. A serious guy will actually take you out on the town, and make it clear he wants to do it again.

#14 Serious talk: You’ve spoken about goals, dreams, and aspirations. Talking about your goals and dreams is something you do with close people only, like family, friends, and partners. If he’s asking you about these things, and telling you his, then he doesn’t want to be a passing thought in your mind; he wants a permanent spot. [Read: 10 signs the two of you are going from “dating” to “in a relationship”]

#15 The biggest sign: He won’t rush you with anything. He’ll let you set the pace. This is the biggest sign, because most of the time, men who aren’t looking to get into a serious relationship will be overly eager to lead the conversation to s++. They’ll ask questions about what you’re willing to do, where you draw the line, and then eventually, they’ll try to s++t you, if not come onto you in person. A serious guy won’t do any of this, because he’ll want you to feel comfortable. He will prefer to wait for the right time, till you’re ready, to let the magic happen.

Dating is hard for everyone. Constantly having to pick up on signs, figure feelings out, and think of the next steps can become a trial after a while. However, when a man wants a serious relationship with you, things get much simpler. The signs become obvious, and you should begin to feel respected and appreciated. There will be a level of common ground, communication, and honesty that you just won’t have with a hookup. 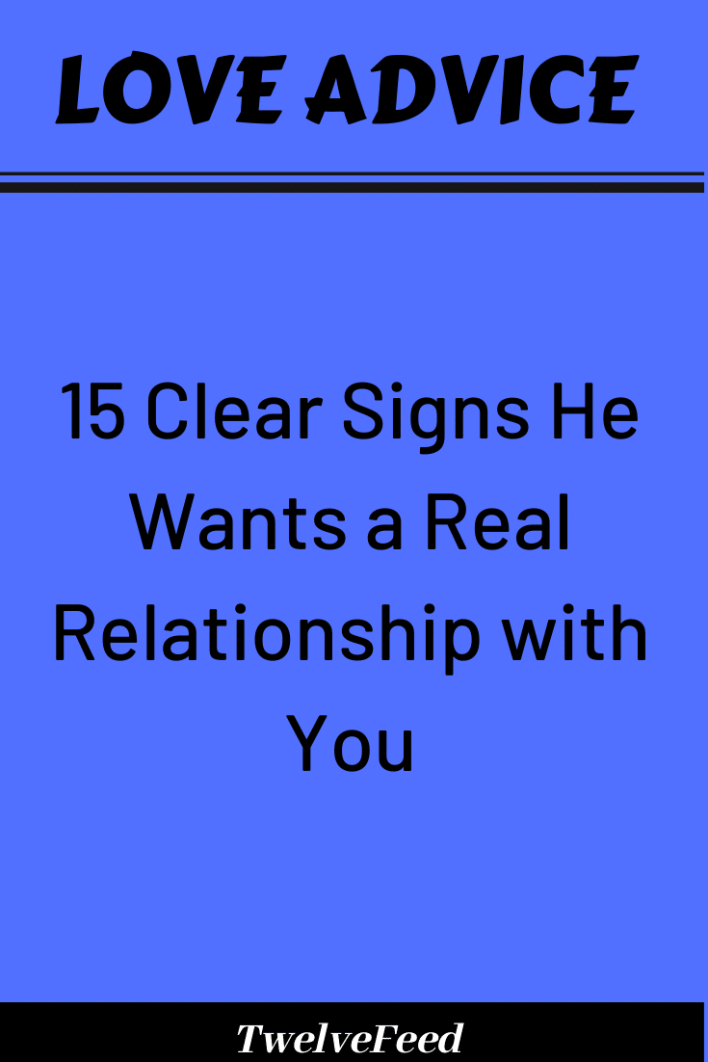 20 Things Happy Couples Don’t Do in a Perfect Relationship

10 Sure Signs You’ve Got the Fear of Commitment!