Boys will be boys, and oftentimes, that means being a little oblivious to the female sensibility. Unintentional though it may be, men often forget to do the little things that get under a woman’s skin–the things she expects and craves–ruining perfectly happy, healthy relationships. It’s those seemingly tiny things that add up over time, and will make or break your dynamic together.

What are these little things? And why do they matter so much? Because once a woman grows up, and stops dating the wrong kinds of guys, she’ll want someone that can establish and maintain a strong connection. In essence, anyone can get the girl, but not everyone can keep her around. By being a gentleman, and treating her as every woman deserves, you can be the guy other guys envy.

#1 Being attentive. This means holding doors open, giving her a kiss when she asks for one—even if you’re in the middle of something—keeping in contact when you’re not together, etc. Life is busy, and responsibilities pile up, but your relationship should be a high priority.

Something as simple as sending her a text, telling her you miss her is appreciated. If you’re too busy to talk, or dedicate time to her, let her know you’ll make her your main focus as soon as you’re free. It may sound off-handed, but it’s when you ignore her for long periods of time, without letting her know what’s going on, that it really puts a strain on the relationship. [Read: 14 small but very effective ways to make your girl incredibly happy]

#2 Keeping promises—or, if you can’t, not making promises at all. The most annoying thing about a man who makes empty promises is that he comes off as unreliable. In a relationship, partners have to be able to trust each other, and count on one another.

If you keep breaking promises, she will learn to never let you in on what may be going on, because…well, what’s the point? This can lead to serious problems in the relationship, making you seem like you take her for granted, or leading her to feel she could do better. [Read: 15 signs your girlfriend may be feeling taken for granted]

#3 Being open and honest. While men are visual thinkers, women are all about communication. Opening up and telling her about work, your friends and family, or your innermost thoughts and fears will have more of a positive impact than going out and getting her flowers. She knows how difficult it is for you, and the fact that you still find a way to open up means that she’s special to you.

#4 Showing her you two can blow off steam and have fun together. Relationships may take work, but they shouldn’t be all serious, all the time. One of the biggest parts of a relationship is fostering the ability to share and make good memories together. Blowing off the week’s steam, and being silly together will not only provide memories you’ll both cherish, it will bring you closer. Be her partner, and her best friend, and watch as she lets you see all the different sides of her personality. *Read: Have fun*

#5 Having the courage to tell her when there’s something she should know. What most men don’t realize is that women don’t expect men to be perfect. When women nag, oftentimes it’s because their partners didn’t tell them something until much, much later, or they find out another way.

Informing her when something serious happens will show her that even though you’re not perfect, you know how to let her in on the details, and maintain an honest relationship. Even if she’s upset at first, she’ll come around, and you can work things out calmly together.

#6 Being there when times get tough. One of the main reasons, if not the main reason, some women leave their partners for other men is because their partners were never there when they needed them. If you’re not there for her when she needs help, or someone to talk to, someone else will be. That friend you hate, that clearly thinks she’s cute? He’ll be there, not you, so why should you get to keep her? Being there for your girl during the bad times will show her that you’re willing to help, should the need arise. [Read: 18 clear signs your girl may be having an emotional affair with another guy]

#7 Letting both of you wear the pants in the relationship. Being dominating can be sexy, when done correctly. For instance, dominating every aspect of her life isn’t going to work, but dominating her in the bedroom very well might. Keep a balance, and let her take the reins too, because let’s face it: she’s probably better at certain things than you are. Play up each other’s strengths!

#8 Including her in your life as a priority, not an afterthought. A man who only communicates with his woman when it’s convenient for him isn’t taking his relationship seriously. Relationships shouldn’t be self-focused—in fact, they should be the exact opposite. If you’re absent more often than not, both physically and mentally, she will begin to feel neglected. A neglected woman is an unhappy woman, who wants to work problems out with you 24/7.

#9 Being a gentleman. You know those thoughts and comments that you say to her face, that make her feel terrible about herself? That’s the kind of behavior that gets you sent to the curb, along with the rest of the garbage.

Being a gentleman means being considerate of her wants and needs, as well as your own. Treating her like the woman she is, and giving her a sense of independence, while still catering to her when the mood is right, will earn you an enormous amount of respect. Being a gentleman will make her feel like you’re a catch, and she’ll go the extra mile to make you feel like it. [Read: 36 really sweet things your girlfriend would love to do with you]

#10 Being kind to her family and friends—you know, the other important people in her life. When dating a girl, it’s important that her friends and family like you. The last thing you want is people giving her ideas, like telling her to move on, or pointing out your flaws.

If you show them how good you are, they’ll cheer for you, and maybe even take your side. Furthermore, showing her you like them will tell your partner how much you actually care about her. Form bonds, integrate these people into your life together, and you’ll see how much fun it is seeing her united with everyone she loves, including you.

#11 Practicing those listening skills. Men dread the thought of having lengthy conversations, or of hearing their women talk for long periods of time. What you don’t know is that when she tells you things, it is either to vent or get your opinion. Your opinion matters to her, and this is her way of letting you know that you’re important.

Don’t be afraid to speak your mind about the topic at hand, but make sure you listen, primarily. Having a listening ear can be a bit tedious, but she’ll take notice, and may even reward you with a special date night. [Read: 8 phrases your girlfriend would love to hear more often]

#12 Letting her see you enjoy your hobbies. It’s sexy when men have passions they genuinely strive for. If you have hobbies like model building, playing the guitar, playing video games, photography, or graphic design, let her see you in action! Show off your skills, and prove that there’s more to you than meets the eye. Not only will she see how talented you are, she’ll boast about you, and boost your ego. Impressing your girl should always be a priority.

#13 Integrating her into your family and friend dynamic. Much like you should form bonds with her loved ones, you should encourage her to do the same with yours. Sure, you can still have guys’ nights, but don’t be afraid to bring her around every now and then.

Otherwise, she’ll start to feel like you lead two separate lives, and question what it is you do behind her back. Bringing her around family and friends will show them you’re serious, and they’ll want to get to know her and include her in plans, to make her feel accepted. If you want her to be a part of your life, make her one! [Read: 23 foolproof relationship advice and tips for men]

#14 Affection, affection, affection! Gentlemen can cop a feel too-they’re even encouraged! If you have a special lady, show her how sexy you think she is by grabbing her legs, or giving her butt a tap or two. It’s not a vulgar move, unless you’re not actually dating. Doing this will definitely make you happy, but it will also give her a sense of reassurance, knowing that you think she’s hot. [Read: 11 small ways to make a woman feel sexy and desirable]

#15 Reciprocating in the bedroom. Certainly not least, make sure that when you’re getting it on, it isn’t all about you. If you spend more than half the time getting attended to, you need to make it up to her right away. Not just time, but content. Say she’s going down on you, and then rides you. Don’t just lie there and take it, make sure to flip her over too—once it’s been a little while, of course. Do the things you know she enjoys, and watch as she has the time of her life. 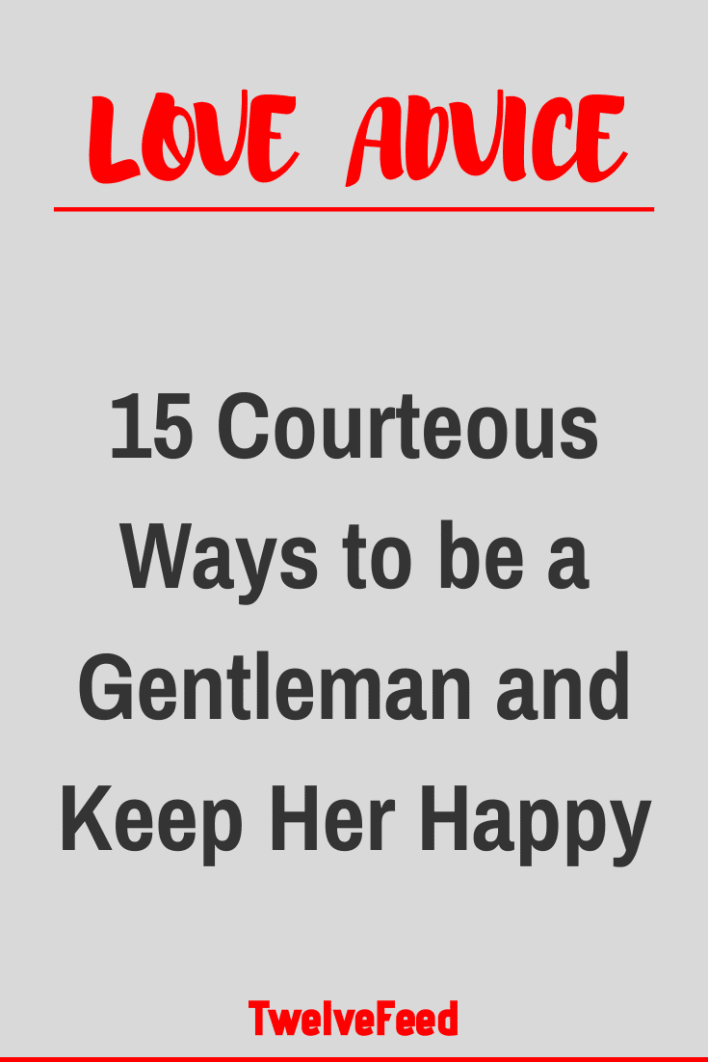 13 Strong Signs Your Relationship Is Built To Last

Dating an Artist: 10 Pros and Cons to Make Up Your Mind