Commitment is a scary thing for a lot of people. The dynamics between people who want to engage in relationships *serious or otherwise* have constantly evolved, until its roots are nearly almost forgotten.

There was once a time when human and animalistic nature decided who you would spend the rest of your lives with. There was also a time when it took an enormous amount of effort and resources just to get a mate.

Fast forward to the new millennium, when finding someone to spend your life with has become entangled with various concepts like the idea of it being a sport, a game, a job, a task or whatever else you can compare it to. Commitment is now optional, not a necessity.

Is it harder to get guys to commit?

It only seems like guys are the more difficult gender to rein in, because that was what we believed for many years. As the concept of dating evolved, women are now just as likely to reject the notion of a commitment.

It’s just that they rarely admit to it and will hide that fact behind the premise of career prioritization, not being able to find their one true love, and just plain disliking the guy who asks them to commit. Does it sound familiar? Of course it does, because almost every guy uses the same excuses.

Why is it so hard to get guys to commit?

Admittedly, the reasons why guys don’t want to commit can be different from girls’. Their roles in society are perceived differently by the majority, and it influences how they handle their relationships.

Without the looming threat of a dried up uterus, guys have the advantage of time on their hands. Unless their sperm count is dwindling to a mere 10 million, the ones who do want children won’t be inclined to run out of the door looking for the next fertile female in the vicinity.

Aside from that, men *as well as women* are still subject to the basic and primal needs of human nature. Their capacity to commit to another person is dependent on whether or not their personality allows them to.

A person’s reluctance to commit is not a genetic predisposition. Their decisions are based on their past experiences, society’s influence and how they perceive themselves. If a guy does not want to commit, there’s not much you can do about it.

The other problem lies in the person they are seeing. Wanting to commit is an admirable trait, but some women find it hard to resolve themselves to the fact that it’s not that easy to achieve. With that being said, they sometimes end up ruining the possibility of a relationship by acting on a whim or manipulating the situation.

What mistakes do women make when getting a guy to commit?

If you’re looking to get a guy to commit to you, make sure that you never commit any of these common blunders.

#1 Bringing it up during inopportune moments. The concept of “now or never” can be useful at times, but not every time. Some women end up asking their guys about commitment at the wrong time, just because the pressure got to them.

The shock your partner receives won’t help the situation, and it can even turn him off the idea, because he’s caught by surprise. Try not to bring it up when you’re still resolving other issues or when you’re supposed to be focused on other priorities.

#2 Blurting it out of nowhere. Again, the pressure of the situation can push women to just blurt it out at random moments. The idea that you would bring the topic up while you’re at the grocery store can confuse a guy, and he might not take you seriously because of it. Set an appropriate time for this type of conversation, and make sure that you’re ready to discuss it thoroughly.

#3 Making it an obligation. Committing to someone is a choice, not an obligation. When you present it as something that your partner is supposed to do, he will start to question whether or not he agreed to it in the first place. Unless you announced it as an ultimatum when you first started dating, you shouldn’t assume that it’s a done deal. [Read: 6 ways to quit being a possessive girlfriend]

#4 Making it about themselves. YOU want the commitment. YOU want the security. YOU want to take the next step. Big mistake. When you put it that way, your partner will start to think that maybe this isn’t what HE wants. You need to ask your partner about what he wants, and not just prioritize the reason why you want to commit to each other. [Read: 12 signs you’re being selfish in your relationship]

#5 Comparing their situation to their friends. This never ends well. Comparing yourself to your friends is one of the things that annoy guys the most. It makes you come off as jealous and petty. Your sincerity will be questioned, because you seem like you only want it because your friends have it.

#6 Elaborating on a life plan without considering their partner’s input. Commitment can be scary, because it means that things will change. When you’ve already planned out those changes without considering your partner’s take on the matter, there is a chance that he will take it negatively. It would help if you ask him what he wants, and integrate it into both your plans for the future and your relationship.

#7 Talking about marriage. You’re just about to commit exclusively to each other. Why are you talking about marriage already? This is only okay if your partner wants to progress at the same pace as you. Some men want to get married immediately, but you are more likely to find a man who wants to test the waters first, before considering giving you a ring.

#8 Mentioning babies. ABORT! ABORT! You aren’t even dating exclusively, and you already want to have his babies? This is a recipe for disaster, because it makes you seem irresponsible and impulsive. You hardly know each other!

He may know that you might want to have kids one day, but that conversation is reserved for a later date. A really later date. It’s also not a good idea to mention that you’re on a biological deadline. Your guy is dating to find a partner. They’re not applying to be someone’s impromptu baby-daddy.

#9 Withholding sex until they get what they want. Men insist that they are simple beings who don’t know what you’re talking about, unless you specify your thoughts concisely. But they do know when they are being played, especially if sex is involved. This can work for small things like chores and favors, but using sex to squeeze out a commitment from a guy never ends well.

Some guys will humor you, but the sincerity of your plight for commitment was already lost the moment you decided to bribe him with sex.

#10 Assuming that they’re already committed. There are times when you don’t need to talk about getting into a commitment with your partner, but there are so many things that could go wrong with that. Plausible deniability is one of the most common consequences. Your guy can leave at any time, and they can even start seeing other people, while you’re left there wondering what the hell happened.

#11 Telling people that you’re already committed. The worst thing that could happen when you start telling people that you’re committed to someone who doesn’t know about it is when said partner finds out from someone else… and denies it. Some guys are nobler than others and will play along, but you can expect to have a talk and a possible break-up if they weren’t interested in being exclusive in the first place.

#12 Asking too early. First dates, second dates, third dates – those aren’t necessarily the perfect times to present a proposal to commit. Give it time, and make sure that it’s what you both want. Get to know each other better and make sure that your goals are in line with each other’s.

#13 Asking too late. This can also be a problem, because letting the question go unanswered for too long will leave room for too many assumptions. Are you just casually dating? Are you f*ck buddies? Are you just friends? Make sure that the progression of the dating stage is heading towards a commitment. That way, you’ll know when it’s the right time to ask your guy if he’s ready to commit.

#14 Letting other people ask for you. Are you in 7th grade? Stop. Just stop.

#15 Saying you don’t want to commit, then taking it back only when it suits you. I know it’s hard to let your guard down, but don’t be afraid to do it if being in a relationship is what you want. When you tell a guy that you don’t want to commit, he’ll take it at face value and act accordingly. When you take it back immediately, it will confuse him, and the worst that could happen is he’ll feel betrayed or in over his head.

Yes, women make these types of mistakes more often than we expect. However, you can’t really blame them, because dating is a confusing concept altogether. Don’t worry if you’ve done any of these pre-commitment mistakes in the past, because you now have the tools necessary to prevent your proposal to commit from blowing up in your face in the future. 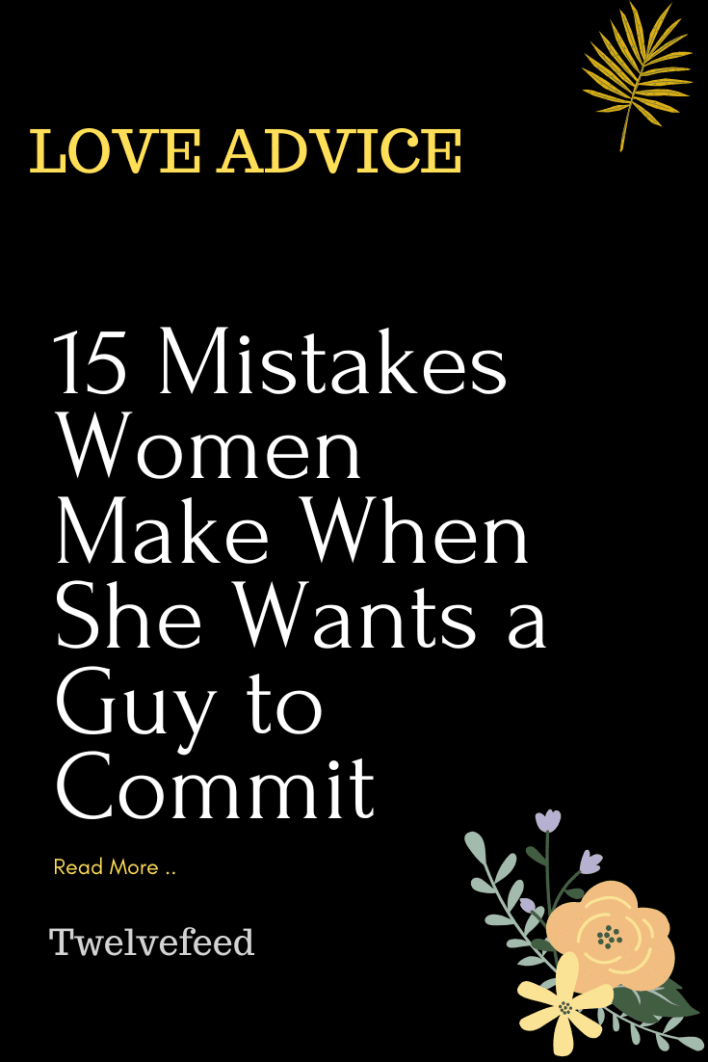 What Men Should Do When Given the Silent Treatment

11 Lessons You Need to Survive on Your Own