This month at the Screen Actors Guild Awards their was one couple who had the world talking – Kate Winslet and Leonardo Di Caprio. Affectionately known amongst their fans as “Kleo”, they were mingling with other stars including Brad Pitt, Tobey Maguire, Katy Perry and Matt Damon but could not leave each other’s side throughout the evening.

When Leo took home the best actor award for his leading role in The Revenant he grabbed Kate and bear-hugged her before making his acceptance speech. Since the pair first starred together 19 years ago, they have come a long way and proved to the world that they have relationship goals like nobody else.

You know you’re both really content with each other if you have the same adorable habits as these two.

15 When You Can Just Chill Together

Kate and Leo were captured on the set of James Cameron’s Titanic (1997) chilling in-between scenes. This was the movie that sky-rocketed both of their careers after succeeding to make over $2.1billion at the box office, making it the second highest-grossing film of all time. It was so popular that it was the first movie to be released on video whilst still being shown at the cinema. At the time of shooting, Leo was just 22-years-old and Kate was 21-years-old.

14 When You’re Not Afraid To Show Your Funny Side

There is the now famous nude scene in the Titanic where Leo’s character sketches a completely naked, except for the necklace, Rose played by Kate. Knowing that she was going to have to take her clothes off in front of her co-star, Kate flashed Leo the first time they ever met. That’s certainly one way to make friends quick.

13 When You Go Out On Your “First Date” Together

When Kate and Leo were stopped on the red carpet at the 55th Golden Globe Awards in 1998, they were asked by reporters, “Did you two come as couple?” Jokingly they replied, “Yeah, absolutely.” Afterwards they giggled together and confessed they were just joking, which was a shame as the whole world wanted it to be true.

Both stars were nominated for Best Actor and Best Actress awards that evening yet they lost out to Peter Fonda for Ulee’s Gold and Judi Dench for Mrs. Brown.

12 When You Get Dressed Up For A Big Night

Kate Winslet is the luckiest woman in the world, as quite often when there’s a big awards night she will be accompanied by none other than Leonardo Di Caprio himself. At the Golden Globe Awards this year, when Leo was speaking to Nancy O’Dell from Entertainment Tonight he said about Kate, “She’s my favourite actress in the industry.” That’s the words almost every actress would want to hear come from the heartthrob.

11 You’re Very Comfortable With Each Other

In 2008, Kate and Leo teamed up once more to work on Revolutionary Road, a movie about a young couple living in a suburb coming to terms with their own personal problems. The decision to work together again was natural, Leo told Ryan Seacrest in 2009, “We’ve been great friends for a long period of time. We were actively looking for something to do together. It felt really natural. She’s my homie.”

The director of the movie, Sam Mendes, was Kate Winslet’s husband between 2003-2010, who opted to leave the room when it came to the love-making scenes and watch from a monitor next door. Kate told Cinema Blend that Leo and her’s “relationship predates my relationship with Sam, and Sam always loved that.”

10 You Say How Much You Love Each Other

At the Golden Globes in 2009, when Kate picked up an award for Best Actress for Revolutionary Road, she said in her speech, “Leo, I’m so happy I can stand here and tell you how much I love you and how much I’ve loved you for 13 years. I love you with all my heart, I really do.” Leo replied by blowing kisses right back at her.

In an interview with Oprah Winfrey, Leo couldn’t hold back on how much he admired Kate even declaring that she was his favourite actress to kiss. He labelled their kiss, “a good old classic.”

Returning back the love, Kate told David Letterman, “Leo and I have known each other for a fairly long time; it makes us feel so old. It is scary that it’s actually been that long.”

8 When You Finally Get Married – Well Kind Of

Finally a wedding day for Kate and Leo – but don’t get too excited as it sadly wasn’t to each other. In 2012, Kate married for the third time to Ned RocknRoll, the nephew of Sir Richard Branson, at a secret ceremony in New York. She was walked down the aisle by Leo during the intimate service in front of just a handful of loved ones including her two children from the previous marriage to director Sam Mendes.

7 When You Can’t Keep Your Hands Off Each Other

In The American Journal of Therapy, published in 2003, they claimed that in any relationship touching is a huge part of keeping close. They revealed, “Touch is crucial in creating and strengthening romantic relationships. Tactile physical affection is highly correlated with overall relationship and partner satisfaction. Conflicts are resolved more easily with increased amounts of hugging, cuddling/holding, and kissing on the lips.” Maybe this is why for Kate and Leo they have had no arguments over the years.

6 They Always Put You First Before Anyone Else

No matter what point Leo is at in his ever-changing love life, he always puts Kate first and will choose her as a date for a ceremony before anyone else. He most recently split from 25-year-old Sports Illustrated model Kelly Rohrbach, the pair started dating last summer but ended their relationship due to busy schedules.

Kate is currently married to Ned Rocknroll and the pair have a baby son together, Bear Blaze Winslet. She also has a son, Joe Mendes, with her ex-husband Sam Mendes and a daughter, Mia Honey Threapleton with ex-ex-husband, Jim Threapleton who she divorced in 2001 after.

5 Knowing You Can Really Trust Each Other

There were a lot of emotional scenes in both Titanic and Revolutionary Road that the pair had to work on. Yet they trust each other entirely and Kate revealed, “We’re really lucky to have each other, because we’ve known each other for such a long time; we were really excited about how far we could go emotionally. And knowing that we have a certain trust level, there are no boundaries; we could keep pushing it and pushing it, and that was a real luxury to have that.”

Kate likes to be a good role model for young women as she feels she never had a positive one growing up. She revealed on an episode of NBC’s Running Wild With Bear Grylls, “When I grew up, I never heard positive reinforcement about body image from any female in my life. I only ever heard negatives. That’s very damaging, because then you’re programmed as a young woman to immediately scrutinize yourself and how you look.”

Three years ago, Leo set up the Leonardo Di Caprio Foundation which has helped to raise more than $450 million to protect the Earth’s last wild places and help work towards solutions to preserve and protect the environment.

3 When You Are Always Supportive Of Each Other

Another key to any relationship is to also celebrate each other’s achievements. Kate and Leo know they both won’t be winning at the same time, so they always make sure to step aside from time to time and let the other take the spotlight. Last year Leo said, “In a lot of ways, Kate and I have really grown up in this industry together; we’ve been a support mechanism for each other for such a long period of time. We’ve been there for each other and helped guide each other.”

2 When You Genuinely Make Each Other Laugh

A well-timed joke can help diffuse tension. Kate and Leo have had to make love, shout, cry and fight each other all on the big screen. Luckily they know how to make things less intense and that’s simply injecting some humour. In a 1997 interview with Entertainment Tonight, Leo said about Kate, “She’s such a terrific person in general that our chemistry naturally happened on screen. We just like each other as people. As far as doing a love scene, though, we laughed about it a lot.”

1 When You Stand The Test Of Time

There are few celebrity friendships and relationships that stand the test of time – especially in Hollywood. Yet Kate and Leo look as if they have cemented their companionship and could really do the distance. Leo gushed, “She’s still as beautiful and radiant as the day I met her. She is the consummate professional; she keeps pushing herself to an emotional truth when she’s working. That’s why I keep saying she’s the best.” Kate replied, “I think he’s more handsome than he’s ever been.” 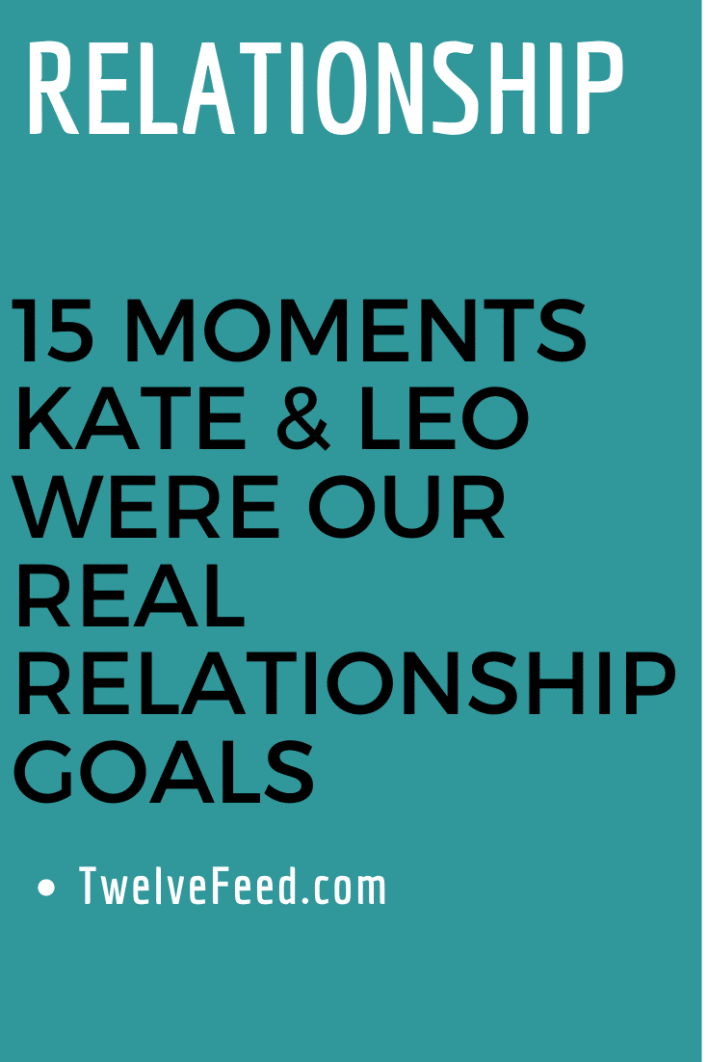 13 Signs Your Relationship Is Normal

The Reason Your Toxic Ex Is Still Stuck On Your Mind, Based On Your Zodiac Sign