Breakups make people bitter, oftentimes making the process a mess of feelings accompanied by a desperate need to retaliate. But there is something most people seem to forget: not everything was terrible, right?

It’s easy to be cruel at the end, and filled with bitterness. It’s human instinct to be tougher than you actually are at such a vulnerable moment. It’s usually during these times that words are said that can’t be taken back. Even if you somehow get back together at some point down the line, there are haunting words that can never be erased.

As terrible as it sounds, sometimes it’s easier to live with the end of the relationship if you make your ex feel bad. Does that mean it is acceptable? Absolutely not! But it is a fact: if you inflict pain on the person that caused you pain, it gives you something else to focus on—something other than your own feelings. It’s a cop-out, but one that many people use.

As much as you may feel like saying it, the following phrases are some of the worst to say in the midst of a breakup.

#1 “I don’t love you anymore.” This is terrible whether you’ve been dating for months, or years, simply because it’s like saying that after X amount of time with them, you no longer care. They’re not enough for you to love. [Read: How to know if you’re truly not in love anymore]

#2 “I don’t care about this relationship, and I haven’t for a long time.” Well, why not say that sooner, when you could have possibly worked through the issues? This is an insult, because it means you stopped caring about the relationship, and didn’t bother communicating. In a relationship, both parties have a right to know immediately when this happens, not weeks or months later.

#3 Pointing out all their flaws and annoyances. “Your breath stinks, your feet scratch me at night, and you’re way too short.” That’s nice of you to say! Pointing out someone’s flaws is a great way of making them feel beneath you, even if they actually aren’t. Don’t do it.

#4 Telling them you don’t think they’re attractive enough after having sex. Makes you wonder what on earth your lover was thinking while having sex for the last time. Did they think of someone else, or did they enjoy it because they knew it was the last time? You essentially get used, then dumped because you’re ugly.

#5 “I don’t trust you.” Obviously, one of you messed up one too many times, and everything burst at the seam. But there’s something about saying these four little words that really rubs some salt in the wound. It’s both, pointing out the obvious, and making it clear that the person isn’t trustworthy or reliable at all. [Read: 12 subtle signs it’s time you need to end your relationship]

#6 Suggesting you can remain friends with benefits. Oh, so the official status is too much, but the sex is just fine? Just a few downgrades, until you find someone better. Once you do, they can rest assured you’ll lose their number.

#7 “We make better friends.” This is the equivalent of saying “The sex isn’t good enough, you’re not attractive enough, but we have fun together when we’re not trying to be physical.” Being better friends means you get along, know how to have fun and laugh together, but you’re better off keeping it strictly platonic. Hearing that during a breakup is like a slap in the face.

#8 “Can you help me move my things out?” If you’re dumb enough to ask this after you’ve broken up with them, then, quite frankly, they’re better off. Don’t ask for help leaving—just leave. No one should ever have to help their partner move out, because that’s going to hurt even more—the process of undoing everything.

#9 Not saying anything at all. The only thing that’s worse than yelling, screaming profanities, and demeaning the other person, is falling off the face of the earth. Never texting, calling, or talking to them in general. Breakups should honor what you had together at some point, or at least be cordial, but this is pretty mean on all accounts. This is like saying, “You didn’t mean enough to me to say anything about wanting to go separate ways.” [Read: What is ghosting and how does it affect you?]

#10 “You’re just not…my long-term goal. I’d like to see who else is out there.” This translates to, “You were good for a while, but I never intended this to be a long-term thing, because I have higher standards.” Not only does this suggest you think you’re better than them, you are also suggesting they’re mediocre compared to the other fish in the sea.

#11 “My ex wants to get back together.” Saying this means only one thing: rebound. This simple phrase is tantamount to, “Congratulations, you’ve been used and discarded after serving your purpose.” Saying this during a breakup means you didn’t love your significant other; you simply needed someone for the time being, to feel less lonely and hurt. If you never stopped thinking about your ex *or never stopped talking* you had no business being in a relationship. Avoid this phrase at all costs—even if it is the case. [Read: 13 secret signs your guy isn’t over his ex yet]

#12 “You’re not worth the effort.” This means one of you put the other through so much pain, anguish, trouble, etc. that the relationship died off. This is what happens when you continue making the same lousy mistakes, and never learn how to kick your bad habits. But saying it in the middle of a split? Cold-hearted.

#13 “There’s someone else.” What’s one thing worse than leaving someone for their flaws? That’s right, leaving someone because you found someone else’s flaws bearable. This means the person leaving was looking around for someone else, or randomly met someone without intending to. Either way, the new person was “superior,” so your relationship is done. [Read: Love triangles and the confusing complications it brings]

#14 Saying anything about their weight, or penis size. If this is the reason for the breakup, for shame. Vanity screams immaturity, and surely the one being dumped is better off. If this is just what’s said after the fact, but not the sole reason, then you don’t really mean it—you’re just hurt. Whatever the case, though, this is a low blow, and chances are you aren’t in high school anymore.

#15 “We’ve grown apart.” Sherlock, you’ve solved the crime! Here, you point out the obvious *because it always is obvious*, and leave because you think you’re headed in a better direction. Although this is a legitimate reason to break up, it is one that both of you already know; it doesn’t need to be said.

Now that we’ve gone over what you shouldn’t say, it’s important to remember that it’s always better to simply be respectful. Regardless of why or how it ended, you two shared time together, made memories, and felt something. Chances are, you still do. Keeping these things in mind, and breaking up in a clear, concise, yet respectful way will make things go smoother.

Breakups are terrible, inevitable events that everyone has to go through at least once—though, for most, probably a lot more than that. They should honor what you both shared, once upon a time, but they rarely do, because it’s easier to be angry. 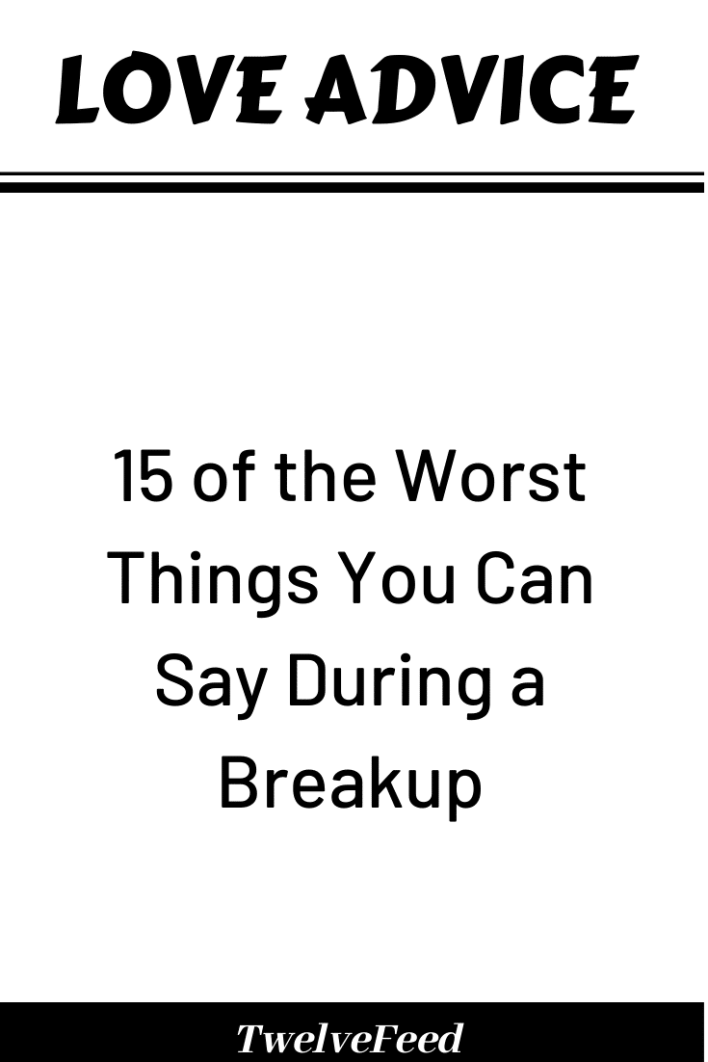 The Mental Checklist Women Use to Evaluate Men They Date