We all love a good romantic movie and from any genre. While Christmas is just around the corner and it’s a great time to snuggle up with your special someone and watch those Christmas specials, we’ve put together a list of romantic movies you might not have seen already and can watch all year round. Some of these we believe to be very underrated and deserve so much more attention which is why we’re bringing them to you. It will leave you feeling in love with love!

“There are two types of people in the world, hopeless romantics and realists”.

Award-winning fiction writer Bill hasn’t written another book since his divorce from his ex-wife Erica. Some nights Bill sneaks over to Erica’s house to spy on her and her new partner, creepy much! You can’t help but feel really sorry for him though. Lily Collins and Logan Lerman also star in the movie as Bill’s children. They are both aspiring writers and the movie follows how this family copes with everyday life, family dramas, new loves and how they interpret them through their writing. It’s a fairly easy watch but will leave you with something to think about.

“Isn’t everything we do in life a way to be loved a little more?”

The script for this movie is brilliant! The dialogue between the two characters flows so naturally, like it’s improvised. This movie literally brings to life your European holiday daydreams. You know, the ones where you meet a guy spontaneously. Then you have deep, existential conversations, you explore the city together, you talk about your dreams and hopes for the future, you share a kiss, all before you have to say goodbye not knowing when you’ll ever see each other again. Were you guys soulmates? Who knows?

“It’s fine to live in the now but the best thing about now is that there’s another one tomorrow. I’m gonna start making them count”.

Another movie where the dialogue seems improvised, flowing so easily between the characters of Sutter and Aimee, played by Miles Teller and Shailene Woodley. It follows the senior year of popular, life of the party Sutter. He goes out of his way to befriend an introverted, hard-working classmate of his, Aimee. They both challenge each other’s ways of thinking and as they get to know each other better, things become more romantic between them.

“Nobody feels like an adult. It’s everybody’s dirty little secret.”

Staring How I Met Your Mother’s Josh Radnor, his character Jesse visits his alma mater to celebrate his favourite professor’s retirement. He then meets a student called Zibby, played by Elizabeth Olsen. They start hanging out, contemplate the meaning of life, share their struggles blah blah blah and eventually realise that they have more than a friend connection. However, there is a 16 year age gap between them. Is age just a number? Can they make it work when they’re in such different stages of their lives?

One of Blake Lively’s earlier movies is about the character Annabelle, a beauty pageant contestant who died suddenly in the middle of her competition (end of story, just kidding!) She finds herself in a mortuary, as you do after you die, being tended to by a handsome young man called Elvis. He is taken aback by her beauty and leans in to kiss her (let’s just forget for a moment that she’s meant to be a corpse) and she miraculously comes back to life. Two young lovers from different class backgrounds come together to discover life and love together. Pretty cliche but will give you all the feels!

“The truth is the only safe ground to stand upon.”

It’s one of those typical boy rescues girl type scenarios but we just can’t help but love a story like this. Noni is a successful pop singer with everything you could ever dream of, the money, the fame, the awards and the fans but she is extremely unhappy and spirals into depression. She begins to develop a friendship with a police officer, assigned to be her bodyguard called Kaz. Shortly after their first few moments together, they begin to pursue a romance as she begins to challenge the restrictions placed on her by the music industry.

“If you don’t have anyone to share anything with then what’s the point of living?”

Not sure you can call this a romantic movie, maybe more about a character who is in love with social media and in love with a particular influencer she follows? It’s just too good so it’s made the list anyway. This movie uses black comedy to slap us in the face and make us feel a little uncomfortable forcing us to analyse our own relationship with social media and the people we follow. It’s about a character called Ingrid, played by Aubrey Plaza, who moves to LA to become best friends with one of her favourite social media influencers called Taylor.

Eternal Sunshine Of The Spotless Mind, 2004

“You can erase someone from your mind. Getting them out of your heart is another story”.

If you haven’t seen this film then you’ve been missing out but it is very underrated so if it’s flown under your radar then I guess that’s fine. It has an award winning cast from Jim Carrey, Kate Winslet, Kirsten Dunst and Mark Ruffalo. Have you ever wondered what it would be like if you could erase bad memories with someone and just start a relationship all over again?

I personally haven’t but this is what happens in this movie. 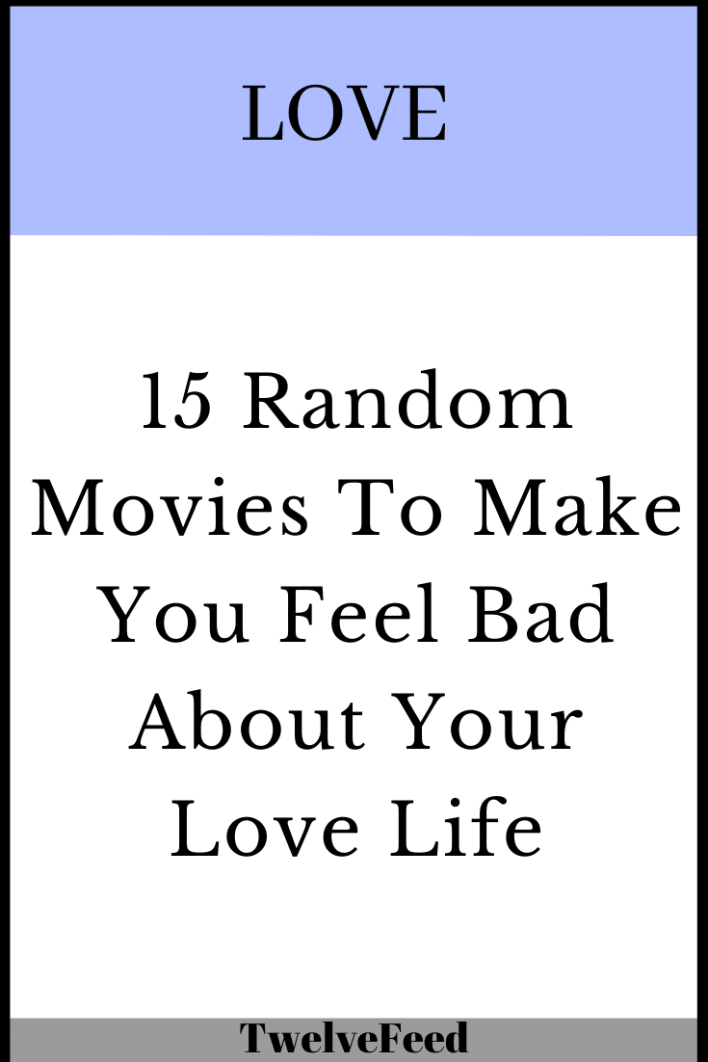 “I remember seeing a condom. I just don’t know exactly what it did.”

Jenny Slate is super funny in this romantic drama about an unemployed comic who has a one night stand with a graduate student and find out that she’s pregnant. An unplanned pregnancy would most definitely be a buzzkill but results in both hilarious and confronting situations where you have to make the most out of life even if life throws you a massive curveball.

“Loving somebody this much sucks”.

Get ready to cry some big, fat tears! This one will leave you wanting to snuggle up to anyone you love, a partner, friends, parents, your dog, it’s that emotional. Kumil meets a woman called Emily at one of his stand-up shows and starts falling in love with her but he’s very worried that his traditional, Muslim parents won’t approve of her. However, Emily suddenly become sick and is left in a coma. What happens next? You’ll have to watch it to find out.

“Breaking up with me was the best thing he ever did. I should break up with me.”

Can you ever be friends with an ex? What if you were once married to them? Celeste and Jesse married really young and now realise that they’ve drifted apart and that they are no longer the same people they were when they married. Celeste is adamant that they can both remain friends and still hang out and Jesse plays along with this idea because he is still in love with her, ouch, that’s brutal!

“I just can’t float around forever.”

Have you had your quarter life crisis yet? If you haven’t, it’s coming. It happens to everyone. Starring Keira Knightely, she attends her 10 year high school reunion and realises that not much has changed and this frightens her, as it would anyone. She spontaneously meets 16 year old Annika played by Chloe Grace Mortez and her friends and proceeds to get very drunk with them. To all the people that don’t feel like adults, pretty much all of us, this is the movie for you.

“Have you ever had a feeling and just known in your bones that somebody was gonna play a major part in your life”.

Chris Evans in a romantic movie? You don’t have to tell us again! Another one of those ‘romance in one night’ movies that we just can’t seem to get enough of. Everyone loves that initial spark you feel when you first meet someone. Nick, a musician (of course he is) meets Brooke late at night in a train station when she misses her last train home and offers to take her home. We’re aware that this could take a dark turn but fortunately for her they have that initial first meeting spark.

“You’re worth it and the fact that you don’t believe it has nothing to do with whether it’s true or not.”

That’s a mouthful! The indiest of indie movies and starring Josh Randor again but this time he directed this one too. It’s about a group of adults who have problems in their friendships, careers, relationships and you know, just life in general and how they have to deal with them and come out the other side, hopefully a better person.

Sleeping With Other People, 2015

Jason Sudeikis is one funny man. You might know him from Horrible Bosses and Saturday Night Live. This movie takes a spin on the classic friends with benefits storyline. Jake played but Jason runs into Lainey played by the fabulous Alison Brie 12 years after they had a one night stand. Now that’s a long time but it must have been one great night because they agree to be friends with each other and not sleep with each other again. Yeah right, like that will ever happen!

What Men Love Most About You, According to Your Zodiac Sign

15 Signs Your Partner Loves You More Than You Love Them