You may be fiercely independent and in control of your life.

But does your way of life ever make your boyfriend feel unnecessary or unwanted?

Every guy wants to date a girl who’s in control of her life.

And no guy likes a girl who’s too clingy or needy all the time!

[Read: 13 signs of a clingy girlfriend and ways to avoid being one]

But sometimes, your independent streak could make your guy feel undesired, or even make him feel like he’s unwanted baggage in your life.

And if that ever happens, that’s a sure sign that things may not remain so smooth in your relationship.

How to make your guy feel needed and wanted

A guy needs to feel desired in a relationship.

When he feels like he’s wanted and needed, he feels good about himself and the relationship.

He assumes he plays an important part in your life, and that makes him try harder to be a nicer boyfriend because he believes his behavior towards you has an impact on your life.

[Read: 16 do’s and don’ts to make your boyfriend want you more than ever!]

Dramatically put, your guy wants to believe that your life would be ruined if he didn’t exist in it.

Now, of course, that’s being overly dramatic, but I hope you get what I mean!

A man wants to feel like a man. And he feels like a man when he’s needed and desired by a special someone, you. It’s in his evolutionary genes, he loves the role of being a protector. And he feels good about himself when he sees himself as the provider of your happiness and security.

But if you ever make him feel like an unnecessary appendage in your life, chances are, he’ll subconsciously start searching for someone who needs him and wants him badly in their life! [Read: 25 tips to make your boyfriend smile and feel wanted again!]

It’s not hard to make a man feel needed and wanted. And almost always, it’s the little things that have the biggest impact.

Just keep these 15 things you can do for him in mind, and as long as you use these tips to display your need for him, you’d leave him beaming with pride and happiness, all because you made him feel more like a real man!

#1 Don’t reject him. Never reject his effort to make you happy. If your boyfriend sneaks up on you from behind to hug you, or if he messes the kitchen up just a little while preparing breakfast for you, don’t rebuke him for that. He’ll feel stupid for trying to do something nice for you, and he’ll hate you for it. [Read: 10 things girls should never says to guys ever!]

#2 Let him know you respect him. To your guy, your respect and what you think of him plays a big part in how he feels about himself. If you think he’s worthless, or not capable of doing something, it’ll hit him harder than his biggest critics. [Read: How to make your man happy in 20 cute ways]

#3 Appreciate him. Appreciate the little things he does, even if he doesn’t expect acknowledgement for it. If he fills a glass of water for you, or does your laundry, don’t just take it for granted even if it’s just a regular chore. Thank him for it. You’ll notice him smiling to himself when he thinks you’ve walked away!

#4 Show him that you love him. Tell your boyfriend or husband that you love him often. Even if saying those words seem overrated, it always feels good to hear it. And don’t just stop with words, show your love for him through your gestures too. [Read: 25 really romantic ideas to make your man melt!]

#5 Ask him for help. Allow yourself to be vulnerable in front of him. As strong and capable as you are, let your guard down in front of him and let him see your vulnerable and soft side. Talk to him about things that trouble you, and make him realize just how much you need his support too.

#6 Get possessive. You may trust your boyfriend completely. But every now and then, show off your possessiveness, especially when he’s going to meet a pretty girl at work or an old friend. Displaying your possessiveness may make him smile or laugh, but deep inside, it’ll make him see that you’re still scared of losing him, which shows just how much you want him in your life. [Read: 30 super sexy ways to keep a guy interested and smitten]

#7 Make up without keeping count. Take the initiative to apologize first to your man now and then. In love, it doesn’t matter who started a fight or who ends it, just as long as both of you feel closer after the fight.

Of course, you shouldn’t be a doormat who accepts faults each time both of you fight. But now and then, let him see that you love him enough to swallow your pride and make up with him even if it’s his fault.

#8 Let him see that you miss him. You do miss your guy when he isn’t around, don’t you? Tell him just how much you miss him and how eagerly you’re waiting to see him again. You can even text him something cute to make him smile. [Read: 36 sweet and cute things to text a guy and make him smile]

#9 He’s a good boyfriend. If you really like your man and see him as a great partner, tell him about it. Guys feel great when they’re complimented about how good a boyfriend they are. And he’ll try harder to be an even nicer guy and win more praise!

#10 Thank him. Thank your boyfriend and give him an appreciative kiss when he does something for you, even if it’s as simple as getting you your cell phone. When you’re in a relationship, it’s easy to overlook the little gestures and take them for granted. Always be appreciative of all the things he does for you. [Read: 25 qualities about a guy that make him a really great boyfriend]

#11 Consult him. Always consult him and take important decisions together. You may have made up your mind already, but take the time to discuss it with your man and ask him for his point of view. And if it does differ from yours, try to understand why he doesn’t concur with you, and explain your reasons to him. By doing that, he’d realize that his opinions matter to you and you take them pretty seriously.

#12 Don’t boss over him. Don’t get bossy or behave like he’s the one who needs you and you don’t need him back. You may assume that displaying your independence to him would show that you can live your life without him. But it may backfire against you and drive him further away! [Read: 14 things you say or do that emasculates your man instantly!]

#13 Show your affection. Reach for his hands while walking down a street. Wink at him as he talks to one of his friends. Cuddle him up or run your fingers through his hair when he acts cute. He may pretend to hate it, but deep inside, he actually loves it!

#14 Share your secrets. When a girl trusts a guy enough to share her innermost feelings, it subconsciously reveals to him just how important he is to her and how special he is in her life. Talk about your secrets with your boyfriend, and he’ll come closer to you! [Read: The right way to talk about past relationships and exes]

#15 Ask him for advice. If you want to make your guy feel needed and wanted, just ask him for advice. It’s as simple as that! Asking him for advice shows your man that you respect him and value him enough to do something based on his judgment and opinion. And he can’t get a bigger boost than that. He’ll swell up with happiness, and he’ll feel really good about himself within minutes!

[Read: 23 relationship tips and advice all women need to know]

Using these 15 tips on how to make a guy feel needed and wanted will definitely help him feel more loved and secure in the relationship. And he’ll surely fall more in love with you too! 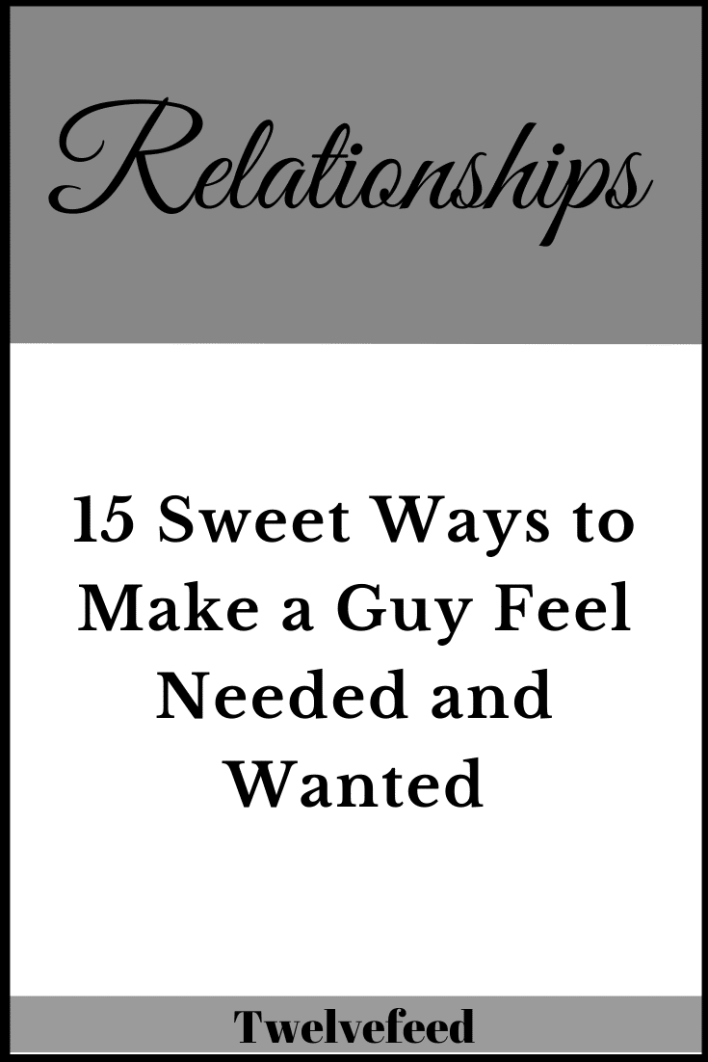 14 Subtle Signs Your Girlfriend’s Not Over Her Ex