When it comes to one party using another, it’s usually the woman who complains about being used. This is no longer the case. Perhaps it’s just because most men are too embarrassed to say out loud that they’re being used by their lovers. Society keeps pushing the importance of men being men onto us, and this may be why we don’t usually hear much about men feeling taken for granted.

I sat down with Seth, Kumar, and Rich, three guys in relationships that vary between 6 months and 8 years, and asked them to list some things that their girls do to make them feel used.

Before we proceed, let’s be clear here: although this list was curated by men, I am a woman who is sharing what I learned with all of you other women out there. It is very important to pick out and address the problems faced by your male counterparts. You’ll be surprised at how similar their problems are to ours.

We’re all cut from the same material

The saying that men are from Mars and women are from Venus may be true, to a point, but at the end of the day, we’re all here on Earth trying to make each day with our lovers count. Relationships aren’t easy, and I will be the first one to admit it. An open line of communication is very important, and so is taking the time to clear your head and sort out how to improve your relationship—because let’s be honest here, partnerships are a work in progress. [Read: 16 reasons why some people get taken for granted all the time]

Are you ready to find out more? Well, here are 15 things girls do that make a guy feel used:

#1 He does all the driving. This is the number one complaint that I got from the boys. Apparently, some women act handicapped the second they’re asked to take the wheel. One of the boys got dumped for saying, “Bitch, you can drive, so do it!” Well, I can see why harsh words didn’t get him anywhere but the struggle is real. Ladies, offer to drive next time you go out, okay?

#2 He gets blamed for everything. Some women act like they can’t be faulted for anything. Late for the movie? It’s his fault. Missed dinner reservations? It’s his fault. Lost an earring? It’s his fault. Blaming your man will definitely make him feel like you’re using him, so stop doing it! Yes, there are times when it’s his fault—but even so, there’s no need to make him feel bad about it. Imagine if the tables were turned. Would you enjoy being constantly blamed?

#3 He always pays. If you have cash, use it. Don’t hoard all your money, then blow it on nail polish and waxes. Ladies, even if your man makes more than you, there’s no reason why you can’t treat him once in a while. In fact, if he makes more than you, you have all the more reason for offering to pay, as it shows off your independence.

#4 He has to be responsible. Men also feel like they’re being used when they have to be the one responsible during play time. I know that it’s the norm for the man to take care of the condoms and all that jazz, but ladies, you have to step up to the plate too.

A funny example shared was one where a man’s girlfriend required him to text her at the same time everyday to remind her to take her birth control pill. Seriously? Girl, why not just set a reminder on your phone and do it yourself? According to her, “He should be just as responsible as me, so this is the least he can do.” Right.

#5 She just lies there. Men will also feel used when they have to do all the work during s. Some girls just lie there and don’t do much. Girls, if he wants to screw a doll, he will. However, he’s screwing you, so get on top once in a while and show him what you’ve got. [Read: 15 biggest s turn offs for guys in bed]

#6 He plans it all. There is no denying that it requires far more brainpower for men to plan a date than women. There’s a chance that he will feel exhausted just planning what to have for dinner, so don’t make him feel used and make an effort to take a load off his shoulders. Whether it’s planning what to do over the weekend, or figuring out the future, make an effort to be actively involved in planning.

#7 She turns on the tears. All three guys said that a woman turning on the water works makes them feel used. I suppose it all depends on the situation. For example, if someone dies, ladies, go ahead and cry. If he cheated, please cry the night away. If he forgot to put the toilet seat down yet again, or if he left his socks on the stairs, don’t even think about tearing up. Some women use tears as a way to guilt trip their men into doing things for them—and this has to stop right now. You make all the other real women out there look bad.

#8 She strings him along. Of course, anyone would feel used if their partner strung them along. Women are used all the time in this sense, but either way, it sucks being the one with the short end of the stick. An example is when a woman leads a man on and makes him think he’s special when, in fact, she has two other guys on the side. Be honest about the state of your relationship.

#9 She yells at him for making an effort. Alright girls, it’s totally normal to lose your temper once in a while, but if your man messes up trying to do something nice for you, you have no right to flip out. An example from one the guys interviewed was about how his girlfriend yelled at him for putting her underwear and socks in the same load of laundry.

Her rationale behind it was that feet germs should not mix with underwear germs. Not only does she need to address this psychotic form of OCD, she also has to learn to appreciate the fact that he tried to do something nice for her, and not just focus on the negative. [Read: 36 sweet and cute things to say to your guy to make him feel loved]

#10 She’s too dependent. I got this point straight from my partner’s mouth, and as much as it hurt to hear, he’s right. Basically, he thinks that I’m not independent enough. Being a writer means that my income is terribly inconsistent. Depending on how much I work, sometimes I’m rolling in dough and sometimes I’m pinching pennies. More often than not, I depend on him to bring home the bacon and, as much as he loves me, he feels used to a degree.

Girls, if you’re in the same boat as me, you need to address this issue before it gets out of hand. Learn how to make it on your own.

#11 She points out his flaws. Another thing that girls do to make their guys feel used is point out their flaws. Complaints such as him not being muscled enough, not lasting long enough during s, not being romantic enough, and so on are very common. Girls, the problem is that guys will take this the wrong way and think that you’re criticizing them—which, in a way, you are. He’ll think that because you’re not satisfied with him as a person, you have an ulterior motive for being with him and thus, are using him.

#12 She doesn’t show appreciation. Ladies, here’s a little secret: men are secretly divas inside, and want to be shown that you care about them. There’s no need to go to the moon and back to prove your love. All they need is a simple show of affection every now and then, to show that you care for them and are not using them. [Read: 25 ways to make your guy feel appreciated and cared for]

#14 She doesn’t keep her promises. Another issue that will have guys questioning if their ladies are using them, is when they constantly fail to keep their promises. It’ll give him the impression that you’re not taking anything seriously and that you couldn’t care less about him.

#15 It’s always about her. Another surefire way to get a man questioning if his lady love is using him is making everything about you. Relationships are a two-way street, and equal attention has to be paid to both parties. It can’t always be about one person, because that’s a definite way for the relationship to end in flames.

Whether you are a guy or girl, it is very important to communicate with your partner regarding what makes them happy or sad. Do all you can to infuse positivity and love into your relationship and don’t ever make them feel like they can do better by being guilty of the 15 behaviors identified above. 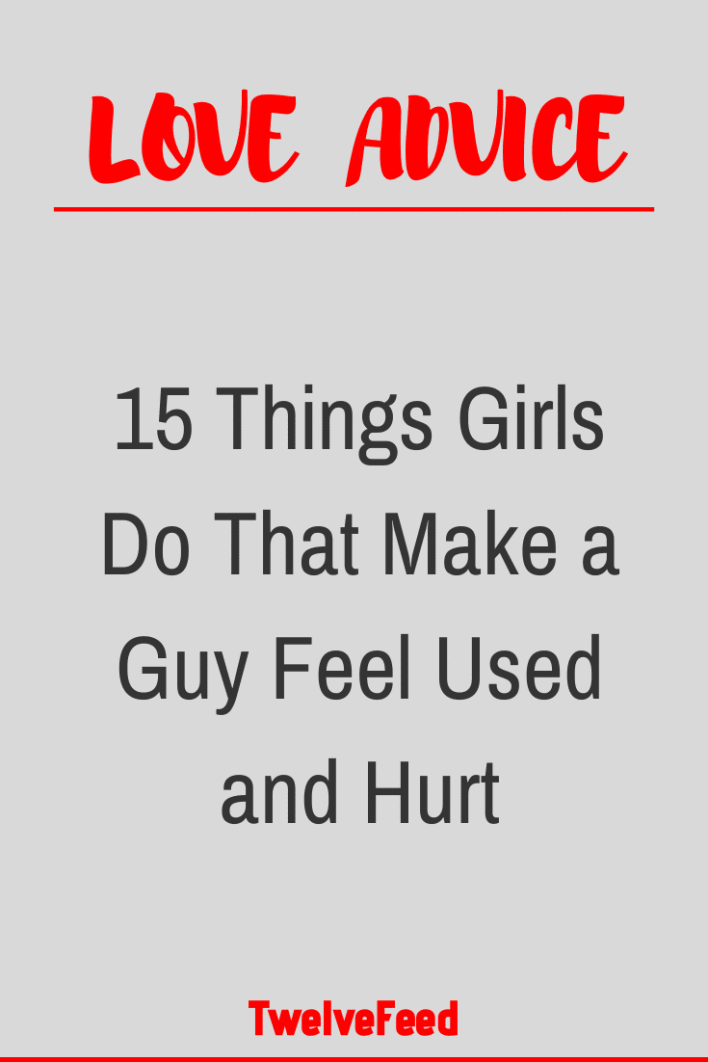 8 Stiff Facts about Morning Wood and Why Guys Get Them

11 Reasons Why Women Find Men in Uniform So Irresistible