Moving in with your boyfriend can seem more like fun and less like a big life altering decision.

While moving in is fun, it’s also something you need to give a lot of thought.

So do you know if he’s a great guy?

Do you think both of you will have a perfect relationship after you move in?

Will you moving in lead to a proposal and babies soon?

The only way to really know for sure is to try it, right?

Moving in with your boyfriend

No relationship is the same, and when it comes to moving in too, no experience will ever be the same.

But there are a few things that are common while moving in together.

There are right moves. And then, there are a few wrong moves.

If you want to make sure that both of you set off on a perfectly romantic start after moving in together, here are a few things you need to talk about with your boyfriend, and ask yourself the real answers.

5 THINGS TO THINK ABOUT BEFORE MOVING IN

If you haven’t moved in just yet, give these pointers a deep thought. Sometimes, it’s the little things you overlook that can play the biggest part.

#2 Be sure of your decision. Are you completely sure you want to move in with your boyfriend? Take time to decide about it and weigh all the options. It’s alright to feel confused as long as you’re excited about moving in together. Don’t let infatuation cloud your judgment though.

#3 Consider your independence. Moving in together is something that is inevitable when you’re in love. It can happen now or it can happen a few years down the lane. You may be in love with your sweetheart, but are you in the right frame of mind and have the intellectual maturity to give up on your own freedom just to share some bedroom space with your lover?

#4 How is your boyfriend really? Is he a great guy? Do you really see yourself walking down the aisle with him years from now? If your boyfriend’s gentle and considerate of your feelings, it’s a safe plunge. But if he’s domineering or wants things his way, ask yourself if he’s really the one for you.

10 THINGS TO THINK ABOUT AFTER MOVING IN

Have you moved in already? It’s not too late. Here are a few more things you should consider to have a perfectly romantic relationship.

#1 Be prepared to see his not-so-nice side. All of us show off our good sides when we’re with someone. But it takes living with someone to see their real side. Your boyfriend may have a few flaws or differences from your behavior. It’s not weird. He’s just being himself.

#2 Split the household chores. Give this a serious thought even if it’s toe curling and awkward to talk about. Create a list of necessary chores and split the chores right down the middle unless one of you is willing to take on more responsibility. But unless there’s a real good reason to unfairly split the chores like one working partner and one homemaker, try to keep it balanced.

#3 Take time to settle in. Dating is very different from moving in together. When you move in, you’re practically living with each other 24/7. Accept the fact that the relationship can feel different at the beginning. He may have pampered you like a princess until now, but now that you’ve both moved in, he may expect you to be more handy and less like a damsel in distress.

#4 Talk about the differences. You and your boyfriend are not two peas in a pod. Both of you are two individuals with different wants and interests. So talk about your differences and lifestyle choices with your boyfriend. When you move in together, both of you have to make a few compromises, be it watching a favorite show on the television or deciding how many times to go out in a week.

#5 Learn to forgive. When you move in together, there are bound to be a few differences and misunderstandings at the beginning. You and your boyfriend have to take the pains to go out of your ways to help the other person feel comfortable in the new environment. And if mistakes do happen, learn to forgive.

#6 Always communicate. Talk about your feelings, it’s really the right thing to do after moving in together. Forgive those little mistakes, but talk about it with your boyfriend and let him know what’s on your mind. Misunderstandings are good, because they help your boyfriend understand you better. But conflicts just aren’t any help in the relationship. Avoid conflicts, but communicate each other’s thoughts.

#7 His friends and yours. Both of you have to avoid bringing friends over to your place often for a couple of weeks or months. Take time to understand each other and live with each other before bringing confusions and new people into the house.

#9 Talk about money. Talk about money, individual savings and expenditures. Some things are better left out in the open than brushed under the carpet. Moving in is like a little marriage experiment. It can help both of you experience the reality of marriage before taking the plunge.

#10 Be serious. Living together with your boyfriend is no joke, and it shouldn’t be taken lightly. It’s better to consider it seriously and live seriously than look at it as an easy way to spend more time with each other or have more sex. Making any mistakes here will only force both of you apart. Be serious about the relationship and work together as a couple instead of two individuals.

Moving in with your boyfriend is just like getting married, without the license. Keep these 15 tips in mind and your next step together will be a walk in the clouds. Get these wrong, and one of you could nip a perfect relationship in the bud. 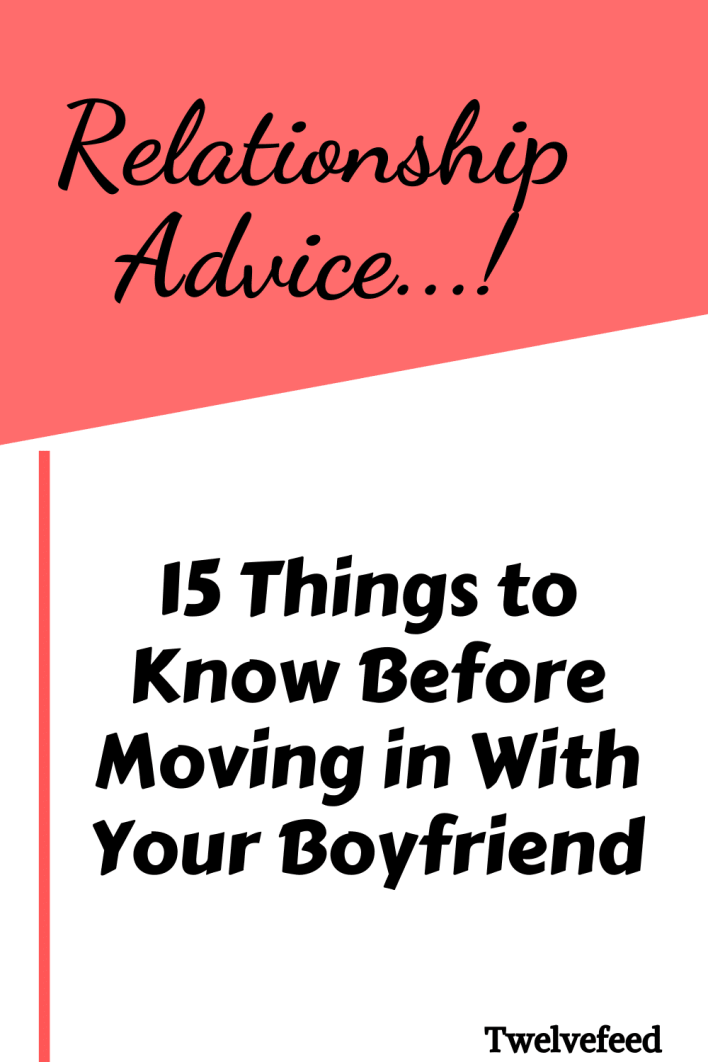 How to Tell a Girl You Love Her Without Losing Her