Are you creating your own relationship problems? Are you and your sweetheart locked in some unspoken battle with each other? There are a lot of things that can destroy a good relationship, but many of these problems can be solved by you and your own positive reactions to them.

Not one of us is perfect, and that is the first major understanding we need to confront when we are in a solid relationship. We are in control of how fast we screw things up or put things back together. What most of us don’t seem to get is that relationships take a lot of work. They don’t just happen. There is give and take, forgiveness, and the ability to be humble when the need arises.

When you take a moment to look at your relationship, one of the first questions you should ask yourself is what can you do to make things better? You can’t force someone else to change for you. Only you can change yourself and hope that, through positive action, you can change your relationship from one that is in decline to one that is growing and full of unlimited possibilities.

15Holding On To Grudges

So, he left the toilet seat up the other week and you got a rude awakening in the middle of the night when you fell into the potty. You had every right to be ticked off then, but are you dragging that anger around with you, days or even weeks later? Holding on to grudges is poison to a relationship. It breeds hatred, distrust, and intolerance towards the other person. Learn to forgive and let the small stuff go. Your relationship depends on your ability to move forward and focus on the positive.

This sounds awful, I know, but one quick way to ruin your relationship is to let yourself go downhill when it comes to your looks and hygiene. Let’s reverse the situation for a moment and ponder how you would feel if your man suddenly started packing on the pounds, walked around the house in his dirty boxers, and failed to brush his teeth every day. You would more than likely get sick of his behavior before too long. If you are the one who is spending time wearing ponytails full of hair knots, walking around in dirty old sweats, and not taking care of your personal appearance, then you can expect to be single one day soon. Keep up your looks and your health, not only for him, but for your own self-esteem.

Relationship goals are essential if you are serious about being in a long-term, committed relationship. Without these goals, you and your sweetheart are just coasting on a half baked wish. Relationship goals are goals you and your significant other set together. They can include money saving goals, house buying goals, future retirement goals, and even vacation goals. Setting goals with someone you love shows that you are in the relationship for the long-term. It also gives you and your partner a positive focus, even when things aren’t going as planned.

12Constantly Trying To Improve Him

We are all imperfect, but that doesn’t give the world the right to force an improvement program on anyone, and that includes your significant other. When you are in a relationship with someone, part of the journey is learning to accept and love the other person in his or her entirety. That includes faults. If you feel the need to constantly try and “improve” your significant other when he isn’t asking for any help, he may come to resent you and the relationship could take a bad turn.

11Complaining Way Too Much

Have you ever hung out with someone who complained the entire time you were together? It’s annoying, isn’t it? It’s no different when you are the one complaining: after a while, the other person gets annoyed and stops wanting to hang out with you. If you find your mouth running off on the complain train when you are with your sweetheart, it is time to reign it back in. Do some personal soul searching to figure out what your problem is and make a conscious effort to stop looking for things to hate, and start practicing a bit of gratitude.

10Belittling Him In Public

Never, ever belittle another human being in public. You might see a parent doing it to a child or an adult doing it to their significant other, but don’t do it yourself. People who are belittled in public carry that hurt with them for a long time. If there is something you feel you need to say, step back, take a deep breath, and save it for when you and your partner are alone.

We all make mistakes and sometimes we can be jerks, but that doesn’t have to destroy a relationship. When you know you were wrong about something, apologize to him. If the two of you got into an argument and you said something hurtful, just tell him you are sorry. You don’t have to turn it into a long speech and you certainly won’t lose face for it, but saying you are sorry can go a long way towards healing a bad situation and making things right once more.

I had a boyfriend that would try to make me jealous. He openly flirted with other women, called up other women on his way to work, and collected the photos he would get them to send him. He threw it all in my face and it made me insanely jealous. One day I had enough and I stopped reacting to his games. Without a reaction, he soon stopped openly flirting with other women, but by then he had lost my trust. I learned that some guys thrive off of making women jealous and other guys really do not deserve the jealous treatment. In both cases, letting go of the jealousy is your best bet.

7Tattling On Him To His Mother

Don’t meddle with the mother. If you and your boyfriend are having problems, don’t bring his mother into it because it will make the situation even worse. Besides, that it’s his mother and not your own. No matter how close you think you are to his mom, in the end she will side with him. Instead of tattling on him to her, confront him directly about any relationship problems.

6Giving Him The Silent Treatment

Oh, this one is the worst. You know what? If you are upset or angry about something your partner did, the worst thing you can do is ignore him. If you feel that there is an argument brewing underneath all the stress, then let it out. All healthy relationships have arguments now and again, and the best arguments are when issues get resolved. If he said or did something that hurt you, come out with it. Ignoring him and the situation will destroy your relationship. Speak up.

5Not Giving Him Free Time

Everybody needs a little space now and again, some of us more than others. Check your insecurities at the door and let your man have some free time when he needs it. Whether he just wants to enjoy time alone in his man space or he wants to go hang out with friends, give him the time to do it without giving him a hard time about it.  In return, you will also be getting some free time of your own to work on a project, read a book, or go hang out with your own set of friends.

How would you feel if you caught your man reading through your phone, checking out your search history on your computer, and rummaging through your drawers? It probably wouldn’t feel so great, would it? Guys are no different, and many relationships have been ruined because one person didn’t trust the other. If you feel that you have a need to spy on your man, you need to examine the reasons why. If you believe that he is cheating on you, ask him about it directly. If he says he isn’t, but you still feel that he is, it may be time to examine why you are in a relationship with someone you feel you can’t trust.

Do you find that you are constantly lying to your significant other? Maybe you are trying to cover something up or maybe you just don’t feel like explaining the exact truth to him. Whatever the case, he is going to discover that you have been lying to him sooner or later. Instead of keeping up the game, explore the reasons as to why you have been lying to him and then make a sincere effort to tell him the actual truth.

2Not Supporting His Dreams

We all have dreams, right? You have dreams and personal goals and so does he. To keep your relationship moving on a positive note, make an effort to support his dreams. For example, maybe he has been dreaming of starting up a blog about his favorite sport or television series. Instead of telling him that there is no way he could make it as a blogger, go online and order a book on blogging for him. This simple gesture shows him that you are right there beside him, and if he wants to dream about making it big in the blogging world, you will help him out.

1Forgetting He Has Feelings Too

Never forget that your sweetheart has feelings too. We can all be so easily hurt by the people that we love and sometimes we may be the ones doing the hurting. Before saying something hurtful or dismissing how he is feeling, turn the situation around on yourself. How would you feel if he simply dismissed your feelings?

Maybe you feel that he is the one who is being insensitive. If that is the case, consider sitting down and having a serious talk with your man and explore the possibility of couple’s therapy. Relationships are meant to be mostly enjoyable, and they can be if both people take the time to realize that the other person also has feelings. 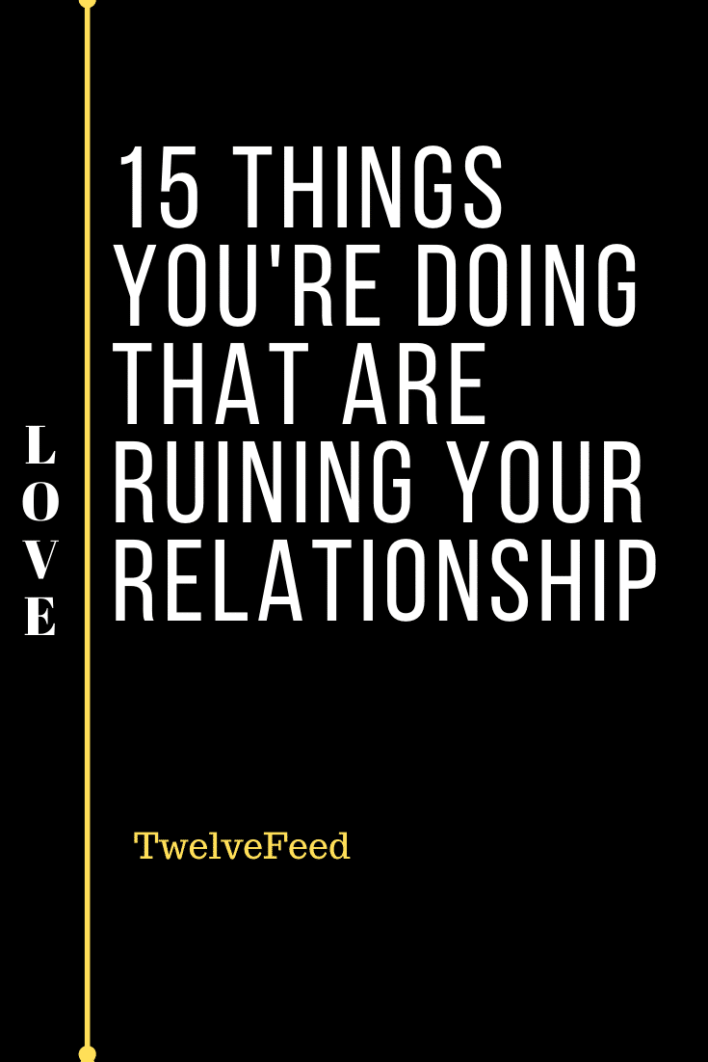 12 Relationship Red Flags That Should Be Deal Breakers

13 Reasons Why You Crush On People Outside Of Your Relationship