Being in a relationship is awesome. Maintaining a relationship is another thing altogether. Although a lot of women are now more assertive and dominant, the rest are still guided by the idea that guys need to adhere to some sort of standard for boyfriends.

In that case, the men have no choice but to step up and turn themselves into boyfriend material. There’s no way to determine which particular type of boyfriend works for any one girl, but it’s possible to be as close to ideal boyfriend material by making a few changes.

Once you’re in that category, your chances of finding a girlfriend will start to look more promising than when you weren’t boyfriend material. Duh.

But before you start telling people that you’ve decided to become someone’s boyfriend, do you have any idea what it means to be boyfriend material?

What makes you boyfriend material?

#1 Loyalty. A boyfriend needs to be someone trustworthy. It’s not just about being monogamous. Your partner should be able to trust you with their physical and emotional well-being.

#2 Attractiveness. Attraction is subjective. Your partner needs to be attracted to you – not just physically, but also emotionally, intellectually, and spiritually.

#3 Compassion. This is where love comes in. You can’t be someone’s boyfriend if you’re not willing to let people in. Share your feelings, empathize with your partner, and do what you can to connect.

But you already have these traits! Why are you still not boyfriend material? It’s probably because having those traits isn’t enough. You have to put them in action, and it’s not easy, considering there are so many things that you need to do as a boyfriend.

This could also mean that you have non-boyfriend material traits. There are also traits that make you incapable of being a boyfriend, let alone a good one. [Read: The way to a woman’s heart is through her funny bone]

What makes you non-boyfriend material?

The following traits are those which many women consider to be major turn offs, and should therefore be shed from your personality.

#2 Insecurity. You can’t be in a healthy relationship if you don’t think much of yourself. Your insecurities will reflect on the way you handle your side of the relationship, thereby ruining your chances of getting together with the girl you like.

#3 Selfishness. Selfish people are the ones who worry more about how people perceive them, rather than how they should treat those that they care about. They also count favors, measure affection, and resent people who don’t live up to their expectations. How can you be a caring boyfriend if you embody this type of trait? [Read: What men think impresses women and what actually does]

How to become boyfriend material

We can’t exactly enumerate a step-by-step cheat sheet for you to become boyfriend material, but we do have some helpful hints that will take you one step closer to forming a special bond with someone you really like.

#1 Be intuitive. Intuition and sensitivity are your most effective assets in becoming boyfriend material. Knowing where you stand can go a long way to becoming a good boyfriend.

#2 Be selective. Be a good boyfriend to a good girlfriend. Avoid abusive, opportunistic, and close-minded people who will only ruin your positive outlook in life. If you’re already in that type of relationship, do your best to help your partner deal with their problems. Get out of a relationship if your efforts aren’t making a difference. [Read: 15 types of bad girlfriends who’ll make your life hell]

#3 Be honest. A relationship won’t work if it’s based on lies. We understand that there are some things that are better left unsaid, but lying won’t help make them disappear. Sooner or later, the truth will come out. If it doesn’t, the weight of your dishonesty might affect your relationship.

#4 Be polite. Even though you’re in a relationship, it does not give you a free pass to treat your partner horribly. No matter what situation you are in, treat them with the utmost respect, and ask them to do the same for you.

#5 Be chivalrous. Being a good boyfriend requires you to perform at least the most rudimentary forms of chivalry. Opening a door for your partner, paying the bill on the first date, or just offering to do small chores that you know you’re more physically capable of are some of the ways you can be more chivalrous.

#6 Be a [gentle]man. Do what society expects you to do – in the context of dating, that is. Make the first move, call her first, pick her up, escort her home, or put your jacket over a puddle. We’re kidding with that last one, but you see where we’re going with this. [Read: 13 rules of etiquette for the modern gentleman]

#7 Be generous. If you want to shower her with gifts, go ahead, but being generous isn’t just about material things. Be generous with your affection, your attention, and your love. Don’t be shy about giving everything you’ve got. The rewards more than make up for it.

#8 Be daring. Even men have insecurities when it comes to dating. Throw those out the door and be confident about the fact that you are boyfriend material. Any girl would be lucky to have you! So go out, talk to the girl of your dreams, and make it happen.

#9 Be assertive. Don’t be complacent. The ones who don’t go after what they want always end up losing. That’s what they say about “nice” guys, right? So, don’t be a nice guy. Be an awesome, all-around, good guy. [Read: 12 ways to transform from the nice guy to a real man]

#10 Be open to compromise. To be a good boyfriend, you have to know when to back down from a fight. You don’t even have to fight at all. Just talk things through, and communicate your wants and needs to your partner. Make sure you consider hers, too.

#11 Be spontaneous. Protocols and patterns can be boring, sometimes. Do things differently just to spice things up. Good boyfriends know when to have fun and when to take chances. Just don’t do anything illegal or dangerous, ‘kay? [Read: 25 signs and qualities that make the best boyfriends in the world]

#12 Be vulnerable. Stop putting up walls just because you’re afraid of getting hurt. Your partner might be feeling the same way, so be the bigger person, and open yourself up to that person. Seeing you do that may urge them to open up to you more as well.

#14 Be gracious. If you embody all these characteristics and attitudes, but still can’t get a girlfriend, don’t fret! That just means that the person you thought you liked isn’t a good match for you. You don’t want to force someone to like you just because you want them to, right?

#15 Be vigilant. Don’t give up so easily. If someone rejects you, you can always find someone who will appreciate you for being the awesome boyfriend that you are. [Read: Top 9 reasons guys get rejected by the girls they want]

Becoming boyfriend material is not just about performing specific duties. It is also about being a good person, and being able to show love to someone who needs and deserves it. 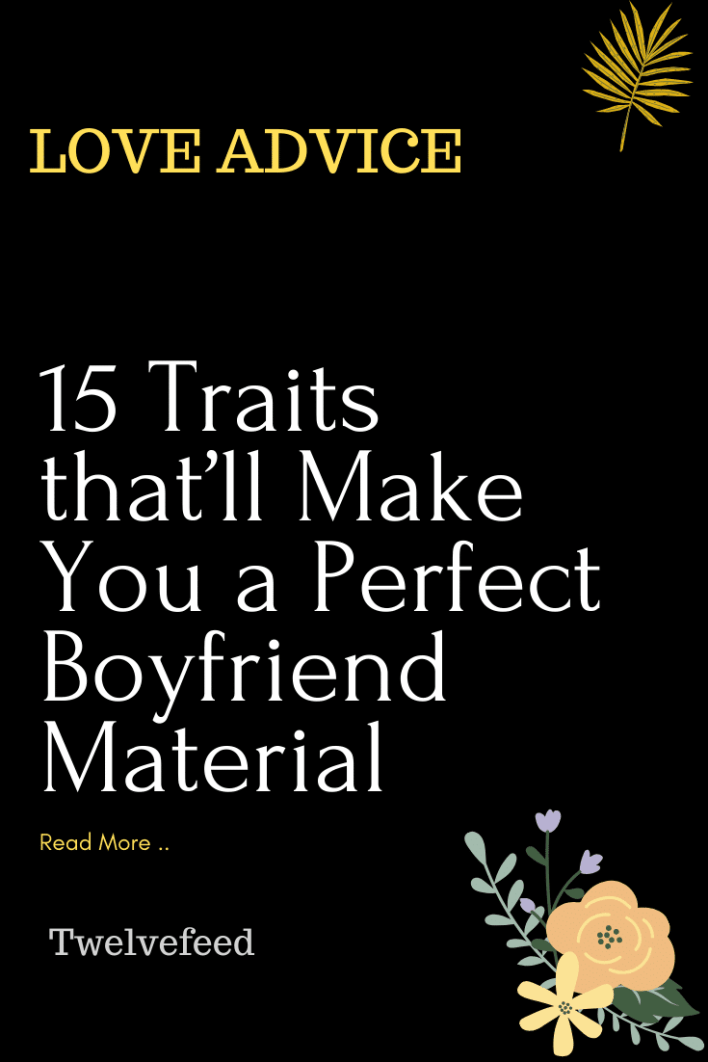 10 Super Subtle Gestures that Reveal Someone’s Into You