Whether you believe in love at first sight or taking a closer look, whether you’re in a long term relationship or something that is days old, there has to be respect involved. Yes, it’s true that being in a relationship calls for mutual respect and understanding, but at the core of it all, you must respect yourself.

I’ve heard horror tales of women letting their partners step all over them because they’re afraid of ending up alone. Hello, girlfriend! Wake up! There’s a whole world of men out there and if you think that the loser who’s pushing you around is your best option, then maybe you really deserve to be with him. It all boils down to taking a look at yourself and evaluating your self worth.

16 things you need to do to start respecting yourself more

There’s nothing more important than feeling good about yourself and whether you have a man in your life or not, you need to prioritize that. Remember that only once you respect yourself will he respect you back.

I’m not saying that it’s going to be easy. It’s probably going to be bloody difficult breaking that bad habit of not respecting yourself in a relationship, but trust me when I say that your hard work will pay off. [Read: How your self respect affects you and your relationship]

If you have no idea where to start, here are 16 things that you can do to start respecting yourself in a relationship.

#1 Let your voice be heard. Don’t let your man dictate the terms of your relationship. You’re not an animal to be strung along. Sure, relationships are all about compromise, but be sure that there is a balance and that it’s not just you doing all the compromising.

#2 Spend time with your friends. Set aside several days a month for your friends. Whether it’s a one-on-one brunch with your bestie or cocktails on ladies night, be sure to respect yourself enough to nurture relationships other than the one that you share with your man.

#3 Spend time alone. Besides spending time with your friends, you also have to carve out time to spend alone. Sometimes, all you need is a little space to clear your head and center yourself. Don’t let anyone intrude on your private time. If you can’t disappear for a day, commandeer the living room for several hours and do your own thing. Don’t let him venture in until you’re ready. [Read: 11 tips to fall in love with yourself and be a much better you]

#4 Be independent. Respect yourself enough to make your own money and decisions. Set personal goals, have your own circle of friends and take the liberty to be an independent woman. You’ll find that the more independent you are, the more power you’ll have in the relationship.

#5 Make time for your hobbies. A problem that most women face when they enter into a relationship is that they don’t have enough time to do things for themselves. Whether it’s sitting at a café alone to people watch or spending the afternoon getting your nails and eyebrows done, don’t neglect the things you enjoy doing just because you have a man to ‘look after.’

Partake in healthy activities that will improve your overall well being. Examples include mountain biking, rock climbing, jazz lessons and anything else fun and positive that you never thought you would try.

#7 Set down rules. Another way to respect yourself in a relationship is to set down some ground rules. Of course, there’s no need to set anything in stone but be sure that both parties are aware of the dos and don’ts. For example, be clear about the consequences of infidelity and highlight how important it is to practice mutual respect for one another. Let him have his say and be sure to have yours. [Read: How to master positive self talk and banish negativity]

#8 Look good. Another way to respect yourself in a relationship is to never let yourself go. Take pride in looking good not just for your man but for yourself. Exercise, eat right and don’t neglect hygiene. No harm ever came to anyone who overindulged in yoga and made it for her monthly wax appointments. [Read: 13 easy ways to amp up your physical attractiveness instantly]

#9 Forgive yourself. If you did something wrong, forgive yourself and move on. Don’t overburden yourself with guilt because, at the end of the day, it’s easier to forget than to dwell on it.

For example, Maddy’s boyfriend entrusted her to care for his pet iguana when he was out of town. Sadly, she overfed it and it died 3 days in. Although he eventually forgave her, Maddy still hasn’t forgiven herself. It has been 5 years since that dreadful reptilian incident. Do you see the point in not letting go? I sure don’t. Respect yourself enough to forgive your past grievances.

For example, Alexis, a devout Christian, is dating David, a staunch Atheist. I have no idea how they managed to make their relationship work for 8 years but the point is that they did despite their core differences. According to Alexis, “He never tried to force feed his beliefs onto me and I never did it to him. We respect each other’s beliefs and that’s what makes us work.” [Read: 20 signs you’re a people pleaser who’s ever willing to change]

#11 Stop comparing your relationship. I know someone who got dumped soon after she made the move to Finland to be with a man she only knew for 5 months. Her Facebook updates were all rainbows and butterflies but I knew she was dying inside. The thing is, she displayed a deliriously happy image of herself and her relationship to the whole world that anyone who didn’t know the real story would undoubtedly be jealous.

The moral of the story is to respect yourself enough to be happy with what you have. Don’t compare your relationship to someone else’s. You don’t know what lies behind those cleverly filtered Instagram photos and happy-go-lucky status updates. [Read: 23 must-know relationship advice for women]

#12 Don’t regret your decisions. Stick to the choices you made and roll with it. There’s no point looking back and regretting every little thing you did. Your life is as shitty or as awesome as it is because of the choices that you made. Don’t regret anything that happened and respect yourself enough to know that you can improve things if you tried.

#14 Constantly make room for improvement. No matter how awesome you think you are, there’s always room for improvement. You should take active steps to be better at everything you do. From being a better listener to being a better chef, there’s absolutely nothing wrong with wanting to become a better version of yourself. It’s a definite indicator that you respect yourself enough to try. [Read: 12 steps to change your life and find your happiness]

#15 Practice effective communication. Another way that you can respect yourself in a relationship is to effectively communicate with your partner. Don’t take it upon yourself to pent things up inside and assume that you’ll work everything out on your own. Share your troubles, fears, joys and anything else you feel with your man.

#16 Know your worth. Never underestimate your worth and never be bullied into submission. Fight for your rights and be sure that he treats and appreciates you the way you deserve. Respect yourself enough to ditch him if he doesn’t. [Read: 16 reasons why you’re so easily taken for granted by others]

Always listen to that inner voice of reason in your head. It’s your soul telling you what to do next. Respect yourself enough to pay attention to it and you will find that your relationship will be better than ever.

If your man can’t accept the new and improved you, then it’s a clear sign that you can do better. Never paint yourself into a corner when you have a world of opportunities *and men* out there waiting for you. 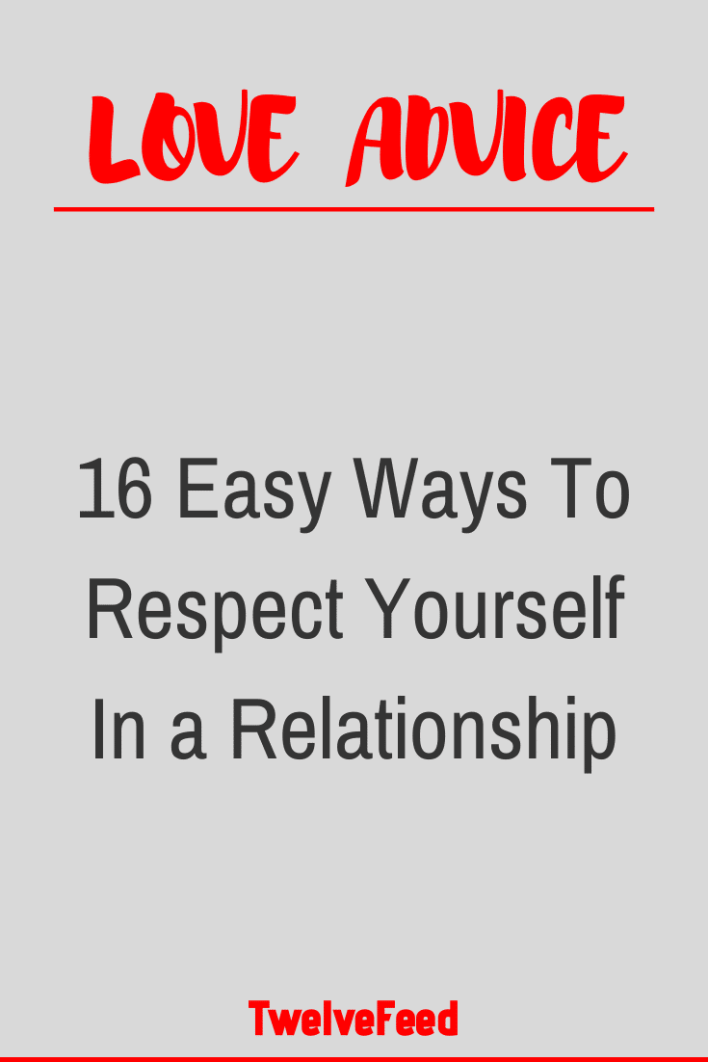 How to Find Your Fictional Character Crush In Real Life

8 Subtle Signs Your Fling is Turning into a Relationship