It’s better to have a cork in your mouth than your foot, don’t you think?

Communication and trust are the cornerstones of a healthy, happy relationship. As a couple, you should both be able to openly and honestly talk about how your day went, your fears, your past, and your plans for the future. But is that always the case?

While you may have come to a point that you are completely comfortable with your super understanding and eager listener of a girlfriend, and that you have a knee-jerk reaction to share everything with her, there are still a few things that you should be tight-lipped about.

Whichever category her reaction falls into, it’s just going to be downhill from there, so better keep your mouth shut about certain things.

16 things you should never tell your girlfriend

So before you put yourself in hot water by not watching what you say, we give you a list of things that you should NEVER tell your girlfriend.

#1 She put too much salt in the casserole. Avoid finding fault in the nice things she does for you, even if it’s a glaring mistake. Whether she put too much bleach on your favorite shirt and it’s now a curious shade of gray instead of blue, or she prepared your favorite dish all wrong, don’t go around pointing all this out before even showing your appreciation for the hard work she put into hoping to please you. [Read: 16 heartfelt ways to show your appreciation for someone you care]

#2 Her mother is a very nosy lady. Her mother might be irritating, conniving, and sneaky—she doesn’t like you even if you try your best to show your good intentions. But the thing is, to her, her parents are the best, kindest people ever. If you tell her anything negative about her parent or any member of her family, she will always be on their side, so better keep your thoughts to yourself.

#3 You cheated on your ex. Okay, you were a douchebag in the past and made a lot of mistakes you’re not proud of. But now you have a girlfriend and a clean slate, so don’t bring up your past indiscretions, or you’ll leave her doubting your fidelity and the relationship all the time. [Read: The right way to share details about your past]

#4 We used to go to this place. Another big no-no to tell your girl is the nitty-gritty of what was great about your past relationship. Even if she asks about it, it’s all a ploy, so you better keep your lips sealed. Likewise, don’t talk about how your last relationship sucked. [Confession: How a guy messed up by sharing too many details with his girl]

#5 Gary has been seeing another woman. It’s common for many couples to share juicy gossip about their friends. Often, men are as much of a gossiper as any woman. However, it’s totally uncool to share about your friend cheating on his wife or girlfriend because she might end up not liking your friends and not wanting you to hang out with them.

#6 I want my mommy. Women like to see their men as independent, capable beings. So when you tell your girl that you are still dependent on your parents, especially your mom, it *drastically* changes the way she looks at you. Although every adult guy depends on his parents for something, you shouldn’t admit this to your girlfriend.

#7 You’re scared too. While it’s nice to be open about your fears in life, try not to dabble on your little-boy fears. When your girlfriend tells you that she’s afraid of spiders or needles, don’t blurt out that you’re scared too. She tells you her fears because she wants you to be there for her and protect her, so if you tell her you have the same fears and do nothing to help her, she’s less likely to count on you anymore for her other fears.

#8 That’s Katie’s couch. So you regularly invite her over, or you have plans of asking her to move in. The last thing you’d want her to know is that a lot of the fancy decorations she likes in your place are actually done or given by an ex or two. Though you don’t have to throw away that expensive couch from your ex or that baseball memorabilia gifted by someone you dated, it’s best to just pretend that everything you own is actually yours. [Read: 10 signs the two of you are ready to move in together]

#9 Your movement. In the bathroom. Or worse, that accidental one in the bus. She doesn’t want to know about your gross bodily fluids and how they move in and out of your body. While you are proud of your regular schedule and how you were successfully potty trained early, she would rather be kept in the dark about the gross details of your bowel movement.

#11 You spend hundreds of dollars a month on tailored suits. Until you both share a place and bank accounts, you don’t need to tell your girlfriend where your money goes or how much you spend on certain things, like your clothes, your night out with the boys, your gadgets and video games, and other things.

#13 You’re a 27 man. Even if you’re very proud of your sexual conquests, you should never EVER tell your girlfriend about your number. It may be okay to brag about this to your friends, but to your girlfriend, your total number will always add up to 5 or more, whether you told her the truth or not. To give her some peace of mind, just give her a decent *small, very small* number and leave out your drunken hookups and one-night stands.

#14 You don’t like her hair. Women always complain about how they look or are always insecure whenever they do something drastic about their look or their hair. Your girlfriend asks you about her appearance for the sole purpose of you telling her she’s beautiful and reassuring her, so keep out the honest bug and don’t make her feel even more insecure by pointing out her physical flaws. [Read: 10 annoying girlfriend habits that almost all men hate]

#16 That you’re right. No matter how much you want to gloat about how right you were all along, it will not make your girlfriend like you any more if you tell her you were right and she was wrong in your typical “I told you so” gloat. It may feel very good to say it, but you shouldn’t. [Read: 8 phrases your girl would definitely love to hear from you]

Sometimes, it’s not what you say, but how you say it. So even if you know in your heart that you’re telling the truth *and your parents raised you to tell the truth all the time,* the harsh truth often hurts—and you don’t want to hurt your girlfriend, do you?

So whether you are itching to tell her about your cheating, your best bud’s latest conquests, your huge trust fund, or just about to blurt out how her legs are quite hairy, stop and have some restraint. [Read: 9 words and phrases every man needs in his arsenal]

Some truths can be brutal and may scar your relationship unnecessarily. However, if you feel like you really must say it, think about how you are going to say it first in a way that is lighthearted, constructive, and positive, and that’s something that will only make your relationship better instead of worse. 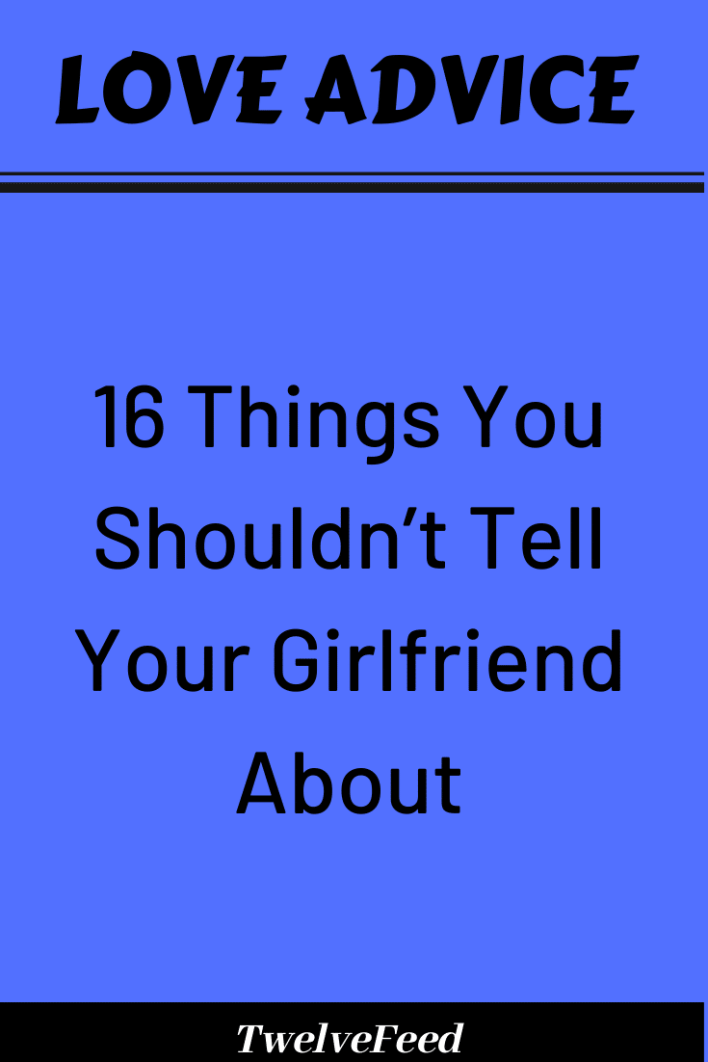 Why Your Sadness Has Been Lingering For So Long, Based On Your Zodiac Sign

Not Attracted to Your Partner? 9 Ways to Spark It Up