Much like you, your boyfriend also needs to feel loved every single day. He needs more than just a few romantic words. It doesn’t really take much to make your boyfriend feel loved or you don’t always have to prepare something grand to make him feel giddy. Most of the time, even your simple gesture can make his day.

A successful relationship requires effort from both partners. To give you some good ideas on how to do your part, here are 18 ways to make your boyfriend feel loved.

1. Compliment him.
It’s rare for a guy to receive genuine compliments. But girls aren’t the only one who likes to be told they look good, smart, or sexy – of course, guys love it too! Tell him all the good stuff about him, tell him he looks hot with his white shirt, or let him know how much you love smelling his scent. By acknowledging your guy with genuine adoration it will make him feel loved.

2. Appreciate him.
If he picks up your dress from the cleaners, fills a glass of water for you, or serves the food for you, thank him properly for doing it. Don’t take him for granted even if it is just a simple gesture, as much as possible notice and appreciate it. Rolling a quick “thank you” off your tongue isn’t hard and it’s worth it when it will make him feel valuable and loved.

3. Don’t reject him.
Don’t ever reject his efforts to make you feel happy. If your boyfriend messes up the kitchen just a little while preparing a breakfast for you, don’t scold him for that because he’ll feel stupid for trying to do something nice for you. Instead, just be happy that you have someone who exerts so much effort to make you happy. So, don’t ever try to make him feel rejected. By appreciating him, he’ll feel loved by you. `

4. Support him.
Supporting your boyfriend is an important aspect of a relationship. If you know he has certain passions in life, give him encouragement. Be his cheerleader, motivate him to pursue his passions and goals in life. You can also show emotional support when he’s open, like listening actively and acting as his anchor.

5. Give him space.
All relationships require space from time to time to continue building on the intimacy and the bond that you share. Give him the freedom to be with himself, family, friends, or even his teammates at work. I’m sure he’ll feel seen, heard, supported, and loved.

6. Show him he is a priority.
Time is the most valuable asset we can give to someone because we can’t get it back after we spend it. So, use it wisely in your relationship. Make your boyfriend feel loved simply by showing him he is your top priority.

7. Give him long hugs.
Guys love warm and long embraces. They often communicate physically and it’s a language they instinctively understand. Hugging your boyfriend a little longer and tighter will show him how much he is loved by you.

8. Listen to him.
Pay attention to him and leave your phone out of your hands when he talks to you. Just as you want him to listen to you; he wants you to do the same to him. In this case, he’ll feel like you truly care about his thoughts and opinions.

9. Let him realize that you miss him.
When letting your boyfriend know how much you miss him, do it in a creative way – like sending him a text while you’re on your work break, taking videos of yourself at places that are meaningful to the two of you, or simply tell him just how much you miss him and how eagerly you’re waiting to see him again. 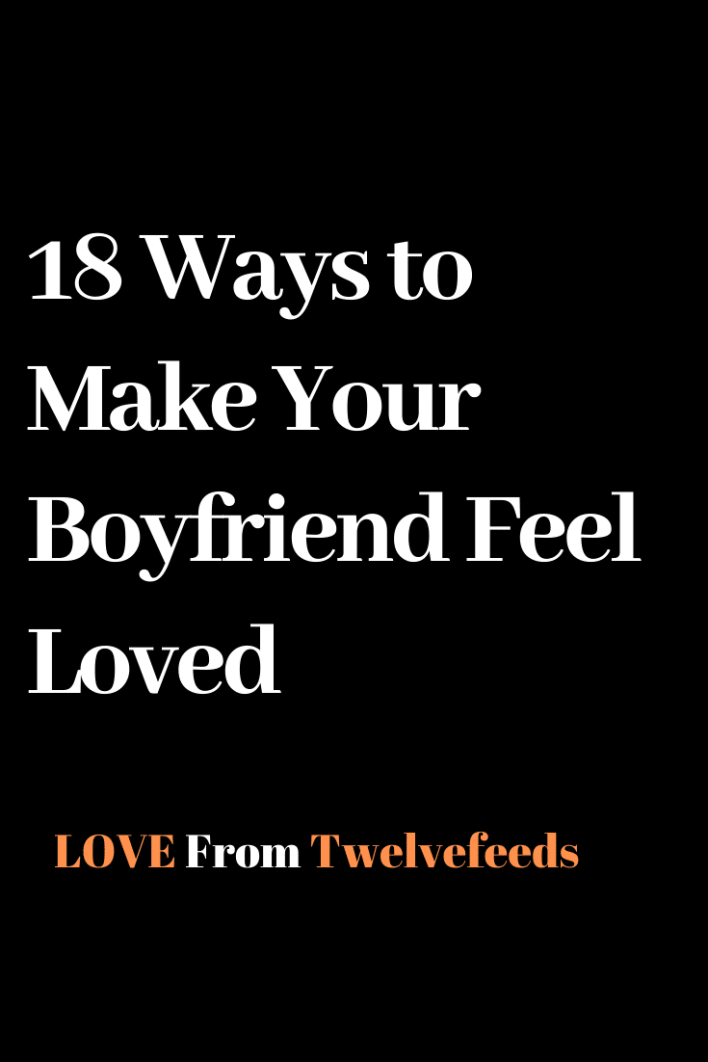 10. Trust him.
If you trust a guy, it subconsciously reveals to him how important and how special he is in your life. So, as much as possible share your secrets with him or tell him everything he wanted to know without any hesitations. In that case, you’ll make him feel loved.

11. Surprise him.
Surprise him by cooking his favorite dish, send him love notes, or plan a trip just for the two of you. Show him that not only girls deserve surprises and let him feel that he is loved by doing something special for him.

12. Be proud of him.
Show to the whole world that he is your guy and how much you love him by introducing her to your friends. Never let him feel like you’re taking him for granted, instead show him how blessed you are to have him.

13. Get his opinion.
Asking your boyfriend for opinions only shows how you respect and value his thoughts enough to do something based on his judgment.

14. Be affectionate.
Affection is something all people want and all people need. So, if you want your boyfriend to feel loved, show him your affection. Hug him, kiss him, hold his hands in public, cuddle with him, or show him you’re willing to put things in your schedule aside just for him.

15. Show him you’re jealous.
Yes, if girls like to see their partner getting jealous to make them feel loved by their boyfriends, guys also want to feel the same. However, don’t overdo it. Just let your guy know that you’re reasonably jealous and you don’t allow your one and only boyfriend to have other girls.

16. Do not control him or force him to change.
Do not be a dictator but be an inspiration to your boyfriend. Forcing him to change his lifestyle – like the way he dresses, talks or behaves in front of people will only make him feel that you don’t love or accept him the way he is. Try to be compassionate and understand his ways. If you want to change him for the better, do not control him but inspire him by becoming a role model. In other words, be that change you want to see in him.

17. Forgive him.
We all do mistakes. But if God, who loves us, can show mercy and forgiveness, why can’t you do the same? Make your boyfriend feel truly loved by getting rid of your pride and by forgiving him for his errors, especially if they aren’t intentional.

11 Signs Your Girlfriend is Faithful and Not Cheating on You