The choosing of a pet name sometimes happens organically. This could be in response to a moment in time, a shared event, or an in-joke between you and the girl of your dreams. Sometimes, however, it is a process of deliberate choice, as there comes a time in every relationship where a pet name seems conspicuous by its absence. And guys, we all know it, women do pick up on these kind of things so quickly.

The lack of a pet name so many months into a relationship can easily be misconstrued as a lack of care or love for the lady who actually rocks your world. So, no matter how alien it may seem to some of us guys, the choosing of a pet name is a little thing that can help avert relationship decay later down the line.

Choosing “a” pet name isn’t the same thing as choosing the “right” pet name, and sometimes, only you are going to know exactly what works. Your other half may have a fabulous sense of humor, for instance, and prefer a pet “insult” to something traditionally sweet and sickly. On the whole though, the issue of what works and what doesn’t has a fairly tried and tested formula.

Avoid the demeaning, the patronizing, or the chauvinistic, for example, and stick with cute names that impart some kind of sense of value. Common sense is always key in these situations, but for those who struggle with practicality, the following two lists of good and bad female pet names should shed a little more light on the direction you should be taking. [Read: What the pet name you choose actually says about your relationship]

Pet names your girlfriend will love

Below is a list of terms of endearment that many women would appreciate. Sift through the list, and select one that would suit your partner’s personality.

#1 Honey. It’s sweet, it’s tasty, and it brings pleasure to all. How can this tried and tested classic fail to hit the mark? Do, however, resist the urge to shorten it to “hun.” Although this works among female friends, it sounds a wee bit patronizing when used by a guy.

#2 Princess. Don’t nearly all girls imagine themselves during their younger years, to be a princess who is whisked away by a prince charming? Having them recall their youth with this sweetest of compliments will receive a big thumbs up from most women, although a more tomboyish type might be less impressed.

#3 Sweetness. Like the first item on the list, sweetness infers that the object of this cutsie name has all the merits of femininity in obvious abundance. Another winner.

#4 Beautiful/gorgeous. Saying this as a stranger in order to impress a woman can come across as a bit forward and predatory. In an established relationship, however, it shows that you appreciate their many physical attributes, and that you are proud of how they look. This, in turn, will make her feel wanted physically as much as emotionally or spiritually – and every woman wants the full package, after all. [Read: 9 words and phrases every man needs in his arsenal]

#5 Angel. A celestial being, sitting on the right hand of a deity – the very image of purity and perfection. This name shows her how much you worship her, how high a pedestal you have put her upon, and she cannot fail to be impressed.

#6 Beloved. There’s a classical touch to this one, as if you’re quoting Shakespeare or Milton. For the lady with the romantic soul and an artistic bent, this seemingly olde world pet name will show her exactly how much she means to you, in a way that she can exclusively identify with. [Read: 9 ways to be a more romantic guy]

#7 Treasure/precious. Right at the beginning, I said how choosing the right name was about associating the favored term with some kind of value. Well, these choices provide a rather literal interpretation of that concept, showing her that she is the diamond in your heart. One caveat, don’t refer to her as MY precious, otherwise, she’ll think you’re comparing her to the ghastly Gollum from Lord of the Rings!

#8 My heart. Not only does she exist in your heart, but she has replaced it. That, at least, is the connotation that this particular offering imparts, where your love for her is so all-consuming that there is no room left within it for anything else.

#9 Blossom. One of the rarer pet names on this particular list, but it offers a very uniquely beautiful image. As anyone who’s witnessed the blossoming of cherry trees after a long harsh winter will tell you, there are few sights in the world so beautiful. And who could resist being compared to that?

#10 Dearest. Again, the inference of this pet name is that you’ve placed them in your heart above all others, beyond compare or reproach. There’s no woman alive who wouldn’t appreciate knowing that she’s knocked the stuffing out of the competition – at least in your eyes. [Read: 50 really cute lines your girl would love to hear]

Awful names you should never call your girlfriend

#1 Sweet cheeks. This has quite an insulting feel to it. It sounds quite basely physical, and additionally, of all the things about her that you could have chosen to focus upon, this is the best you could do? Shame on you!

#2 Babe. Gets used a lot, this one, and much like “hun,” it’s fine among female friends. However, when a guy uses it, it sounds downright patronizing – like you just don’t take them very seriously. Definitely one to avoid.

#3 Cuddles. Cuddles, cuddly-bunny, Miss cuddles…whatever the variation, it just doesn’t work. Why? Because anything to do with being cuddly is a thinly veiled alternative for “fat.” Even the emotionally vaguest of you guys out there should realize the pitfalls of that particularly poor choice of words!

#4 Boo. This one’s actually quite popular at the moment, but it has some fairly demeaning connotations. It tends to imply a temporary nature to the relationship, as if it’s not quite serious enough to ever develop into anything. At worst, it describes something more akin to a booty call than a proper meeting of minds.

#5 Pudding. People really do use this one. It’s hard to believe, isn’t it? My only advice, unless your significant other is happy to be compared to a rather unattractive comestible, is to find another alternative as quickly as possible!

#6 Sugar lips. There’s an overtly sexual undertone to this one that may be fine for use in private, but she’s unlikely to appreciate in company. Best avoided.

#7 Puppy. Puppies are fine, right? They’re sweet, cute, and every shade of sugary loveliness in-between. That is, of course, until she thins her lips, put her hands on her hips, and demands angrily, “So which am I, a dog or a bitch?” See what I’m saying? Ditch or be ditched!

#8 Dear. There’s nothing wrong with this one, which is a simple contraction of “dearest” from the good list. However, not only does it sound very drab, uninspiring, and like something your father would say, but it also sounds a bit half-assed. Dearest shows they’re at the pinnacle of womanhood in your eyes. Dear, like they’re part of the furniture.

#9 Baby girl. Euuughhh! Creepy on so many levels. It sounds inherently weird, like something a 1950s sailor would say on shore leave to a prematurely toothless hooker. However, there are other connotations in this phrase that leave a distinctly sour taste in the mouth. It might have worked in an earlier and more innocent era, but it certainly doesn’t anymore.

#10 Sexy mama. Again, creepy. Why would you make a reference to a female member of your family when trying to impress the object of your affections? Never mind the fact that you sound like you’re trying to butter up an elderly matron. 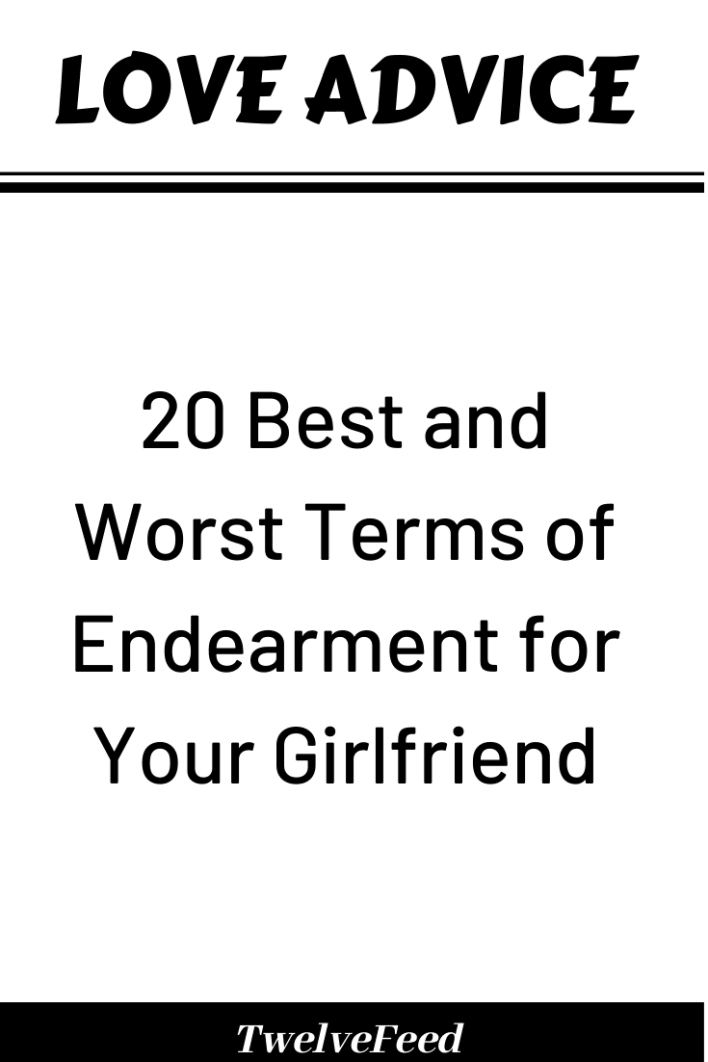 11 Determined Ways to Get Over a Breakup That You Caused