Is a guy ignoring you or giving you the cold shoulder all of a sudden?

I get it, it feels miserable.

But to actually get to the bottom of it all, and try to bring some meaning to all the confusion, you need to clear the clutter in your mind, and think rationally.

Before we go any further, here are a few questions you need to ask yourself.

Just how exactly is this guy ignoring you? Can you think of the ways?

Did he show interest in pursuing you at some point in time, only to ignore you completely right now?

Does he say he loves you, and yet, ignores you?

Understanding why and just how you’re being ignored can actually help you streamline your thoughts and focus on the problem, without really letting the other confusions get in the way.

Why does a guy ignore a girl?

As a guy, I can tell you this straight away. Guys don’t ignore girls, especially if they like them.

It’s not easy for a guy to play hard to get, and it’s almost impossible for a guy to tease a girl and ignore her if he truly likes her. Of course, if he’s just toying with her feelings, then perhaps, he may find it pretty easy to take it easy, play it smooth and mess her mind up until he drives her crazy in love!

But in all other circumstances, guys almost always wear their hearts on their sleeve, and they’re pretty vocal about their feelings for a girl they consider special. [Read: How guys really fall in love – The 7 stages of love for men]

The 3 big questions to ask yourself

So if you believe a guy you like is actually ignoring you, you need to ask yourself these three questions in the first place.

#1 Is he really ignoring you? Has he shown significant interest in you that leads you to believe he has feelings for you in the first place? Or were both of you just in a scenario where he had to spend time with you, and now that the moment has passed, he’s moved on with his own life? [Read: 20 circumstances when a guy may never ever want to date you]

#2 Why do you think he’s ignoring you? Did you notice any clear signs recently? Is it something you said? Focus on all the ways he’s ignoring you, and ask yourself if you’re sure you are being ignored. And try to recollect the time period when he started backing away from you.

#3 Does it matter? This is the most important part of it all. Of course, it hurts and annoys you that you’re being ignored by a guy you think is pretty special. But in the grand scheme of things, does it matter to you? Do you see this guy as an integral part of your future? And finally, is he worth the effort you’re putting into trying to understand why he’s ignoring you? [Read: 20 ways to stop thinking about someone you still like a lot!]

Do you really need to know why?

Sometimes, trying to understand why a guy is ignoring you is just not worth the effort. You could ask him, but in all probability *if he’s truly ignoring you*, he may just lie to you and pretend like everything’s normal. *while continuing to ignore you at the same time!*

So, the bottom line here is that you can never really know why he’s being distant for sure.

But here’s the catch, the reasons why a guy ignores a girl aren’t many. And unless this guy is from another planet, in all probability, you’ll know just why he’s choosing to pretend you don’t exist just by reading a few signs and making your own deductions. [Confession: I miss him so much but I don’t think he misses me at all!]

20 sure reasons why a guy could be ignoring you

#1 He’s losing interest in you slowly. He was infatuated by you when he first met you, but as time passed, he’s probably getting bored or has found something better to do.

#2 You misunderstood him. He isn’t interested in you in the first place. He never really liked you “that way” but you just misunderstood him and assumed he was in love with you. [Read: Does he like you? – 18 body language clues that’ll give the truth away!]

#3 Light love. He’s more easy going about love, and takes it easy in the relationship. He probably doesn’t read fairy tales or romance novels, and doesn’t really think a relationship is that big of a deal just yet.

#4 Awkward! He doesn’t really like you, and feels too awkward to admit it. He’s flirted with you, but now his wise mind has convinced him that ignoring you is a better alternative to telling you that he’s not interested.

#5 The good life. He’s got something more exciting going on in his life, and he’s forgotten about you, at least at this point in time.

#6 Confusions. He’s confused about his feelings for you, and he’s decided that taking a step back and avoiding you for a while can give him the time he needs to make up his mind. [Read: How to read mixed signals from a guy and turn it into love]

#7 Expectations. You think he ignores you if he calls you over the phone less than three times a day. He thinks speaking to each other once a day is being clingy! Both of you have different expectations from each other, and one of you ends up feeling ignored.

#8 Moral dilemma. He’s cheating on his girlfriend or wife with you, and as the noose gets tighter around his neck, he thinks walking away from you is the best thing he can do. [Read: A guy with a girlfriend likes you… now what?!]

#9 He doesn’t care. He’s probably not ignoring you intentionally. He just doesn’t care enough about you to think about you or your opinions.

#10 Space. You’re too clingy and needy, and he just wants his space. And you think he’s ignoring you. [Read: 13 clingy girlfriend signs and how to avoid them]

#11 Imbalanced love. You just love him more than he does. And no matter what you do, you’ll always be the one feeling miserable. [Read: The 20 kinds of lovers that exist in the world]

#12 The busy guy. He’s truly busy, and as much as he wants to spend time with you, he’s just got other priorities that need his time and attention.

#13 The love triangle. He’s started liking someone else, and you’re taking up less space in his thoughts. [Read: Love triangles and its confusing complications]

#14 Not into you. He was never into you, and you’ve just been misreading the signs all the while.

#15 The honorable guy. He’s realized that you actually like him and he doesn’t want to lead you on.

#16 Priorities. Both of you have evolved over time. He has different priorities in life now, and you’ve just been dropped down a notch or two. [Read: Should you ever make someone a priority when you’re only an option to them?]

#17 You’re too easy.  Sometimes, a guy likes a good chase to know that a girl is worth it. And now that he’s snagged you easily, he doesn’t find wooing you or impressing you much of a challenge. [Read: How to attract a guy and make him stay in a way he can’t resist!]

#18 Wandering eyes. He thinks the grass is greener on the other side. Even though he likes you and thinks you’re a very nice person, he thinks he can find someone better.

#19 The scary kind of love. He likes you too much, and it scares him. He thinks it’s better to ignore you now, than fall madly in love with you and get walked all over by you in future because he doesn’t believe you would love him back. [Read: How to get a shy guy to talk to you and ask you out]

#20 He’s just a selfish guy. He’s used you, and now he’s over you. He probably hops from one girl to another. He sees no reason to stay in touch with you and pretend like he cares!

Reading these 20 reasons why a guy could be ignoring you can hurt. And just writing it down makes me feel bad about it. But you know what, we’ve all been there. Now all you need to ask yourself is what you intend to do about it. [Read: 13 easy ways to avoid falling in love with someone you like]

Is this guy worth pursuing? Or should you keep some distance and ignore him back?

There’s a big chance that ignoring him in return may actually make him want you back, just when you’re on the verge of completely getting over him! Sucks, but almost always true! 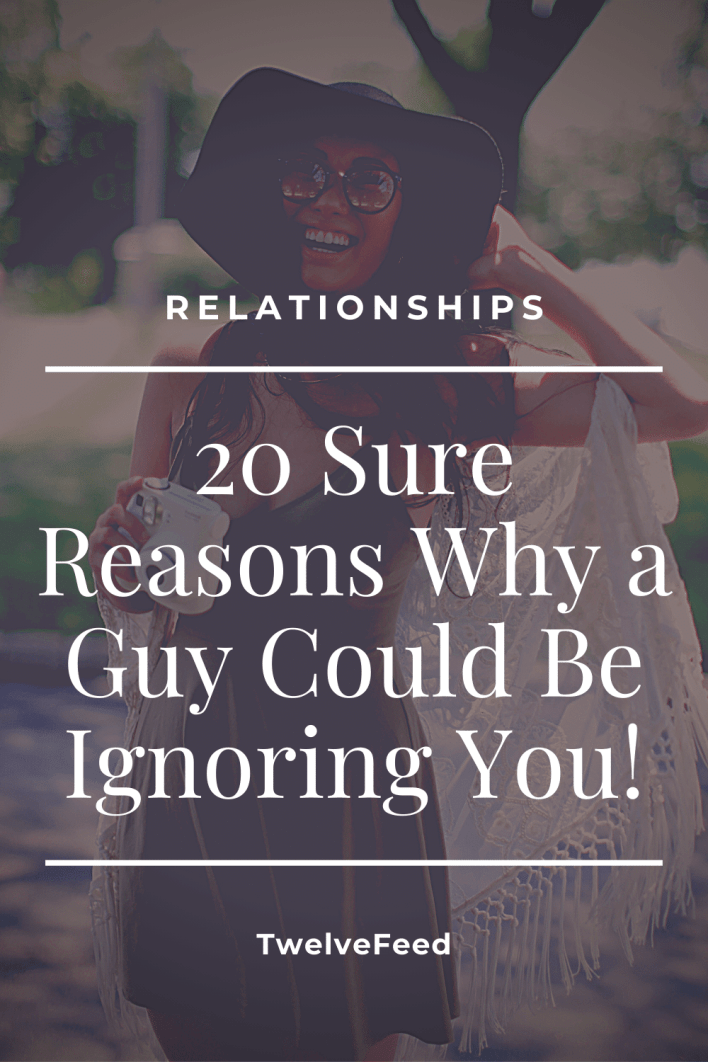 Good Vs. Bad – What Kind of Guys do Girls Like?

How to Stop Feeling Ignored by the One You Love