When you first fell in love with your guy, you may have believed that he’s the best boyfriend in the whole world.

He woos you, awes you and impresses you.

But as the days turn to months, something begins to change.

He seems more distant, or worse, he doesn’t have time for you anymore.

If you’ve experienced this stage in the relationship, perhaps it’s time for you to take a deeper look into your relationship.

[Read: The 9 relationship stages all couples go through in love]

How guys fall in love

Of course, they’re infatuated by you from the very beginning.

But love takes a while to kick in.

As he woos and pursues you, he gives it his all to get your attention and make you fall for him.

But once he wins you over completely, that’s when he starts to analyze just how much he wants to be with you.

A man’s mind is programmed to sow his seed. And when he’s done with the deed, he twiddles his thumbs and wonders what he’s supposed to do next.

Should he stay in love with you, or should he just get back to hanging out with his friends and ignore you?

Are you worth sacrificing his lifestyle for? And most importantly, are you worth loving forever considering the fact that being with you means he can’t sow his wild oats into any other woman for… ever!

[Read: How guys fall in love – The seven stages of love for men]

Why do guys fall out of love?

The infatuation period is always a blurry haze for both the sexes. And only when the magical dust of infatuation begins to settle does the real question enter the picture. Is it love or was it just lust?

And sometimes, the guy and the girl may just start to drift away from each other because they don’t communicate with each other.

Signs of a bad boyfriend

Instead of confronting the situation, a guy may decide to deal with it internally by distancing himself from you. And for a girl, this is the worst feeling in the world, the helplessness of knowing something’s not right, and yet having to tag along for the ride in pure misery and confusion.

The best way to know if you’re being used is by trusting your instincts. If something doesn’t feel right in your relationship, chances are, it isn’t! [Read: 7 signs he’s interested in you for all the wrong reasons]

If you want to nip the bad boy in the bud and walk out of the relationship before it hurts you or breaks you, just keep an eye on these 22 early warning signs of a bad boyfriend.

And if you do find your boyfriend in the wrong here, communicate with him so he can realize what he’s doing. After all, it’s easy to take something important for granted. But if he still continues to hurt you through his behavior, perhaps it’s time to walk out for good. [Read: How to let go of a relationship that’s bad for you]

#1 He takes time. He often doesn’t answer your calls immediately even if he isn’t at work. And he always takes a lot of time to text you or call you back even when he’s not busy.

#5 He’s emotionally closed off. An early sign of a bad boyfriend is his disinterest in talking about the future or his feelings. He says he likes living in the present, but still makes future plans about everything else but the relationship.

#6 He has a lot of secrets. And most of these secrets have names of different girls. He may be chatting with them on social networks or speaking with them over the phone now and then. And even if you ask him who these girls are or how he knows them, he just brushes the conversation off or avoids talking about them.

#7 He’s controlling and manipulative. He’s seems very concerned about you and always tries to advise you on how you should lead your life. And as helpful as he seems, somehow you feel very stifled and suffocated in the relationship. [Read: 15 subtle and shocking signs of a controlling boyfriend]

#8 He’s in touch with his ex. Does your boyfriend stay actively in touch with his ex, even though there’s no reason to? Both of them don’t work together, nor do they meet as friends in a group, but yet, he insists they’re good friends. And surprisingly, he doesn’t seem enthusiastic about you joining them each time he meets his ex. They’re just friends, right? [Read: 13 secret signs your boyfriend’s still not over his ex]

#9 He’s a smooth late night talker. He regularly talks to another girl almost every night, late into the night. This may be harmless to begin with, but late night conversations between attractive members of the opposite sex almost always have a way of going down the lane of flirty friends or emotional affairs. And it’s best avoided. [Read: 18 emotional affair signs you probably never noticed!]

Tell him you’re not comfortable with the idea of him talking regularly to another girl late at night. If he cares enough about you, he’d understand your fear.

#10 It’s always about him. Your boyfriend’s conversations always revolve around him and his problems. He’s not bothered about your problems or your life, and always cuts the conversation or changes the subject when you talk about yourself.

#11 He blames you. He blames you for his mistakes, shortcomings and failures at every chance he gets. “If only I hadn’t met you last night, I could have finished my work today!”

#12 It’s his way or the highway. He tries to boss over you or control everything you do. He always chooses what both of you should do when you’re with him. And if you choose to do something else, he gets angry or sulks the whole time.

#13 He’s abusive. He may be a nice boyfriend most of the time, but his anger may bring out another side of his. Has he ever hit you or threatened you with dire consequences when he’s angry about something? Walk out right now. [Read: 16 abusive relationship signs of a devious lover]

#14 He can’t get along with your friends or family. A guy who is serious about you would always want to impress your family and friends because he wants to make a good impression on them, so they can approve of your choice.

Conversely, your friends think he’s not a good guy. When you’re in love, it’s easy to be clouded by emotions. But good friends can always see a break up months and years before it actually happens. So if the friends you trust have a point of view, listen to them. And even if they aren’t saying it out loud that he’s a bad boyfriend, watch out for hints in the conversation when you speak about your boyfriend with them. [Read: Does he love me? – 20 sure signs to read his mind!]

#15 He doesn’t apologize. This is a bad boyfriend sign that can be noticed within a few weeks into the relationship. He has a big ego, and just doesn’t apologize for anything, even if it’s his own fault. He just mumbles something or blames something else for his mistake.

#16 He’s selfish. He forgets your special days, but sulks and whines if you forget any of his. He doesn’t try to help you with anything, but expects you to be there for him and support him all the time.

#17 He’s too busy. Some guys are just workaholics. It’s not your fault, and it’s not his fault. He just has other priorities that take too much of his time, and are more important to him. He may be a great guy, but he’d make a terrible boyfriend. You won’t be happy in the relationship, and he won’t be happy either. [Read: 23 must-know relationship advice for women]

#18 Fixed dates. He meets you only at certain times of the week as per his convenience. He can’t meet you on weekends neither can he talk to you in the evenings because he’s hanging out with his friends, and doesn’t want to be disturbed. But he expects you to be free to meet him or speak with him every time he calls or wants to meet you.

#19 He’s a liar. You’ve caught him lying quite a few times, even when there was no reason for him to lie. He just likes telling white lies, and he can’t help it. Dating this kind of a guy will only make you feel insecure because you just can’t bring yourself to trust him. [Read: How to stop lying to yourself and your partner]

#20 He’s overly jealous and clingy. He doesn’t trust you and acts cranky each time you meet a new guy, even if it was while having lunch with a group of friends. He absolutely hates it if you give any other guy in the room even a sliver of attention when both of you go out to meet friends. [Read: 10 ways to make your boyfriend feel a lot less jealous]

#21 He blows hot and cold. He’s moody and unpredictable. Sometimes he talks about anything at all, and at other times, he snaps at you for asking too many questions. He gets angry each time you prod deeper about his work or his day after he answers your questions in monosyllables or nods.

He blows hot and cold all the time, depending on his moods, and you have to tiptoe around him in fear because you just don’t know how to behave around him.

#22 He doesn’t respect you. This is the biggest warning sign of a bad boyfriend that you need to keep an eye on. You value something only when you respect it. But if your boyfriend doesn’t respect you, and treats you like you need him but he doesn’t need you, it’s only a matter of time before he starts treating you like dirt, and you’d start feeling like it too! [Read: How your self respect affects the state of your relationship] [Read: The dating girl code all girls need to know!]

It’s not easy to notice these warning signs of a bad boyfriend when you’re deeply in love with your man. But if something doesn’t feel right in your romance, keep these signs in mind and they’ll help you make the right decision. 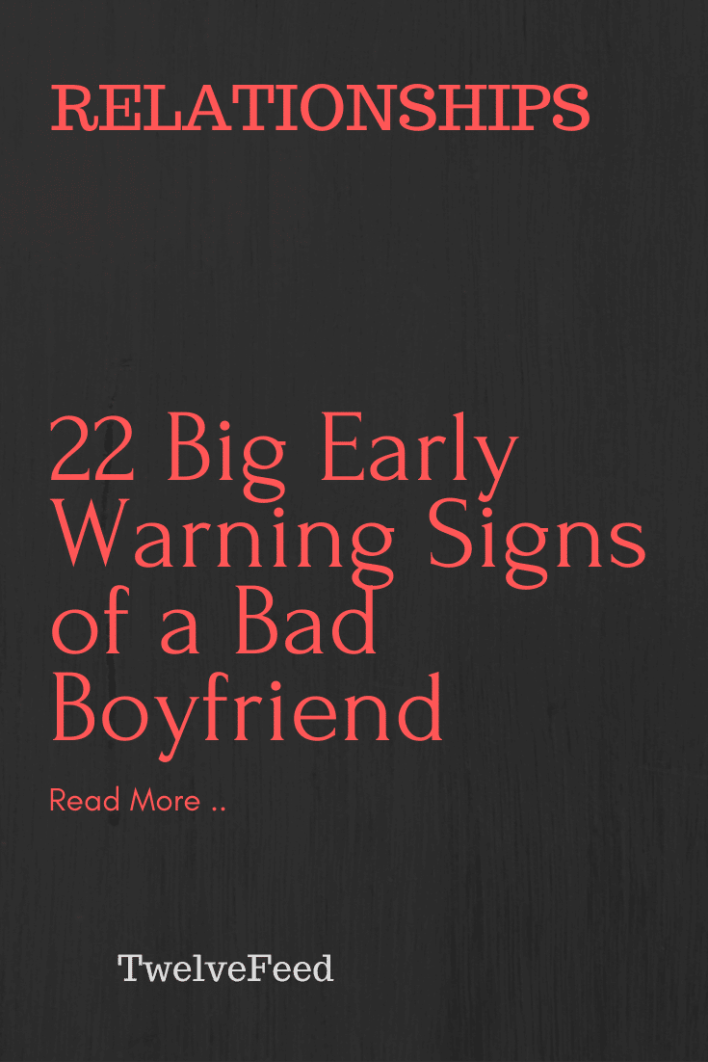 36 Sweetest Things to Do with Your Girlfriend