Often, people suck and relationships suck. What was once full of roses and sunshine turns into a nightmare, if not a freak show. You’ll find out that your partner doesn’t floss, or that he has a secret fetish for licking cat fur, or that he is just a common cheater. In such cases, breaking up is relatively easy.

But what about the other side? What if they’re nice, funny, smart, and attractive, but they just aren’t right for you?

How to end a relationship the clean way

Well, you don’t have to stick around unhappily in a relationship. There are legitimately mature ways to break up, and we’ve rounded up 25 of them.

#1 Make it tailor-made. Breakups must be done according to your relationship. You’re the only one who knows your partner intimately, so think about what you will say to them and how you will say it. [Read: Sample conversations and phrases to break up with someone you love]

#2 Consider timing. While there really is no “good” time to break up with someone, try to at least be sensitive to what your partner may be going through. Deliver your breakup while your partner is not stressed with other parts of their life, or undergoing deeply traumatic events such as the death of a family member.

#3 “It’s not you, it’s me.” While saying these exact words is cliché and will likely have your ex bawling their eyes out over your lack of creativity, it’s still important to mention concrete reasons why you’re not fit for a relationship with the person.

#4 Be specific. And stay specific. If you’re breaking up, be specific as to where you’re coming from with your decision. Cite specific situations, but deliver them constructively, and in a way that they may come out of it broken-hearted but still a better person.

#5 Sensitivity. You may find yourself relieved to finally end a relationship and be free of a person that has made you sad for some time. But don’t go into the breakup all grinning and jolly. Expect surprise, denial, tears, hurt, anger, and a rollercoaster of emotions from the other party.

#6 Last to know. Never, EVER go around telling everybody that you want to break up with your partner. Chances are, this story will find its way to your partner before you have the opportunity to break the news to them—making the breakup even more devastating and humiliating. [Read: 12 undeniable signs you’ll break up in a few months]

How to break up maturely and nicely

#7 Be crystal. Be clear that the breakup is absolutely over. Avoid any talk on that remote possibility that you may one day cross paths and find a way back together in the future, because this will just give them false hope.

#8 Shut it and seal it. Make sure there is closure. If you’re honest about yourself, that you don’t see a future with them, then tell them that it’s absolutely over and that they should move on with their lives—without you.

#9 Make it personal. There’s nothing worse than a person who can’t sum up the courage to break up with someone face to face. So even just for the sake of tact, break up with the person face to face and never via text, call, instant message, or social media.

#10 Anger management. Don’t break up with someone out of anger. This will just end up very badly, with nasty words thrown against each other, and when the anger fades, you may still end up in love with them. However, with all that’s been said and done, they may not feel the same anymore. [Read: 14 valid reasons that justify a break up]

#11 Don’t overdo it. Yes, you’re wracked with guilt. But don’t go breaking up with your partner all sobbing and near-hysterical. This is just tasteless, especially if it’s insincere. Compose yourself and be level-headed when facing your partner, so you can better express yourself and approach the situation maturely. That way, you can expect them to be mature about it, too.

#12 Fake it? Alright, so you’re breaking up with your partner because their breath smells funny, or they have weird quirks in bed that you just can’t stand. Despite the breakup, your partner still deserves the truth. Have some dignity for your relationship, and don’t lie your way out of it.

#13 Brutal honesty. While being honest is always the best policy, especially in breakups, it’s still not good practice to let yourself go. If you’re breaking up with your partner because you don’t like the way they look or talk, don’t crush their ego and spoil them for future relationships by being too brutally honest.

#14 Short and sweet. The more you say, the more you might say wrong. So better to keep things short, if not sweet, when breaking up with someone. The “talk” shouldn’t last over 30 minutes, so the sooner you’re done with it, the sooner both of you can get on with your lives.

#15 Don’t engage. While things can get pretty messy and out-of-hand, as your partner may be overcome with intense emotions, it wouldn’t help for you to be part of the drama, too. If they get angry and verbally abusive, reign in some control. Let them just get it all out and then make your exit. [Read: The right way to end a relationship that’s bad for you]

#16 No defense. As you talk to your partner about the breakup, your partner may bring up some points about you, too. They may even try to say anything just to hurt you back. Don’t fuel the fire. Besides, there’s no use defending yourself, because at this point, there’s no changing what they are thinking about you now.

#17 Stop hovering. When you break up with your partner, you may feel bad, as you see your now-ex is devastated with what’s happened. As tempting as it is, try not to call them in the following days or weeks to check up on them, nor should you try to comfort them. This will only make things worse.

#18 Someone else. NEVER tell your partner that you’re leaving them because you met someone else, or are already dating them. Nothing good will ever come from it, and it will just make the breakup even nastier.

#19 Take one for the team. When you’re telling the reasons why you’re breaking up, don’t dump all the blame on the other person. After all, it takes two to tango and you may have *or haven’t* done your part, too. Instead of being accusatory, lessen the pain and allow the other person to leave with a little dignity. [Read: 14 common reasons why relationships fail so often]

#20 Ghosting. If there’s anything crueler than breaking up with someone electronically, it’s breaking up with them and not giving any explanation. It’s like you just left them without any trace, and this will make them even more confused, forever searching for closure as your sudden disappearance haunts them. [Read: What is ghosting really and how does it work?]

#21 Carrot on a stick. After you break up with a person, don’t stick around and leave them hanging on to any hope that you might go back to them. Stop stringing them along and treating them as your backup relationship.

#22 Gossip-mongering. Don’t gossip about your partner or about your breakup before or even after the breakup. This will not only hurt their ego, but make matters worse and even cause potential, yet unnecessary, fights between both parties.

#23 Break up sex? Breakup sex might be a good idea, but you have to choose the right timing when it comes to telling the other person you’re breaking up with them. Don’t do it right after the deed, but choose a moment when you’re both level-headed. [Read: Break up sex and 10 circumstances when it’s perfectly acceptable]

#24 Post-break up sex? While breakup sex is common among many couples, having sex right after breaking up is a big no-no. There’s nothing more that you need to do to make the separation easier for your partner, and the least you can do is offer a compassionate touch, not a lay in the hay.

#25 Be kind. Think about how it would feel if the other person was the one breaking up with you. Would you like to hear the same reasons and clichés as you are about to tell them? How would you like to be treated? Keep in mind the Golden Rule as you sit down and choose your words of goodbye. [Read: 20 sure signs your relationship is over way before you decide to break up]

Breaking up with someone with whom you have spent a lot of good *and even bad* times can be very difficult. However, if you keep in mind all the 25 tips listed here, you will learn to do it in a way that saves you both a lot of drama and heartache. Who knows—you may even provide some relief to your unsuspecting soon-to-be-ex too, and you will both come out of the relationship as better people. 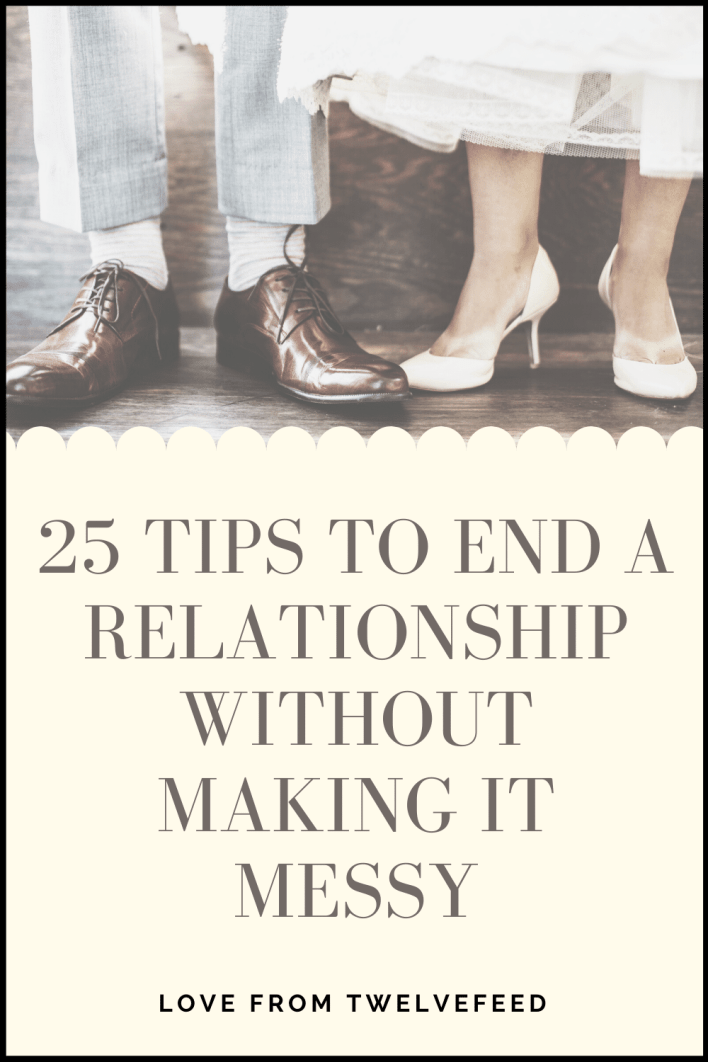 This Is The Honest Truth About Why They Can’t Get Over You, Based On Your Zodiac Sign

Why I Never Should Have Gotten Married – A Confession